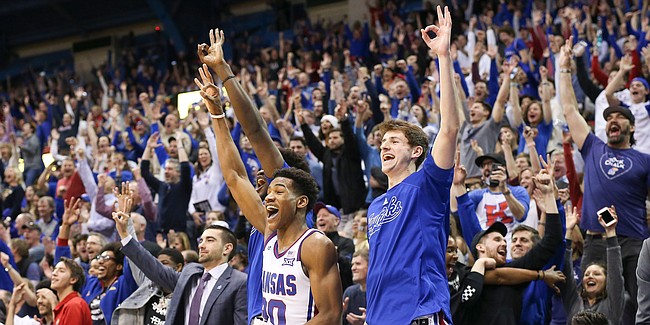 According to a source close to the program, Kansas guard Garrett Luinstra is planning to transfer this offseason.

Luinstra, a walk-on from Free State High who played 11 minutes in 10 games during his freshman season with the Jayhawks, has officially entered the transfer portal and will spend the next couple of weeks searching for a new school.

Luinstra came to KU after averaging 19 points per game and earning all-state and Sunflower League Player of the Year honors during his senior season at Free State.

The 6-foot-2, 155-pound shooting guard who twice earned all-league honors and whose father, Brian Luinstra, was a trainer who died in the tragic Oklahoma State men’s basketball plane crash in 2001, set Free State’s single-season scoring record by recording 456 points during the 2017-18 season while leading the Firebirds to the Class 6A state title game.

Luinstra was one of four walk-ons slated to be on the KU roster for the 2019-20 season, joining junior Chris Teahan, redshirt freshman Elijah Elliott and true freshman Michael Jankovich, the son of former Bill Self assistant Tim Jankovich, who recently announced his intentions to join the KU roster this summer.

Luinstra finished his lone season with the Jayhawks scoreless, shooting 0-for-3 from the floor and 0-for-1 from behind the 3-point line in his 10 appearances.

He also recorded one rebound, three assists, three fouls and a turnover.

This sucks! He was our best walk-on that didn't play.

You know it's bad when even our walk-ons are transferring........ why are so many players bouncing out? I hope this is just a case of a talented kid wanting to play more.

I’m willing to bet that almost every walkon hopes that they might break through to significant playing time at KU. Keep in mind that these are talented players with a lot of desire to play in real games. When it doesn’t happen, they have to decide whether being a practice player is good enough or should they go play somewhere. I wish this kid the best of luck finding a school where he’s out on the court at crunch time.

A lot more transferred out then transferred into KU basketball this year. The year before we had 3 transfer in. I think it mostly goes in cycles among the top teams and players looking for quality minutes (on TV).

Anyways Garrett, thanks for coming to Kansas, good luck to where ever you go.

Who cares. He’s a walk on. Keep a walking.

As a walk-on, I would hope that he wouldn't be penalized with the the idiotic "sit out" rule written by the millionaires who don't follow the same rule because, well, they are better than that.

Good luck to this young man. He just wants to play. He pursued a dream, maybe it didn't work out how he hoped, but now he has a clearer vision of what's important to him. Given his high school stats, I think there are quite a few collegiate programs who would benefit from his participation. Best to you and RCJHK!

Walk ons expecting minutes at KU their freshman year are, well, confused. Expecting minutes your sophomore year, you're just full of irrational exuberance. I'm sure he'd just like to play ball, and that's not reality at KU .

What about some of the local schools like Washburn, etc.