With any college football coaching regime change comes adjustments for the players who spent the previous season — or longer — studying, practicing and executing a specific set of plays.

At the University of Kansas, where Les Miles this past November took over a wobbling program that has won three or fewer games each of the past nine seasons, some modifications will be more drastic than others.

While Miles has no intention of revealing much of anything about the Jayhawks’ offense, those who check out KU’s spring game on Saturday night at David Booth Kansas Memorial Stadium are sure to notice at least one significant modification from the old, so-called Air Raid offense of recent years past.

Redshirt senior Carter Stanley, who spent each of the past four seasons operating in offenses implemented by former head coach David Beaty, said the most substantial adjustment for him has come when he lines up to take a snap. 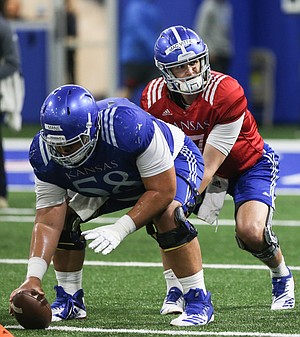 Miles and his offensive coordinator, Les Koenning, aren’t disarming shotgun formations — they appear likely to remain a staple of the offense. But the Jayhawks’ playbook does look quite different now than it did a year ago, with the mere inclusion of under-center plays for the quarterbacks.

“For the most part, all the route concepts are all stuff that I’m familiar with,” Stanley said, before describing what’s most dissimilar for him offensively. “But just getting comfortable with under center and play-action passes (from under center).”

A 6-foot-2, 198-pound redshirt senior from Vero Beach, Fla., Stanley pointed out he and other Kansas QBs practiced some under center the past four years. Those situations were just relatively scant, because in the past such formations came as a part of the team’s goal line package.

Outside of those reps, though, Stanley had spent much of his quarterbacking life lined up in the shotgun. For him, old school, under-center play calls last occupied his mind when he was in middle school.

“Like part of the offense, it’s been since eighth grade,” Stanley replied, when asked how long it had been since he had to regularly bend his knees, and get down low for a snap under center. “So nine years. It’s been awhile.”

Back then the offense Stanley worked in was orchestrated by his father, John, who served as the team’s youth coach. Stanley recalled he and his eighth-grade teammates ran some wing-T plays, but also some spread offense out of the shotgun.

“It was actually pretty similar to what we’re running now,” Stanley said of the variation. “It was a mix of both.”

At one recent KU football spring practice, during a period that was open to media members, Miles spent several minutes with the team’s centers and quarterbacks going over the finer details of snap exchanges that take place under center.

Miles even lined up behind redshirt junior center Api Mane to take a snap himself as both QBs and offensive linemen observed.

“He was just trying to assure the center and quarterback exchange,” Stanley said of Miles’ message, “giving tips on maybe how the center might rotate the ball when he snaps it. Coach Miles obviously has a lot of experience with that. But he was just making some alterations.”

When MacVittie spent his first two seasons at Pittsburgh, he said a good chunk of the playbook called for Panthers QBs to be under center.

True to form, Miles didn’t specify this week how much of the Jayhawks’ offense this spring has originated under center. But the former LSU and Oklahoma State head coach did explain what he likes most about that strategy.

“It’s just the ability to allow us to in game plan, to turn and attack the team the way it’s best to attack them,” Miles said. “So that’s the piece under the center, there’s some things that we do under center that we won’t do in the gun. And it makes a difference.”

KU’s head coach also indicated he thinks the formation suits “some” of the team’s quarterbacks.

As the QB competition between MacVittie and Stanley continues through the spring and possibly beyond, into preseason camp, MacVittie said both potential starters and KU’s other QBs are becoming “a lot more comfortable” working in the offense.

KU’s spring game is scheduled to begin at 6 p.m. on Saturday. It will be available to stream on ESPN+ and broadcasted locally and throughout the state on various cable platforms.

Hear me out. What if after Stanley beat Texas he just got the job and we're talking about a redshirt senior who has started for the past 3 years. How does that change the mood going into the season?