Heading into his fifth and final season with the University of Kansas football program, redshirt senior Carter Stanley has obtained a better understanding than most players on the team about all that has to go into mastering a playbook and then taking that process a step further and executing those plays on the field.

Stanley also happens to be the roster’s foremost expert on quarterback competitions, having been involved with one at some point or another each of the previous three seasons.

So what better person to ask about the Jayhawks’ current situation at QB, considering this is Round 4 for Stanley when it comes to vying for the most prominent starting job?

“I wouldn’t say it’s too different,” Stanley reported this past week, in the midst of his ongoing spring battle with junior and program newcomer Thomas MacVittie. “For me personally, you’ve just got to do the same thing — come out every day and bring it. Work with the receivers, get the timing down with the receivers. I wouldn’t say it’s too different. My approach is pretty much the same as it always has been.”

Both Stanley, a 6-foot-2, 198-pound senior from Vero Beach, Fla., who will graduate in May, and MacVittie, a 6-5, 215-pound redshirt junior from Cincinnati, Ohio, said this past week the reps at QB during KU’s spring practices have been split up fairly evenly between the two of them.

Said Stanley: “We go out there and we alternate for the most part.” 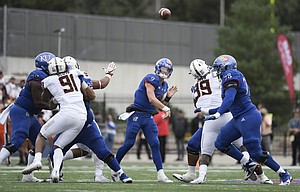 The only portion of the spring when Stanley felt a little behind was the last week of March, when he suffered a slight hamstring injury. That limited him in the team’s second scrimmage, on March 31. Stanley said at the time he couldn’t do much rolling out or fully execute on zone reads. But he said this past Thursday the hamstring is “a lot better” now.

But barring some unforeseen development between now and the Jayhawks’ 2019 debut, either MacVittie or Stanley figure to take the first snap of the Miles era at Kansas.

As Stanley has gotten to know MacVittie these past few months, and worked alongside him during meetings and at practices and scrimmages, the KU veteran has been impressed.

“He’s a competitor,” Stanley said of MacVittie, who played his 2018 season at Mesa Community College (Ariz.) “He brings it every day. Very fundamentally sound. He’s got a big arm. He’s fun to compete with.”

According to MacVittie, who began his college football career at Pittsburgh, but never took an in-game snap for the Panthers, Stanley helped him get acclimated at KU when he joined the Jayhawks as a mid-year junior college transfer from MCC.

“He’s definitely helped me, even in the weight room, too — first coming in we were only in the weight room,” MacVittie said of when he arrived in Lawrence, in January. “His doors were always open to me. He was always helping me out. I’d ask him a question, there’s no hard feelings, even with all the quarterbacks. We’re all very comfortable with each other. There’s no hard feelings anywhere. Everybody’s getting equal opportunity, so the cards will lie where they land, and we’ll see how this goes.”

Stanley easily possesses the most FBS experience among KU’s quarterbacks. Since redshirting during his first fall with the Jayhawks, in 2015, Stanley has appeared in 25 games and started nine.

With all the change that went on within the program at the conclusion of this past season, with David Beaty being fired and Miles and his staff coming in to take over, some wondered whether Stanley would return or look into the possibility of transferring to finish his career elsewhere.

The program’s veteran quarterback said, though, during his first interview since the program was overhauled that he was glad to stick around, even if meant going through yet another QB competition.

“I think I just owe it to this university, this state, just the people of KU,” Stanley said of why he wanted to finish his career with the Jayhawks. “I love KU. I always have. I love my teammates, love these new coaches. And it became a pretty easy decision for me. Just passion for the school.”

It is nice to hear of Carter's passion and dedication for the Uni and team even with a new program starting. It's also nice to see fairly reasonable stats for last year, and a nice improvement over his career totals. IIRC, the knock on him is his arm strength, which allows D's to crowd the LOS that much more.

when I read that he's graduating in May, all I could think of is that if he's not the starter coming out of spring ball, he's a goner...I hope not, I really like him

It will be interesting to see Stanley in an RPO offense. He's tough and mobile so he could add the scramble dimension to each play. And there is no denying that his game experience is valuable. This should be a good, healthy competition for the position.

"First-year KU head coach Les Miles indicated he’s in no rush to announce a starting QB, with the Aug. 31 season opener versus Indiana State still nearly five months away." Where is Tom Keegan when you need him. Keegan continually harped on Beaty delaying naming the starter until the beginning of the season. Let's see if Miles takes the same approach to keep all of the QB engaged until game time. Stanley knows well that KU QBs take a lot of hits (hopefully the offensive line will be sound this season), so even if not starting, he could get significant playing time.

Looking back over Stanley's career here, there was always something that got in the way of Beaty figuring out the best way with the depth chart he had was to put in a guy who could pass or run equally and keep defenses off balance, thus giving an inexperienced OLine a chance to succeed and allow us to move the chains. First there was the kid who transferred to Va. Tech. He had a great arm but also a terrible attitude. Then Bender comes along and he had a nice quick release but trembling legs and feet as soon as pressure came. All along there was Stanley just waiting to take over, but as usual David Beaty, a great guy, just could not see the forest for the trees. Don't know who will win this battle, but have confidence it will be the better man.

Andy: complete lie about Keegan. I won’t waste my breat trying to explain football to a numbskull.

Jim: Complete lie about Willis. The kid was warrior. Beaty never wants him because he was a Weis recruit. And his attitude was good enough to humble himself, take a transfer with no guarantee of playing time and lead that team to a bowl game. Don’t trash a kid who was tough as nails for this program.

Jim - Do you have some inside info about player attitudes? I had never read that before. There's plenty of innuendo that gets thrown around here under the guise of fact. Always good to stick with the Dragnet lines - Just the facts. Brett loves to blame Coach Beaty for all that went wrong and with Willis in particular. Pretty sure that Coach didn't tell him to play the pickup BB game where he broke his wrist that kept him out of spring ball after his breakout freshman season. Also pretty certain that there weren't plays designed for him to throw 7 INTs in less than 2 games but others might have better knowledge there also.

Interesting concept of Carter being mobile RPO. It would seem reasonable except for the stats presented here in the middle of last year when the immobile Bender had more ypg or ypc (I forget exactly).