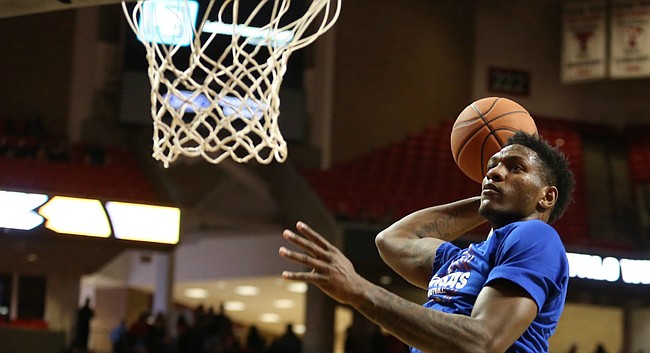 “Come on, Silvio, wake up,” 15th-year Kansas coach Bill Self told De Sousa at one point. “Set the screen and go!”

De Sousa will have more freedom to go, go, go this weekend than at any point of a KU career that started in January.

De Sousa started this season playing high school basketball, for IMG Academy in Florida, and will play in front of 19,000 spectators this afternoon.

With Udoka Azubuike sidelined by a sprained medial collateral ligament for the Big 12 tournament, De Sousa moves from third to second on KU’s depth chart at center.

So it’s not a case of whether he will play, rather, how soon. Best guess: As soon as backup-turned-starter Mitch Lightfoot is whistled for his first foul.

The days of check in, make three quick mistakes, check back out 65 seconds later, are over for De Sousa. Self doesn’t have that luxury now, and the coach thinks that could benefit the talented, yet raw De Sousa, a 6-foot-9, 245-pound native of Luanda, Angola.

Self said he’s not worried about De Sousa trying to do too much.

“I think if you have Dok and you have some other guys, you actually may, fear’s not the right word, but you may have kind of concern that a guy could get in there and disrupt what everybody else is doing,” Self said. "Not now. We need Silvio to be one of our best players. It’s not like, ‘Hey, play to not screw up.’ It’s, ‘You need to play to win.’”

Other than James Sosinski, a walk-on for both the football and basketball teams who has played just six minutes, De Sousa leads the Jayhawks in points (19.2) and rebounds (13.8) per 40 minutes. De Sousa also leads the team with 5.4 turnovers and 10.9 personal fouls per 40 minutes.

Self will let him play through more mistakes in the Big 12 tournament.

“When you know you’re only going to play two to three to four minutes, you’ve got a short leash and everything, your mindset’s a little different than when you say, ‘Hey, we’re going to ride him no matter what.’ And that’s the mindset I think everybody needs to have,” Self said.

For Kansas, this represents a rare opportunity to play the underdog, most memorably portrayed by an anthropomorphic dog in the title role of the canine superhero cartoon series "Underdog." Voiced by late great Wally Cox, the main character was ever the underdog himself, always posing as a nebbish in oh-so-chic Hollywood. "Underdog" ran from 1964-1973, so it might miss the mark as an inspirational pregame video for the KU players. Nonetheless, nobody likes playing an underdog more than athletes in a blue-blood program. The Jayhawks had a little taste of it this season when they weren't the unanimous choice to win the Big 12, just the most common pick.

But thinking of the Jayhawks as underdogs was a stretch until Azubuike hit the floor with a knee injury. Now, it's legitimate. They couldn't beat Oklahoma State twice with a healthy Udoka, so how can they be favored to eliminate the Cowboys without him?

De Sousa has played just 52 minutes, so nobody can say with much certainty how he’ll respond to the more vital role.

“We may find a diamond in the rough this weekend,” Self said. “Who knows?”

The “who knows?” question applies just as easily to the question of when Azubuike will return. He won’t be 100 percent when he does.

Udoka’s situation makes it more important for Kansas to win as many games as possible in the Big 12 tournament, because advancing means more game time against highly motivated opponents for De Sousa. The more experience he attains, the better chance there is that he can develop into a player who can help Kansas this season, even if all nine scholarship players are healthy enough to play.

Devonte’ Graham: Jayhawks preparing to get by without Udoka Azubuike at Big 12 tournament by KUsports.com

A peek inside of KU basketball practice before the start of Big 12 tourney by KUsports.com

Goodluck Silvio. I am hoping KU can drop a big surprise on the Cowboys today. RCJHKU!

Please, please, please Mitch and Silvio NO Meaningless, Lazy, Stupid FOULS. Neither of you can be forced to ride the bench NOW.

The thing is, Kansas is the more talented team and really shouldn’t be considered an underdog. OSU has played lights out against KU this year while KU has played poorly both times they met. If OSU plays average and KU plays to their ability, KU will win, possibly by a large margin. Devonte does not want to be embarrassed again and should be whipping his fellow Jayhawks into beast mode!

KU has been “punked” in both match ups and has lead a total of 30 seconds in both games combined. KU does not match up well with the OSU. They crash the boards and get second and third attempts. Vick has played out of position the entire season. He just is not big enough to bang with the wave of players OSU throws at the boards. Ideally this would have been the game where KU could play two bigs, and move Vick to a backup guard. But Udoka being out eliminates that opportunity. KU has been very, very lucky this season to avoid injuries that prevented a player to play. I am sure Self is painting a positive picture about Udoka as to not give the NCAA selection committee reason to drop KU down a seed or two. I would not be surprised if Udoka is not available when next Thursday/Friday rolls around. Here is hoping that the KU guards shoot the lights out in KC and that Udoka is ready to go next week. Otherwise, OSU could sweep the Jayhawks and KU will not advance to the second weekend in the NCAA, respectively.

Andy, you are hoping and Self is deflecting to "who knows." I'm with both of you.

Self's comments and "hope" for quick return by Udoka, has a wisp of the Billy Preston-ese optimism I heard some times before. I don't expect too much in the NCAA's this year anyway. But, if he's truly not going to be available, give us #6 bracket in the Midwest. Then at least, the fans can easily travel to Wichita and Omaha.

When Vick is in the game it is like playing four against five.

With that said KU can win if the BIG's stay out of foul trouble and Svi and Malik do a lot more then just show up. Need 15 a piece out of them today !

I am not one to predict very often....but I see a blowout today...I see a beat down by our guys....they will bring the Jerod Haase intensity today...they will bring the ultimate warrior mentality and Dok will be on the bench leading the cheers.... encouraging his teammates to be their best... ...its all about your will......this team has lots of IT!........ and it will show today.

This conjures up two memories for me. 1. Perry Ellis as a freshman. Too much thinking all year then blossomed in the Big12 tourney. If I remember right he was on the all tourney team? 2. Bill's predecessor looked a lot like Underdog!!

except Perry played all that season and had been with the team..DeSousa has only been on the roster for a few weeks

DeSousa is both more raw AND more talented.

OSU has certainly had KU's number this year, BUT there is a reason why they have 13 losses and are on the bubble..they could very well easily stink it up today and get blown out by KU by 20