The opening moments of the post-game news conference provided Brianna Osorio with more trepidation than that of her KU women's basketball debut.

As the JUCO transfer walked into the Allen Fieldhouse media room and approached the table alongside teammate Christalah Lyons, she sheepishly smiled. Osorio looked down and then back to a KU athletics official, not quite sure how to proceed.

“Do we speak into the mic?” she asked, gesturing to the table with a laugh after KU's 69-49 win over Emporia State.

It was a good reality check following a game in which the two looked every bit like they had been there before.

Osorio and Lyons made up the starting backcourt on Sunday in the absence of Jessica Washington, who watched the game from the bench. During the pre-game introductions, Washington was overtaken with emotion, at one point beginning to tear up as she stood along the sideline.

Washington underwent surgery to repair a torn ACL earlier in October, which will hold her out from the year. She also missed her first season with the Jayhawks, sitting out due to NCAA rules after transferring in from North Carolina.

“This is important to her. When you suffer an injury, there’s a couple days there that it’s hard to really understand what has happened, why it happened, but then it’s all brought back on a gameday,” said KU coach Brandon Schneider. “You start seeing the fans and smelling the popcorn. You want to be out there with your teammates. I just think it’s a sign that she really cares.” 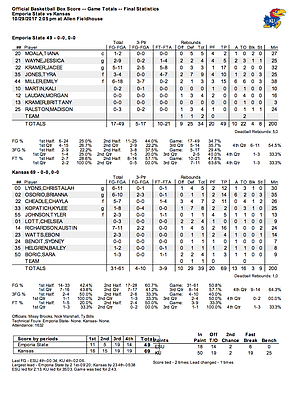 Despite the on-court absence of the 2016-17 Big 12 newcomer of the year, Osorio and Lyons looked sharp. The duo combined for 26 points on 12-for-21 shooting. Osorio tied for a game-high with six assists, while Lyons finished with five rebounds.

The two looked comfortable from the start. Lyons showed off a floater to open the scoring and took multiple charges — “I think she took seven,” approximated ESU coach Jory Collins — while Osorio settled in and at one-point just couldn’t miss.

With 7:34 to play in the first half, Osorio received a pass from Lyons and shot a 3 from just off the right baseline. Her shot kissed off the glass and bounced in. She playfully rolled her eyes as she ran back on defense.

“We’re very fortunate we found her late last spring in the recruiting cycle,” Schneider said. “We couldn’t be happier with her.” 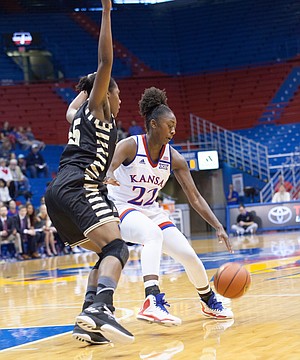 As for the game itself, the teams played close in the first quarter until the Jayhawks used a 13-0 run in the second to push the lead out to 16. From that point on the margin never dipped below 10.

Really, the only reason for Schneider to hold his breath came early in the second half. Junior Kylee Kopatich took a shot to her left eye and instantly put her hands over her face. She ran off the court where a trainer tried to stop the bleeding. The two headed to the locker room, where she received a couple stitches, according to Schneider.

Kopatich would eventually be fine.

While she never got her offense going, shooting just 1 for 8 from the field and 0 for 4 from 3, the sharpshooter chipped in with eight rebounds, a block and a feisty attitude upon returning to the bench in the fourth.

“You know, I played her more just for some game action and some game conditioning,” Schneider said. “Obviously I know what she’s capable of and can do, but I didn’t really want to have to deal with her after the game had I not put her back in.”

So Zenger's boy here will win a few non cons and then get throttled in Big 12 conf play. Nothing to see here.

How is Schneider Zenger's boy?

Btw your name must be visible due to board rules, you f'in troll.