KU's Chayla Cheadle (22) takes the ball to the basket as Pittsburg State's Athena Alvarado (4) defends during the Jayhawks' exhibition victory over the Gorillas on Sunday, Nov. 5, 2017 at Allen Fieldhouse.

The toughest part of the KU women’s basketball team on Sunday may very well have been the look of its best player.

As Kylee Kopatich took the floor in the 57-50 exhibition win against Pittsburg State, she continued to sport a black eye, the remnant of a blow to the head she sustained a week earlier.

“I was a great boxer for Halloween,” Kopatich joked, holding her fists up to mirror a fighting stance. “Lemme tell you.”

But while the bruise had started to fade — “I’m actually kind of sad it’s going away,” Kopatich said — so, too, did the signs of toughness that appeared to emerge from the opener.

The Jayhawks were outrebounded, 39-38, against a smaller Pittsburg State team, something coach Brandon Schneider bemoaned after the game. They were gashed on the offensive boards, where they allowed 15 rebounds and committed 23 turnovers.

“I thought our team played tired and really, really soft,” Schneider said. “I thought they out-hustled us, out-toughed us.” 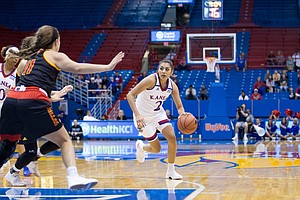 Several of those turnovers came in the second quarter, where the Jayhawks were outscored, 16-10.

The Gorillas started the game playing gap defense. They switched to a situational zone after made baskets in the second quarter and then just entirely to zone as they continued to cause the Jayhawks problems.

In the second period, KU’s starting lineup — Kopatich, Christalah Lyons, Brianna Osorio, Chayla Cheadle and Sara Boric — shot a combined 0 for 9 from the field and bricked five threes. The team combined for seven turnovers in the period and allowed the Gorillas to rebound five of their 11 misses on the other end.

“Yeah, we’re awful against zone,” Schneider said with a laugh. “We’ve got a lot of work to do there. We’re really passive.” 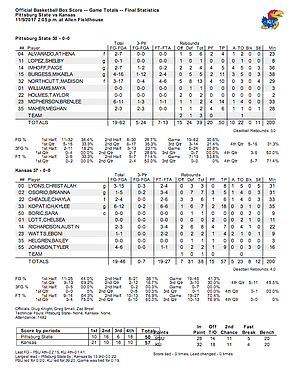 Still, the Jayhawks did enough to get the win, much in part because of the play of Kopatich.

The junior was far more aggressive than in the exhibition opener, knocking down her first four shots and freeing herself up with a variety of pump-fakes to get into the lane.

Kopatich finished the game with 18 points, falling just shy of the first 20-point game of her KU career — albeit unofficially — after missing essentially uncontested layups at the end of both the first and second halves.

“She played great,” said forward Tyler Johnson. “She’s gotten in the habit of leading our team, which is really good.”

At the very least, Kopatich was one of a select few bright spots for the team.

After the game, Schneider said he was happy with the performances by Kopatich, Johnson and Eboni Watts, as well as the team's first-shot defense, holding Pittsburg State to just 30.6 percent shooting from the field and 20.8 percent on 3s.

Those were about it for the positives, though, as the number that invoked the most emphatic reaction from the coach on Sunday came not on the court of Allen Fieldhouse, but on the 56-inch Sony flatscreen hanging in the back of the media room.

“Your team’s winning,” Schneider, a Cowboys fan, was told after the press conference.

As for his other team — the one he coaches — Schneider maintained there was work to do, though one silver lining stuck out.

“Well, I’m glad we played poorly today, and that doesn't take away anything from Pittsburg State,” Schneider said. “But I’d rather play poorly today than when it goes on your record next Sunday.”

Brandon Schneider is not the coach to take WBB to the next level. Im sorry.

Zenger whiffed there. Hutch JuCos coach was perfect and available.

Yes he would have been great right before the NJCAA came sniffing around for violations.

Maybe we could have hired WSU's coach like this board suggested, right before she was fired for mistreatment.

Big 12 leading scorer from a year ago out for the year and two freshmen bigs hurt. Yes by all means this game is clearly the whole season. Joe you are truly an idiot.

I remember the same tone & words from Coach Beaty just before the football season. If the coaches are not happy with the attitude & readiness of the team, then it does not bode well for the team. This hire (Coach Schneider) may also be way above his head at KU as well.

Zenger, what have you done!

Make the team watch Kansas Football replays. It will teach them to be satisfied with mediocrity. Zenger strikes out again.

How pathetic. Schneider's team peaked in the first game and is on the way down already. Another great Zenger hire doing squat. But don't call him Zenger's boy.

From a pansy who won't even show his name. Bonnie you are drunk stop posting.

OK, we all love name calling and accusations but the bottom line is: this team is bad and not getting better under Schneider's guidance. Hopefully, he gets better and the team does as well. We will see.

KU would be way better off with Bonnie back at the helm.