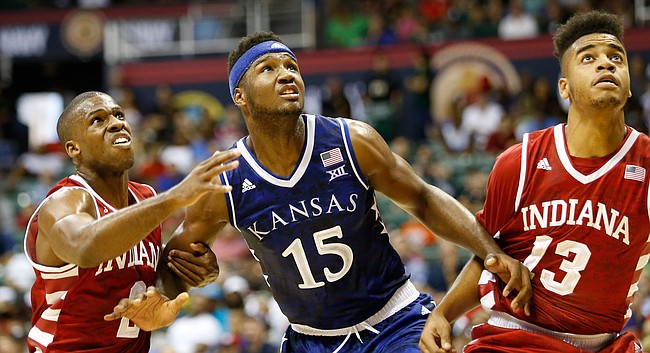 Bragg, who averaged just 5.2 points and 4.1 rebounds while playing in 31 games for the Jayhawks in 2016-17, will have to sit out the coming season as a transfer before becoming eligible to play for the Sun Devils in the 2018-19 season.

The 6-foot-10 forward reportedly considered Cincinnati, Illinois, Xavier and North Carolina State before landing with ASU, in the Pac-12.

I think this is a big mistake for him. The ASU environment is full of way more "distractions" than in Lawrence. I'm on that campus at least three times a week. If he had trouble in Lawrence with the ladies, I don't think he will manage well here.

Damian.. I saw this and thought the same thing I lived in Arizona for quite a while and ASU is one of the biggest party schools in the nation. If he had a rough time at KU chances are he'll have a even rougher one in Tempe. I wish him the best of luck and wish things would have worked out for him at KU.

Once a Jayhawk always a Jayhawk. Good luck to Bragg and I hope to be following his game in the league in a few years.

Am I right that we will actually play against him in 2 years when we play ASU?

Bragg's "distractions" are irrelevant; his "on-court" play was atrocious.

Quite the contrary -- his distractions are what caused his bad play. He was never really focused on basketball this year. His freshman year he was focused and eager to learn. Something changed; and it appeared to be the distractions with the ladies and the partying.

That's a copout. Carlton Bragg is the definition of a soft basketball player. Saying that his off court issues were the root factor in his poor play is not an acceptable excuse, Josh Jackson also had off court issues, and he played great, improved throughout the course of the season. So did a lot of other players.

Carlton Bragg simply is not the player that he was hyped to be coming out of high school, period. No excuse needed.

I think it's a combination of both. He has his head in his rear end and he's soft.

I have to agree, I stated earlier in the season and again at the end of the season, Bragg need to refocus on basketball. At this level you have to concentrate on two things, school and your sport, anything else is going to detract from your ability to perform. Performance inhibiting drugs don't help your play, nor does partying. I'm not saying some great athletes in their sports haven't done exactly what Carlton did, but he failed to first reach greatness.

If during practice when coach is explaining things, your thinking about tonight's party, your not going to become a better basketball player. It wasn't the "distractions" in themselves that was Carlton's downfall, but the lack of focus on the task at hand. The "distractions" the things leading to the two suspensions, were irrelevant, but his lack of focus on basketball is what caused his "on-court" play to be atrocious.

Hopefully, we never wear those uniforms again. Talk about atrocious. And please spare us with Old Glory comments.

What, in the name of Sam Hill, are you talking about?

lol...he must be off his meds

Well here is on former soldier that has respect for our soldiers that give you the right to share comments like this one.

I loved the uniforms that night. Hopefully our team gets continue playing in the special Veteran's Day games.

There's always Canada or Cuba for you to move to.

It's an overreaction to the unis we wore for the military salute game, that is the image for this story.

Given that we have to face Arizona State each of the next two seasons, I have a huge issue with this. >:(

Cmon what big issue and why?

So you're worried about Carlton Bragg beating us? LOL!!! That's cute.

Not him personally, but I am worried that he'll give Bobby Hurley inside information about the team that ASU can use to possibly beat us.

It won't matter we're going to be loaded with talent and one of the best coaches in the nation.

I agree with Creg, it's a different roster with players that Bragg will be unfamiliar with, and secondly, the way that Kansas plays is not exactly a secret in coaching circles. They're on national TV every week, everybody is familiar with how the offense works and they all game plan accordingly. The thing is, they STILL have to stop the Jayhawks from executing, which is a lot easier said than done.

Carlton is obviously looking for consistency, another party school to attend and another game riding the pine in AFH!

Will see him in Lawrence next December and then in Tempe the following year if he is still around. Wish him all the best. I might even make the trek up from Tucson to see him play if he can get his act together. Not too hard to get tickets at ASU.

It's like we traded Carlton for Sam, I'll take that trade any day! And if anybody is worried that Carlton could possibly give Asu any inside info well Asu could be worried that Sam could give Ku the same info about Asu. Personally I think we will crush Asu on pure talent advantage alone. I don't see how this is a good move for Bragg if he was having trouble staying focused at Ku, Asu is the #1 party school in the nation good luck staying focused there. Wish him the best once a jayhawk always a jayhawk!

Where's the competetive side of KU nation here, facing ASU especially with Carlton Bragg? Shouldnt we be looking to beat the hell out of them, regardless who is on their roster? If ASU can beat KU/Self, then KU has bigger problems (in that hypothetical and near-comedic scenario).

Carlton Bragg was somehow rated to be a McDAA-level talent out of high-school, showed some ability as a frosh, especially in the WUG games, and then trended himself downwards. That's on him. Who knows what he did to his academics as well. If a 6'10 McDAA was motivated and wanted to come back strong, Self would have given him the chance. But something caused this decision to become one of transfer out.