Hall of Fame Material: Frank Mason III knew right away that Bill Self was the coach for him

Kansas head coach Bill Self and Kansas guard Frank Mason III (0) pound fists as Mason leaves the game late in the second half on Sunday, March 19, 2017 at BOK Center in Tulsa, Okla.

There have been too many to commit to memory, during good times and bad, so Kansas senior Frank Mason III, could not deliver, in a moment’s notice, his favorite Bill Self story.

But Mason did recall nearly every detail of the first time he met the man who would coach him to greatness during his four seasons at Kansas, and he was delighted to share the encounter with the Journal-World during a recent interview about his head coach.

“It was actually on my visit,” Mason recalled of his first meeting with Self. “We met up at Jefferson’s, that was the first place he wanted to eat at, so that’s where we went. Obviously the tradition and role that played in my recruitment was important, but I just remember thinking the whole time, ‘I want to play for this guy.’” 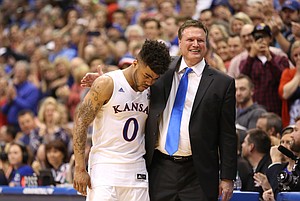 Kansas head coach Bill Self puts his arm around a tearful Kansas guard Frank Mason III (0) as he leaves the court for the final time on Senior Night.

There they sat, over a few plates of wings and baskets of fries, with Self explaining to Mason and his parents all of the wonderful things KU could offer him. No one knew at the time, of course, that one of those things would be nationwide recognition as the college basketball player of the year during his magnificent senior season, but all of the parts of Self that made such an achievement possible for Mason were on display during that initial meal.

“It didn’t really take any time to get comfortable with him,” Mason remembered. “It was a great lunch, a great meeting we had. Coach had a great personality, he was just goofy, laughing around and he just interacted with me and my parents really well.”

With the wings barely digested and his head still spinning from the opportunity at his feet, Mason did not need long to say yes to all that Self had to offer.

“I made my decision a few hours afterward,” Mason remembered with a smile.

Judging by the fact that Mason said on Senior Night that he would sign up to play at Kansas for the next four years if he could — adding, “I swear I would” for emphasis — that decision turned out to be one of the best of Mason’s life.

During the next four years, in which Mason became the sixth leading scorer in KU history, Self and his point guard operated on a similar wavelength during games, in practices, on road trips and in meetings. Neither Self nor Mason likes to spend much time talking about himself, and Mason said that mentality helped the two develop a quick bond.

“It’s great because I’m the same way,” Mason said when asked about Self’s style of constantly deflecting credit elsewhere. “I think about the team first and how we can get better and things like that.” 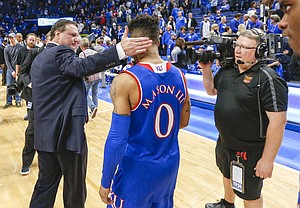 As for the traits, in his eyes, that make Self a Hall of Famer — the KU coach will learn Saturday in Arizona if he is a part of the Naismith Memorial Basketball Hall of Fame’s 2017 class — Mason just as easily could have been talking about himself as well as his coach.

“I think just his passion and how much knowledge he has for the game. He brings it every day to practice,” Mason said. He’s been here almost more than I’ve been alive and we just try to focus in on what he wants every day and what he wants because those adjustments are what make us successful.”

It’s facts like that and stories like the one about that initial meeting that first come to mind when Mason thinks about why Bill Self is worthy of inclusion in the Hall of Fame.

Mason stresses that Self’s knowledge of the game is off the charts and that his passion for coaching, developing players and inspiring greatness are nearly unmatched in the college game.

But it’s those things along with the human side of Bill Self that make him a Hall of Famer, according to Mason.

“He does a good job of preparing us every day, on and off the court, and that’s so key to our lives,” Mason said. “I think Coach Self deserves it. Just look at the numbers and the history he’s been a part of here, and even before here. It’s just unbelievable what he’s been able to do.”

Of all the players to come through Kansas.......... Frank will be one of the hardest to see leave. Such a great representative of our school and our program. Always left it all on the court. Willed our team to wins we had no business securing. Never heard his name in the press in a negative way and always knew that he was representing our program 24/7. So many good things about this young man I could go on all day long. He was a leader unlike any other point guard we've seen in my time as a Jayhawk fan. I will really miss seeing number 0 on the floor and I hope he goes on to have a successful career in ball or whatever he does in life!

I too will miss Frank, a GREAT student athlete. Very proud of him and what he has accomplished.

He gave it his all and that is what I will remember about him in his last game.

It might partially come from Coach Self and Mason both playing the same position in college but what I saw was a true Coach/Mentor/Friend relationship that started in Mason's first year at Kansas. I can't count how many times where it seemed to be that Coach Self and Mason were the first to hug and congratulate each other after a win.

Coach Self has always seemed to me to be the type of coach that truly cares about the success of his players but other than his son, I don't think I've ever seen him happier or more invested in any other player more than Mason. I don't want to use the 2nd or substitute father/son relationship that so many writers seem to want to create but I actually think it's every bit as close.

There have been players over the years that seem to stand out to me as personal favorites. Not necessarily because of on-court success or maybe I should say statistical success and Mason is right at the top of that list of favorite players that I have nothing but good hopes for their future.

I've always been particularly hard on point guards. But there is not one single thing I can say bad about Frank. He always gave 100% every game. He never was in trouble. His parents should be very proud as they raised an outstanding young man. Coach Self should be proud as well as he helped Frank be the best player in the nation. Good luck in the future Frank. You will be great at whatever you choose to do!!