Purdue forward Caleb Swanigan (50) celebrates with forward Vincent Edwards (12) after scoring a basket as Northwestern center Dererk Pardon reacts as he walks to the bench during the second half of an NCAA college basketball game, Sunday, March 5, 2017, in Evanston, Ill. Purdue won 69-65.

An opponent of each team during the 2016-17 season, Nebraska basketball coach Tim Miles on Monday broke down top-seeded Kansas’ upcoming match-up with fourth-seeded Purdue, set for approximately 8:39 p.m. Thursday in the Sweet 16 in Kansas City, Mo.

“It’s an interesting match up because this Purdue team reminds me of some of the older Kansas teams when they were so physically imposing inside,” Miles told the Journal-World.

Miles, whose Huskers lost, 89-72, on Dec. 10 in Lawrence and defeated Purdue, 83-80, Jan. 29 in Lincoln, Neb., said it was such an intriguing match-up that he was thinking about making the drive down. 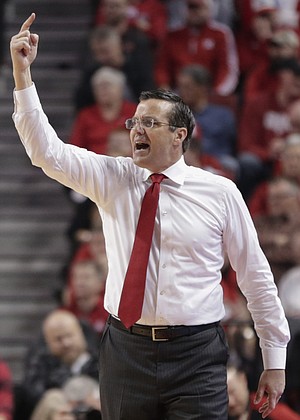 Nebraska coach Tim Miles calls instructions during the first half of an NCAA college basketball game against Creighton in Lincoln, Neb., Wednesday, Dec. 7, 2016.

While most of the focus in the days leading up to Thursday’s Sweet 16 clash figures to focus on how the Jayhawks (30-4) will handle Purdue big men Caleb Swanigan (6-foot-9, 250 pounds) and Isaac Haas (7-2, 290), Miles said guard play should not be overlooked.

Not only do the Jayhawks feature three of the best guards in the country in Frank Mason III, Josh Jackson and Devonte’ Graham, but Purdue (27-7) also has a talented backcourt that shoots the heck out of the ball — the team’s 40 percent 3-point shooting led the Big Ten — and complements the Purdue big men perfectly.

“Swanigan is a legimate NBA power forward,” Miles said. “He really is a special player. And they’re a tough out. Their guards are really smart guards. They’re not as prolific as the Kansas guards, but they’re really smart, they take good shots, they put the ball where it needs to go, they make the extra pass. They’re a well-put-together team.”

As with any game, match-ups will be a huge factor in this one, and Miles said he was looking forward to finding out how each coach approached the chess match.

“The lineup that will be interesting is when Purdue plays Haas and Swanigan against Jackson and (Landen) Lucas,” Miles said. “Something’s gotta give. If Josh plays anywhere close to what he did against Michigan State, holy cow. He was terrific. But it’ll also be a different challenge for Josh than (MSU forward) Miles Bridges was. Swanigan’s physicality is far greater than Miles’. It’s guarding a totally different dude.”

To that end, Miles said one thing that might work in KU’s favor is that Purdue’s best moments throughout the season seemed to come with Haas on the bench.

When that’s the case, 6-8, 225-pound junior Vincent Edwards plays the four and, according to Miles, that pairing is a much more natural match-up for both teams, with Edwards guarding the 6-8, 207-pound Jackson and vice versa.

Miles said Nebraska’s strategy to slow down Swanigan, who, along with Mason has been in the running for several national player of the year honors, was simple.

“We had to double the crap out of him and just make a mess of everything inside,” Miles said. “And we did a good job of it. We also made some shots, which helped us.”

The Cornhuskers also made Purdue’s double-double machine (Swanigan enters Thursday with 28 double-doubles in 34 games) work for his 14 points and 14 rebounds. He finished 5-of-15 shooting and also added six assists and four turnovers in 34 minutes .

When Nebraska came to Allen Fieldhouse, Miles had the challenge of game-planning for something the Boilermakers will not have to — 7-foot KU freshman Udoka Azubuike, who scored seven points and grabbed six rebounds in 16 minutes against Nebraska, his second to last game of the season.

Azubuike’s absence, Miles said, is a blow to the Jayhawks, who, as they have done all season, again will be tasked with creating an advantage from their four-guard lineup.

“You gotta score a lot of points to beat those guys. And there’s no doubt that Purdue can score, but they will control the ball, control the tempo much more than that, and they will work from the inside out like some of Bill’s earlier teams.”

After going over the scouting report for Purdue on Monday, the Jayhawks will get back on the practice court Tuesday and will host an open practice at Sprint Center — free of charge to the public — from 3:10-4:00 p.m. on Wednesday.

6-foot-9, 250 and 7-2, 290 is a whole bunch of beef, and Vincent Edwards 6-8, 225 isn't small, but that's essentially all they have. They do have 6-foot-10, 240 and 7-2, 230, but those subs basically don't, so in someways they are actually "thin" in the front court. I don't like the thought of Bragg defending either Haas or Biggie, but I think that Dwight can hold his own against Haas - in spite of the size differential, and Landen is smart enough to keep Caleb from taking over the game.

In the back court, it is much like MSU. Purdue just does not have the athletes to hang with any of the 5 Guards. Against anyone else, V Edwards would do well, but Josh is going into a zone. He's earning a #1 pick in the next couple weeks.

I can see Mathias defending Graham, and limiting his points, so it will be important for him to find other ways to contribute, and for Svi/Vick to step up to support Frank & Josh.

The emergence of Dwight means that we match up really well now. 10+ in the end.

I agree with most of your assessment Dirk, especially about Josh getting the # 1 pick and possibly 10+.

I don't think anyone can guard the 'hawks with Frank and Josh playing at the same level or higher then they did in Tulsa. Graham will only be limited by him missing shots not Mathias, imo.

10+ sounds about right unless somehow Glenn Robinson comes running out of the tunnel.

I agree with Coach Miles that something has to give in this match up... They have a size advantage on paper, but games aren't played on paper and for all the talk about our front line having to defend theirs, I haven't seen much before this article addressing the fact that Purdue has to guard us as well.

Watching ISU and Burton blow past Swanigan for easy baskets during their comeback attempt on Saturday has me thinking that Painter won't put Biggie on an athletic Josh for fear of a similar result. That means you have to put Biggie on Landen, and Edwards or someone else on Josh, and we immediately have a size advantage down low, which Self will try to exploit for easy baskets and fouls. So while it's great they have a 7 footer, it would surprise me to see him on the floor at the same time as Biggie given the matchup issues that presents when we pull him away from the basket. Additionally, Biggie didn't get his nickname ironically, he's a large lumbering guy in the traditional B1G mold. I think we have the opportunity to run him into the ground if we make this an up tempo game.

Definitely will be interesting to see how this all plays out. Thursday night can't get here soon enough.

this is going to be epic. I think Colby will be getting a lot of minutes as we, as a team, deal with Swanigan. What a beast he was in that Iowa State game. Those were two grown men battling (him and Burton). Bottom line, if we are hitting our 3's, we should move on. Svi seems to be getting his stroke back.

Completely agree but Iowa State kept it close without any bigs and like you said, Svi (and Graham) seem to have completely recovered from their pretournament slump. If we hit our threes, we will be playing Saturday

A key will be to try to speed up the game and keep Purdue from running half-court sets. If the game is slow and the big men are allowed to work the box, that puts KU in a difficult position given limited bodies and fouls. Transition and full court press are KU's opportunities. Looking forward to a great game.

Take the Buddy Heild approach. Let Swanigan go of for 30-40, every one else scores 7 and we win 80 soomething to 70 something. tell Landen to be soft in the first half,, try and save 4 fouls for the second half. Throw a hard cast and a pillow on Azabuke and let him get in there and bang on defense for a few minutes/fouls

Mason will still stare down all those guys!

Apparently that was a quote from Frank when Coach challenged him to guard Evens in the OSU game in Gallagher-Iba. Something to the effect . . . put me in the NBA and I'll guard LaBron right now . . . Great response from Frank. And what a great way for Devonté to respond to that question.

Thanks for filling in Part 1. I hadn't heard that one. Really love this team's affection for one another. Different personalities all coming together.

I can't wait. I'm sure that KU is going to try to stick to the small ball lineup and dictate the pace by pressuring Purdue's ball handlers. It will be interesting to see if Purdue is forced to go small to match up, or if KU will try to big up a little bit with Coleby. I think that both teams will have to deviate from script at times, but I think that this game will come down to Purdue's perimeter play. Biggie will get his, but if they are going to win they will need some outside help.

If Purdue plays Caleb and Isaac together, imo, Bill would double team Caleb with Josh and we would force them to shoot 3's (hopefully with a hand in the face), and if they miss we are off to the races and that equals lobs, dunks, and threes.

I think Purdue will be forced to play small and you make a great point about Purdue's perimeter play.

Let's not forget that Svi and Josh are both 6-8, Bragg could surprise, and Mitch hasn't played much since Bragg's return, but he's always available if we need some foul trouble relief.

Looking at Isaac Haas' last few games, it looks like he will likely play mostly while Swanigan sits, which won't be often. It doesn't really change the gameplan when he comes in. Lucas and Coleby will have to try to keep him from getting easy baskets. Jackson won't really be doing anything that he hasn't already been doing since Udoka went down. So, he and Svi can switch it up on Edwards and Cline.

We went up against Baylor's bigs and beat them twice. I think that the master, Bill Self, will devise multiple defensive schemes to try to throw Purdue off their game.

If KU shoots a decent percentage and can speed the game up a little, then KU should win.

I was thinking the same thing. We've never really had difficulty playing against size. It's our intensity on defense that has been our biggest problem (and free throws).

Purdue was the best team in the Big 14 this year. 27-7 overall, 14-4 in the Big 14. They beat the Spartans twice by double digits. However, they lost to Michigan twice late in the year, at Ann Arbor and at the B14 Tournament held in Wash DC.

You have to make Caleb play Defense! He is so versatile on Offense, he can post up or come out and shoot the 3! Caleb is a match up nightmare, would love to get him in early foul trouble. Hard to believe , Caleb was 6'2" and 400 pounds in the 8th Grade.