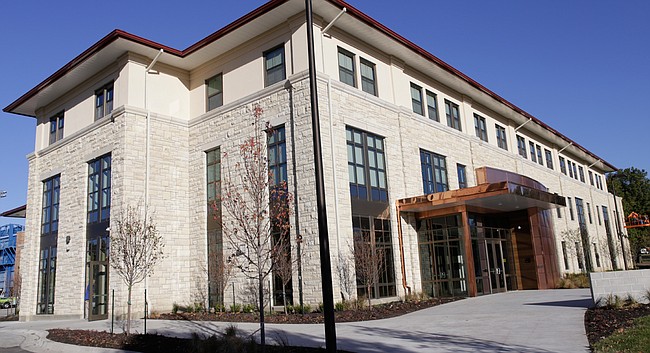 University of Kansas officials, citing federal law, are standing by the decision to delay publicly releasing a police log entry for a rape reported in December at the apartment building where the men’s basketball team lives.

Most incidents are added to KU’s daily crime log a day or two after they are reported; the rape was added to the log more than a week after it was reported to police. A Journal-World reporter searching past months of log activity discovered it and published an article about the incident on Tuesday.

The case remained under investigation Wednesday, and no arrests had been made, police said. Police have not released any information regarding a suspect.

Deputy Chief James Anguiano of KU police said the decision to not immediately enter the McCarthy Hall incident on the university’s online crime log did not involve favoritism for athletes or a desire to shield from the public the fact that the KU men’s basketball dorm was the site of an alleged sexual assault. Five male basketball players are named as witnesses in the rape report.

“We’re here to do a job and get the facts of the case, and sometimes some cases take longer than others,” Anguiano said. “Anytime we get a call, we take each call seriously. It doesn’t matter if it’s high-profile.”

● Jan. 25 — Self comments on reported rape at apartment building where basketball team lives

● Jan. 26 — Self says he’s been given ‘zero information’ to warrant player discipline in connection with rape investigation

Had the incident been made public at the time, it likely would have received extensive media coverage both regionally and nationally due to the fact the KU basketball team lives at the facility, and due to the number of allegations nationally involving student-athletes and sexual assault cases.

KU officials are required to follow certain reporting procedures as part of a federal campus safety law. The federal Jeanne Clery Disclosure of Campus Security Policy and Campus Crime Statistics Act requires university police departments to maintain a written daily crime log, with incidents added within two business days of being reported to police — but there are exceptions to that rule.

According to the law, institutions can withhold information from the log if it would jeopardize an ongoing criminal investigation or the safety of an individual, cause a suspect to flee or evade detection, or result in the destruction of evidence.

At whatever point the “adverse effect” of concern is no longer likely to occur, the institution is required to then add the incident to the crime log, according to the Clery Act.

Anguiano said since the McCarthy Hall rape report is still under investigation, he could not specify exactly why that particular case was temporarily withheld from the crime log.

However, he reiterated the exceptions outlined in the Clery Act.

“There’s a handful of different reasons that Clery allows you to do that, and it’s done on a case-by-case basis,” he said.

Anguiano said the McCarthy Hall case also did not meet the criteria to warrant an immediate campus alert.

“We take the information at hand, and we see if there’s an immediate threat or a continuing threat to the community,” he said.

A 16-year-old girl was reportedly raped between 10 p.m. Dec. 17 and 5 a.m. Dec. 18 at McCarthy Hall, 1741 Naismith Drive, according to the publicly available portion of the police report, requested and obtained Tuesday by the Journal-World. In addition to rape, the suspect also is accused of contributing to a child’s misconduct, furnishing alcohol to a minor and possession of drug paraphernalia, according to the report.

Police have said the 16-year-old, who was not a KU student and not from this area, was visiting residents in the building. The police report indicated the suspect was known to the girl and that the suspect was believed to have been using alcohol and drugs.

A runaway juvenile also was reported at McCarthy Hall the morning of Dec. 18. Police would not confirm whether the runaway and the reported rape victim are the same person.

McCarthy Hall is an all-male on-campus apartment building operated by KU Student Housing. McCarthy is home to about 40 students; roughly half are KU men’s basketball players, and the other half are upperclassmen, nontraditional or transfer students.

KU Athletics is cooperating with the investigation, Anguiano said. Five male basketball players are named as witnesses in the rape report, and a sixth player is named as a witness in the runaway report.

Anguiano noted that being listed as a witness doesn’t necessarily mean someone saw a crime. Witnesses also might include people who overheard something days after a crime, were in the area at the time or saw something that might be related, Anguiano said.

Police also interviewed the same two 19-year-old women in both the rape and the runaway cases, according to the police reports.

Anguiano said Wednesday that the rape reported at McCarthy Hall was added to the crime log on Dec. 27.

The log entry was dated Dec. 17 and placed chronologically with other incidents reported and posted around that date. The log entry only indicates the crime was reported Dec. 17; it does not include the date police added it to the publicly visible log.

Alison Kiss is executive director of the Clery Center, a nonprofit organization with the mission of creating safer college campuses. The Clery Center was founded in 1987 by Connie and Howard Clery following the April 1986 rape and murder of their 19-year-old daughter, Jeanne, in her Lehigh University dorm room in Pennsylvania.

Kiss said universities can withhold incidents from their crime logs up to 60 days but that, again, there must be a reason for doing so.

She said there’s no firm norm for posting sexual assault reports to crime logs compared with other incident reports.

“It varies,” Kiss said. “I think it’s important that campuses evaluate on a case-by-case basis.”

As for the format of daily crime logs required by the Clery Act, there’s flexibility for that, too, Kiss said.

The law does not require logs to be online, she said, but it does require schools to make the crime log for the most recent 60-day period open to public inspection during normal business hours. Schools must provide older portions of the log upon request, within two business days.

Log entries are posted in chronological order based on the date incidents were reported to police. The online log goes back six months and is searchable by crime type.

The Journal-World regularly checks the online log and publishes listed incidents in a KU Crime Blotter feature weekly when classes are in session, and usually every two weeks during breaks.

The vast majority of crimes at KU are nonviolent — theft, vandalism and drug possession are common — and posted in a business day or two after being reported. Some in recent months have been posted later, including a sexual battery reported at Oliver Hall in late October, which was posted several days but less than a week later.

Occasionally, the Journal-World searches past months for serious crimes that are not posted shortly after being reported. Members of the public can sign up for email alerts from CrimeReports.com, though such emails only include a tally and general categories of crimes newly added to the log, with no corresponding details.

The Clery Act also requires schools to publish an annual tally of sex crimes reported on or near their campuses. Those reports are released each fall and include only tallies of crimes — with no narratives or specific locations — for the previous calendar year. According to KU's most recent Clery report, there were 13 rapes reported at KU in 2015, with five of those in campus housing.