A good sign: Landen Lucas to work on offense with Wayne Simien

Rugged Landen Lucas, who led Kansas University’s 33-5 basketball team in rebounding during his breakout junior season, plans to improve his “offensive game” the next few months.

“There’s working on it, and there’s really learning from people who know what they are doing. So this summer I’m getting with Wayne Simien as much as possible,” the 6-foot-10, 240-pound Lucas said of the 6-foot-9, 250-pound former All-American, who lives in Lawrence and is the team’s chaplain.

“If there’s someone who knows how to score on the block, it would be him,” Lucas added of Simien, the 14th-leading scorer in Jayhawk history. “I’m trying to meet up with him, get some tips from him — workout tips, advice. If he ever is in the gym with me, (we’ll) work on some stuff.”

Lucas, who averaged 5.8 points a game off 64.3 percent shooting and 6.8 boards as a fourth-year junior, has other offseason goals as well. 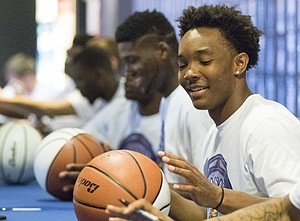 Kansas junior Devonte' Graham flashes a smile as he autographs a basketball during Bill Self Basketball Camp check-in on Sunday afternoon at Allen Fieldhouse.

“On top of that, improve on rebounding and defense. You can never rebound too much,” the Portland, Ore., native said.

He was speaking Sunday in KU’s Booth Family Hall of Athletics after signing autographs for two hours at Bill Self’s summer basketball camp for youths. He has been back in Lawrence just two days after spending about a month in Portland.

“A few more (people) know my name now, know more about me. That’s fun,” Lucas said of his popularity back home and in Lawrence, which has grown after his starting 19 games a year ago for KU’s Big 12 regular-season and postseason tourney title team that reached the NCAA Tournament Elite Eight.

“I mean, you come here to be part of something big. I think last year I was able to contribute a little bit more to that. I’m happy I’m here and doing it at a place like Kansas.”

He’s ready to do what he can to make the team’s newcomers feel comfortable. Freshmen big men Udoka Azubuike and Mitch Lightfood and Liberty transfer Evan Maxwell are already on campus for the start of summer school, while guard Josh Jackson is slated to arrive today.

“Just to take it all in,” Lucas said of advice he’ll give the rookies. “Everything is going to come at them real fast. To enjoy the process … these workouts now will seem very big and important, each one. They are, but really they just need to come in and take it slowly. Nothing is being decided right now by these workouts. Work on getting better and enjoying everything.”

Of Jackson, who is Rivals.com’s No. 1 high school prospect in the Class of 2016, Lucas said: “He’s a very nice kid. I got a chance to keep in contact with him through the recruiting process. He’s a cool guy. I’m looking forward to getting a chance to see him play in person. I haven’t done that yet.”

Andrew Wiggins, who has completed two seasons with Minnesota’s Timberwolves, was KU’s last top-rated high school player to compete for the Jayhawks.

“Andrew did a great job. He just focused on himself. He didn’t pay too much attention to what others were giving him as far as the hype,” Lucas said. “He (Jackson) could definitely learn from that. The attention I think is great for the whole team, great for the program. We’ll feed off that even more. We’re already going to be getting a ton. Having him here will be fun. I’m looking forward to playing with him as well.” 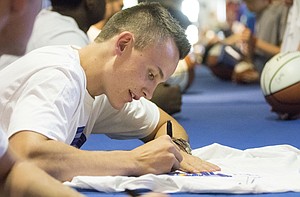 Senior leader Lucas, who was sporting a beard Sunday — “I don’t know if it’s staying; we’ll see if it actually will grow in full,” he said — said he reported to camp healthy. Two years ago, he had surgery to remove a noncancerous bone tumor from his leg.

“I actually feel good,” he said. “At the end of this year (2015-16 season), I probably felt better than I have in a long time. Surprisingly, I probably could have played another half season and felt good doing it. I’m definitely happy about that. It’s a credit to our staff and (strength coach Andrea) Hudy for keeping our bodies in good health and shape. I’m happy about that because last year was the exact opposite.”

Academics report: Lucas took part in graduation ceremonies a few weeks ago, receiving his business degree. “I just finished my classes in May. Now I’m focusing on graduate classes,” he said. “The online class (he’s taking this summer) doesn’t cover all our hours next year. Tyler (Self, senior) and I are in it together. We’ll take some class on the side along with that.”

Many contact Newman: KU is one of several schools to contact Mississippi State to speak with Malik Newman about a possible transfer, the Clarion-Ledger reports. Others: Arizona, North Carolina State, Purdue, Georgia Tech, Arizona State, Miami, TCU, Oregon and Iowa State. Newman averaged 11.3 points a game during his freshman year. He suffered from turf toe and back spasms.

It could help, Wayne didn't have "hops" either, but was a force down low. I do love Landen's work ethic.

Forgot, glad to see a student athlete, congratulations on earning your degree. RCJH

The article is about Lucas, but the headline picture is Azubuike. I think we have a copy editor problem.

In reality, there wasn't much wrong with Landen's low post offensive game last season, other than the fact he was facing heavy competition for possession of the ball. His footwork and moves off the block were usually excellent and he was very good at using his body to shield the defender. What he does not do well is stretch the floor, and I hope he works on developing confidence in his mid range jump shot and dribble moves to the basket.

I don't think one should anticipate Lucas making "dribble moves to the basket". That is not his game nor will it ever be. On the other hand. if he could develop some consistency from10 to 12 feet it would certainly help offensively. He is a back to the basket 5. He needs to develop a jump hook, a shot he attempted some last year but with little success. He had about 5 foot range last year and I don't believe that will be expanded significantly this coming season. He will score by sealing off defenders and getting some drop off lay ups, dunks and put backs. His role is to be a physical post defender, strong rebounder and facilitator e.g.set strong screens and some pick and roll to the basket for the return pass. If he can average 8 to 9 points, 10 boards and 2 to 3 blocks a game, this type of production from him shouldn't disappoint any KU basketball fan.

Disagree. He is not a clod. One or two dribbles the basket would do it. He is capable of one step and go and/or being fouled on the way to the basket. That is contingent, of course, on developing his perimeter shot.

Didn't say he was a clod, but I know he will not be expected to get his own shot. He is a bright kid and he knows how he helps the team and putting the ball on the floor and creating for himself will not be part of the equation. We will have plenty of guys who can get their own shot and he is not one of them. If his defender sags off of him and clogs the middle or helps on Bragg or Jackson it would be helpful if he could hit the occasional 10 to 12 footer. He won't be asked to do what you think he needs to work on.Let's count the number of times next season he puts the ball on the floor and beats his man off the bounce. Other players will be asked to get him the ball where he can be most effective in finishing.

F off with the spam about this garbage website and garbage 2 month old article.

Lucas is good at securing position but sometimes has a difficult time finishing. He has missed more bunnies than Elmer Fudd.

Not to quibble on the point but Elmer Fudd only ever missed one bunny, two at the most (Bugs Bunny and occasionally the hot and unnamed female bunny which appeared rarely in episodes).

Best of luck and success in the upcoming season Landon and congratulations on getting your business degree.

If you miss one bunny multiple times, does that qualify as missing a lot of bunnies? Where does everyone else stand on this burning Elmer Fudd controversy?

I thought is was a funny and appropriate analogy.

its amazing what a year makes.....Lucas wasnt even an after though coming into last season.....he was roasted on a regular basis on his playing ability ....and some felt he should have never seen the floor....Patience ,hard work, positive attitude and the trust and belief from the 4 starters who felt he gave us THE BEST CHANCE TO WIN.....got us feeling good about him going into next season.........and he may have just scratched the surface......keep on working Lucas ......

Thanks again, Mick, for the great education in the Allen family philosophy. I totally agree with your assessment of Landen, who is one of the best role models that KU has ever had.

Landen was at his best from about game 4 on. It was about game 3 that they tried running some offense for him early in the game only to pull an Elmer Fudd. Fortunately, he, Coach Self, and the rest of the team learned quickly to stick with what Landen does do well. Block out, rebound, ... If he can learn half of Wayne's turnaround his offensive game will have increased at least a 100-fold. There will rarely ever be much of a need for him to flex his creative O muscles. There's already plenty of that on the team.