Keith Langford, who has a degree in journalism from Kansas University, crafted one creative sentence when asked to describe Bill Self’s basketball Boot Camp.

“It’s almost like being in a torture device from Jigsaw from one of the ‘Saw’ movies,” Langford said in an e-mail to the Journal-World from Kazan, Russia, where he plays for BC Unics.

“I haven’t had to give birth, so there’s that,” 6-foot-4 shooting guard Langford added jokingly, comparing Boot Camp with other physical tests he has endured in his life. “Seriously, it’s right up there.”

Langford, 30, who played at KU from 2002-05, participated in Self’s first two Boot Camps at KU after experiencing conditioning Roy Williams-style his first two seasons as a collegian.

Boot Camp, which for KU’s current players starts at 6 a.m. today in Allen Fieldhouse and runs for two weeks, consists of an hour’s worth of sprints, backboard touches, defensive drills and slides — all without use of a basketball.

“The thing I remember most is not knowing what you are about to go through,” Langford said of his first Boot Camp. “My first two years with Roy there was a timed schedule and you knew exactly what you were up against (in participating in a 12-minute run the first day of school and every ensuing day until passing a certain standard) and when you had to be ready for it.

“It would be tough physically, but mentally you could keep a cushion. With Boot Camp, anything goes,” Langford added. 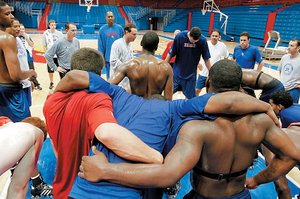 Perhaps the toughest thing about Self’s Boot Camp is the time of day. College students, the saying goes, are sometimes more comfortable going to sleep around 5 a.m. than awakening at that time.

“After getting up at 5 a.m. for two weeks straight, I had and have a different appreciation for the early-risers of the world,” Langford said. “Those wake-ups were painful. There are a couple other memories that stick out, but those are for us guys when we hang out and meet back up in Lawrence during the summers.”

“Maybe a little bit,” junior forward Hunter Mickelson said, asked if he is dreading the opening of Boot Camp.

“Just because of the mental aspect of it, getting ready for it in your own head. After you get done with the first day, waking up at 5:30, 5 o’clock to get here at 6, I think after we get that done, we’ll be fine. After the first day, it’ll be fine. We’ll just have to grind and get through it.”

Junior Perry Ellis said the most challenging part of Boot Camp is, “just being tired. You have to make sure you go to class right after, even though you are so tired. I would say it’s the hardest thing we do. It’s pretty intense.”

Former KU guard Tyrel Reed, who was cited as a Boot Camp star by Self during his four-year career, agreed.

“The most difficult part for me was the long days it caused,” Reed said. “Being up at 5:15, then working out for an hour or so, then doing player individuals, weights, pick-up, and then studies at night. Next thing you know, you’re going to bed to get up and do it again tomorrow. I always tried to tell myself that I could run forever, and it was just getting the right mind-set before going into the gym each morning.”

Now in his 12th year at Kansas, Self has held Boot Camp at all his stops, including Oral Roberts, Tulsa and Illinois.

“Same as always, get our guys in the best condition as possible,” Self said. “Get them to be a little more responsible, tougher and rely on each other, become a closer team.

“You accomplish some toughness things together, some things we draw from every year in February, March. It gives us an air of toughness we can get through things, and it’s a great method of teaching defensive slides and things like that.”

Ellis, for one, has decided to not scare the freshmen.

Players do have a chance to catch their collective breaths Saturday and Sunday before gathering again for the final week.

“When you initially hear that it’s only two weeks and not on the weekend, we may have all gotten a false sense of security,” Langford said. “With Roy, conditioning and preparation was just ongoing through out the preseason. It sometime felt like it wouldn’t end. Little did we know ... ”

Players will tell you the best thing about Boot Camp is when it does end — for good.

“It’s one of the best college days I’ve had, honestly, knowing I’d never have to do that again,” said New York Knicks center Cole Aldrich, whose last Boot Camp came his junior year in the 2009-10 preseason. “I walked out of that locker room, and I’m seeing these guys are passed out, dead tired, it’s 7 o’clock in the morning. They’re laying around, and I’m up, shirt off, running around the locker room saying, ‘I don’t have to do this (bleep) any more.’ I was so happy ... so happy.”

Those type of stories can be told and retold at team gatherings in the future.

“The funniest memory I have is coach (Danny) Manning throwing my shoes away one night and not having my orthotics or shoes I liked to run in there for me the next morning,” Reed said. “I am notorious for having the sweatiest feet and ruining a pair of basketball shoes every couple weeks. Coach had been telling us to put our shoes and clothes in our lockers at night to help keep the locker room clean, or they were going to start throwing our stuff in the trash.

“I always left my shoes out of the locker to let them air-dry overnight. Anyway, I came into Boot Camp the next morning and had no shoes or orthotics to run in. I had to improvise and wear a brand-new pair of shoes that morning, which killed my feet. After Boot Camp, I went out in the industrial-sized trash bin with one of the managers and found my shoes and orthotics. All was good again in my world, and coach Manning apologized for the miscommunication.”

Let the new memories commence starting today in the fieldhouse.

Damn I am tired and I have not been in boot camp.. I guess age can do that also. I can't hardly wait until BB season starts..

Guys who are 18-23 years old can endure a lot of physical and mental challenges. It's not that tough for them.

Interesting that Aldrich knew he wasn't coming back as early as September.

This is very interesting, considering that despite everything that we knew about Cole, we still had to read a million and one interviews of him stating that he was just focused on this season, and we had to read all of the comments and speculation about why he should leave or why he should stay just like we do for everyone who has NBA prospects.

He could have left after his sophomore year and been a top 10 pick. Despite all of the "will he stay or will he go" drama during and after the season, the decision was already made before Self even rolled out the basketballs for Late Night. We had read about his dad's job getting cut and about their financial struggle while he was in school at KU.

It was well known that the only reason Cole came back was because Sherron did. Had Sherron left after his junior year, Cole following him to the NBA.

True Cameron. but a lot of times, the coaches and players know the intentions of their team mates!

we always feel like these guys are making this really tough decision by talking with their families and coaches for several weeks after the NCAA tourney and then delivering an emotional speech at a press conference to say their "goodbyes".

Now we know that probably for 90% of the players who come to KU with pro prospects Self probably has a pretty good idea what the criteria are for their staying or leaving even before the season starts.

It's good to know that there's less of a seat of the pants decision making process for many of these guys that what is presented in the media.

Self almost always knows who's going and who's staying a year in advance. Remember a couple of years ago when in the middle of the season, Self said something about KU possibly bringing in 7-8 new players when only 3-4 were predicted to at the time. 2011 when the Morris twins declared is the only year I can remember being legitimately caught by surprise with players declaring early and not already having recruits in the mix to replace them.

we just don't get that insider information!

And that's how Tyrel Reed suffered a stress fracture in his foot. Thanks, Danny.

That's what I was thinking!

Maybe boot camp is when and why Cole decided to leave after his junior year!

Some of my favorite memories were the Ted Owens/Sam Miranda versions of Boot Camp, including running up and jogging down the Campanile. A few years later, watching Ranger training, I'd laugh at the thought those days were so tough for the guys. Ranger training covers two months, every day (www.rangerschoolprep.com/fy-2014-rang...). I suppose there is a slight difference getting in shape to play BBall vs. a life & death situation. But then again, how well a lot of these guys perform is a life altering situation, so they better take it for all they can get.

Who was the walk-on who threw up so often in boot camp they put his photo on the trash cans? I remember someone here on the boards saying that would give all the other players a Pavlovian response to puke every time they saw him.

Boot Camp under way for Kansas by Gary Bedore LJWorld.com
0

Maybe its just me, but i don't really care for the boot camp of Death! i mean, in the grand scheme of things, has the boot camp really been that beneficial?

even if Self were to completely skip the boot camp, we'd still be favorites to win the Big 12.

who knows- maybe if Embiid didn't participate in the boot camp, he may have been more healthy. not saying there's a direct correlation, but it always like at some point mid season, players are tired and need to be given time off. so why overwork them to death? we haven't had a championship since 2008. Self can take a gamble. worst case, we win the big 12 like every year.

They have plenty of time to recover between the end of boot camp and the start of practice. I don't think there is any correlation between boot camp and any mid season wear and tear (unless there is an injury that happens in boot camp and nags the player throughout the season).

I think boot camp is as much about mental preparation as it is physical. If you can't make it through this, you aren't going to be able to handle playing at KU, or don't want it bad enough to play at KU. As has been said in these articles, it's also a team building exercise to build bonds between teammates.