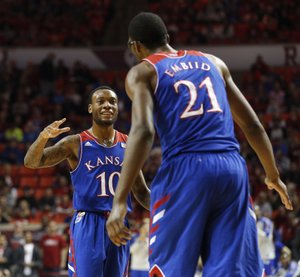 Self's remark to the T question is what makes him so great as a coach. He's able to emphasize what he needs to emphasize, still add just enough lightheartedness (for the situation) to make it all palatable.

Clark's cross-over looks really good. I'm amazed with how Tharpe shot today. He needs to shoot more. The last minute was completely controlled by him.

No, he needs to continue taking good shots when they are available and running the offense to set teammates up for good shots.

No one player should ever expect to do the majority of scoring for more than a few minutes at a time, with so many capable of doing it the next few minutes. Check out the spelling of "team."

5 out of 7. What "No" are you referring to? 3 assists for the night? OK, he needs to get others involved in easy bucks. Regardless, I think he played big role in that game.

chuckberry here. I just want to announce my man-crush on Conner. That is all.

The 3 he hit was nice but the 2 he hit, cross over, step back jumper was a big time move and reminded me why I was so excited by his play when his high school team beat Perry's when Frankamp was a junior.

How come no one ever talks about how awesome it is that we recruited Embiid away from Duke. I mean he's from Cameron. How did they let him get away.