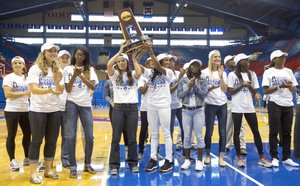 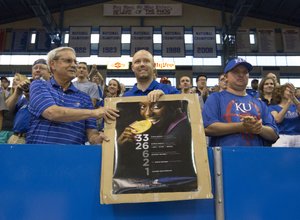 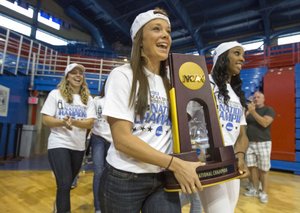 Members of the Kansas University women's track carry the national championship trophy into Allen Fieldhouse in front of a small crowd gathered inside on Sunday to welcome the team home.

Less than 12 hours after being crowned this year’s outdoor national champions, the Kansas University women’s track and field team learned that school officials had set up a welcome-home celebration for Sunday afternoon at Allen Fieldhouse.

It was then that the nerves first set in.

“We were joking when we saw the tweet,” said top point scorer Andrea Geubelle, a senior who contributed 16 points to the team total of 60 with second-place finishes in the long and triple jump. “We were like, ‘Well, I hope it’s free because nobody’s gonna pay.’ So when we walked in and we saw people we didn’t know, that was huge. It was great that there were more than five people.”

On a breezy and sunny summer Sunday, nearly 500 KU fans headed inside and filled the north end’s lower level at Allen Fieldhouse, rising to their feet when Geubelle and senior sprinter Paris Daniels led the team from the southwest tunnel to the north end, the national-title trophy in tow.

Fans, family members and former teammates held up signs, waved flags and cheered as the champs made their way to the bleachers for a brief, seven-minute lovefest that celebrated KU’s 11th team title and the first ever for a KU women’s team in any sport. The athletes and coaches matched in just about every way possible, from their white title T-shirts and backward championship caps to the smiles on their faces and sparkles in their eyes.

It was clear that this group, motivated by an oh-so-close, second-place finish at the NCAA Indoor meet a few months ago, had become one unit during its quest to bring home the hardware.

“Nothing’s ever easy,” said head coach Stanley Redwine, who joked that not long ago the women’s team was finishing 13th in the Big 12. “But we knew we had a team with the potential to win championships, and that was our goal. We all knew we had to come together and do it because it’s not about one athlete or one coach. It was a total team effort.”

After celebrating with the fans, the coaches and the team’s top four point scorers met with the media to relive their triumph.

National heptathlon champion, Lindsay Vollmer, a sophomore, spoke of simply trying to score as many points as possible without worrying about where it landed her individually. That led Vollmer to personal bests in six of the heptathlon’s seven events.

“I never thought I would place that high at a national meet,” said Vollmer, perhaps the next face of the program. “But I just wanted to do the absolute best I could for the team.”

Asked when he knew he had someone special in Vollmer, horizontal-jumps coach Wayne Pate was overcome with laughter and admitted he did not expect someone so young to be standing atop the podium last weekend.

Geubelle shared a story from earlier in the season, when freshman Sydney Conley raved about how good the red Big 12 indoor championship banner looked hanging in Anschutz Sports Pavillion next to all those blue ones.

“We pulled the (curtain) down, and she said, ‘Wow, the red looks really cool, why don’t we have more?’” Geubelle remembered. “We said before Big 12 (outdoor) we were gonna put another red (women’s banner) at the end of the other side, and then we said let’s go all the way and put a red on the national championship side, and we’ve done it. The history of KU track is great. It’s old. And it needed to be updated.”

KU’s coaches said the women’s team, which led after each day of last week’s outdoor meet in Oregon, had been charging toward a title for quite a while. And now that they’ve captured the crown, they’re hoping this is just the start of a special run.

“New goals are definitely gonna have to be set,” Vollmer said. “We just want to keep this new-found tradition going, and hopefully we can.”

One thing Redwine said should help the cause was his future ability to walk into any home and show off his NCAA championship ring.

“KU track’s back on the map,” Geubelle said after thanking the athletic department for its support. “I think people know that. And I’m wearing this hat everywhere so people will recognize me.”

Added vertical-jumps coach Tom Hays, a 1989 KU grad: “I was on the last Big 8 championship team, and I get calls all the time from my teammates when we’re not doing well. Now I’m getting good calls. I don’t have the words. It’s just big time. Wow. It’s time to go to the White House.”

Rock chalk championship! Could not be more proud of our ladies. They won with talent. They won with heart. And they won with class. Thank you from a grateful Jayhawk Nation. Your hard work earned an outstanding reward for all of us to celebrate and savor.

I get that about 500 people showed up, but why weren't there 16,000 people there to support them? Sure, it's not a popular spectator sport except during the Olympics but they're all Jayhawks and I bet they'll show up if Kansas goes to bowl game this year in football and gets a national championship or even just a final four appearance in 2014.

I love that they won the championship, but 500 just isn't fair to them.

Yes, and that exceeded expectations???

Good point. Certainly the ladies will get some due recognition at both a football and a basketball game during the coming season.

Keep in mind, it was short notice. Let's also remember that AFH is not air conditioned!

Wish I could have been there.

Rock Chalk, Lady Hawks!! 2013 NCAA National Champions in Track & FIeld!! Awesome!! Amazing! Outstanding! Beautiful!! Incredible!! No, I'm not using a thesaurus! We are all so incredibly proud of each on of you!!

That's what speed do

Congratulations to the Lady Jayhawks. You have done something truly special and brought pride to your University. Rock Chalk.

Too bad the students already left for the summer.

When I was at KU team accomplishments outside football or bball were ignored save a blurb in the UDK. KU mens swimming and track dominated the big 8 and track finished the NCAA's in the top 10 all the time but got zero recognition. These days I've seen Texas AND Texas A&M recognize other teams during football and basketball games.

Get the powers that be to recognize these ladies and coaches dining halftime at a football game AND a bBall game in AFH and do it right by bringing the seniors back to be part of it.

A little low for a basketball score but percentage-wise, it’s the same as a 90-66 romp in the Final Four finale. And they left some points on the board. No arguments. The best team won.

Congrats ladies and congrats Stanley Redwine! Indeed, the new ring (and new track facility) will make KU a plum destination for recruits. This is gonna be a fun sport to follow for some time to come.

And to add some perspective, we had only three participants on Saturday. Imagine if we had even a single distance runner scoring in one or two of the longer events. Make no mistake, Coach has put together a fantastic TEAM of athletes. This can be the foundation of continued success.

I posted last week or so a response to Kansas State in that Kansas has 12 National Championships to their NONE, NIL, NADA, ZERO......well, let's make that THIRTEEN!!!

I would give my right "you know what" for Number 14 to be a NCAA Football National Championship...c'mon Charlie, you can do it!!!!!

LadyHawks CONGRATULATIONS and, if I had been in town, the attendance would have been 501!!

I've got some really bad news Oak. K-state ALSO has 13 National Championships. I'm not happy about it, but I think we need to report the truth on here. Here's the info from the horse's ( well, cow's) mouth:

The KSU Livestock Judging Program is rich with tradition and attracts students from all over the United States. The Kansas State program dates back to 1903 and has compiled thirteen national championships, including a record setting five consecutive wins from 1994-1998.

(from the Kansas State University Animal Sciences and Industry website)

If you're a K-State fan, say it loud and say it proud. MOOOOOOOOOOOO

Yes, and how many of the farm animals were students?

Let me clarity..Kansas State has no NCAA TEAM Championships..however, their equestrian program is one of the best in America.

Gotta reduce ours by by 2 if you're going to stipulate NCAA, thou we could bump ours even more if we're just talking national championships. Debate, bowling, ...?

In all fairness, K-State has won debate national championships. I think 2 of them, if not more.

Congrats Ladies and a job well done. Many celebrate with you around the world on this achievement. Even though many of us weren't there, know you have an entire nation celebrating with you.

Congratulations Lady Jayhawks. In 2008, I drove 190 miles to greet the men's basketball team when they got home with their NC trophy. Unfortunately it's now a 1600-mile drive or I would have been there Sunday. I'm very happy to have these ladiies representing our university.

There's really not much I can say here that everyone who's already posted hasn't said, but a HUGE congratulations to the KU women's track & field team on a NCAA National Championship winning season!!

All those long hours of training and all that hard work has paid off nicely!

Let's hope this is just the beginning of a long stretch of new championships for our track & field teams!

i was there and brought over my kids....it was a lot of fun. we got to see the athletes, get some autographs and take pictures afterwards....it was a nice event.

i thought the turnout was good, especially since there was basically not a time given....someone else who came, said he heard "afternoon" basically....we heard 2 p.m., and the team didn't arrive until after 3.

the women were all beaming...very proud. a lot to be proud of...a historical national title at KU. Go Jayhawks!

The headline for this story - 'Hero’s welcome' - unfortunately, misrepresents what was achieved by KU women’s track and field team as a team. There was more than one hero - i.e., athlete or coach - who contributed to the team's efforts in winning the title of outdoor national champions.

Consequently, the headline should have said, 'A heroes' welcome.'

Congratulation to the Track team; what an amazing accomplishment.

Having said that, at this time in our history when we have so many service men and women in harm's way all over the world, risking their lives so we can have the freedom we take for granted, I hesitate to call athletes heroes. Let's call them inspirational individuals, stars, superstars...but not heroes; at least not at his time.

Thought I saw someone asking for the results. Sad that the LJW couldn't provide:

Awesome achievement ladies!!! Keep it going and get more hardwear. Your hard work is paying off!!