Notebook: Travis Releford responds to halftime criticism from Bill Self

Kansas guard Travis Releford roars after a three late in the game against Temple on Sunday, Jan. 6, 2013 at Allen Fieldhouse. 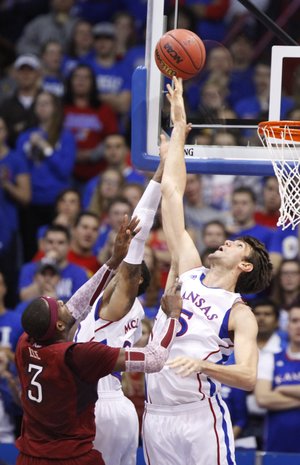 Images from Sunday's game against Temple at Allen Fieldhouse.

Kansas University senior guard Travis Releford, who had six points, one rebound, two turnovers and an assist while committing two fouls in just 12 minutes the first half, heard from an angry coach Bill Self at intermission of Sunday’s KU-Temple men’s basketball game in Allen Fieldhouse.

“He got into me. I can’t relay the message over an interview,” Releford said with a smile. “He let me know I need to change it, because I didn’t come ready to play early on.”

“I was on Travis hard at halftime,” Self said. “I thought Travis played a bad, bad first half. He didn’t guard anybody. He wasn’t aggressive. He made a couple baskets, but they were cheap.

“One thing about Travis ... gosh, was he huge down the stretch. I don’t know about his fifth foul. I thought that was a phantom trip (with :14.3 left), but those two threes he made were huge. We don’t win the game unless he came back (from fourth foul with 15:32 left; he returned with 6:53 left) and was aggressive.”

“Elijah passed it to me. I was wide-open and took the shot,” Releford said of the late trey off a feed from Elijah Johnson.

Releford said it’s great the Jayhawks were able to win despite his playing just 23 foul-plagued minutes.

“We won’t be at home, but that’s the type of game and momentum we’ll have to play through,” he said.

KU senior Johnson said it was a positive sign KU could win without Releford for a long stretch.

“That was the biggest thing for me, to not have ‘Trav’ out there. That’s my partner,” Johnson said “To have him on the bench like that can happen in March. Naadir (Tharpe, six points, 19 minutes) did some good things. Drew (White III, no points, three minutes) came in for a few seconds. We figured it out. We know we can do it now. We’re not used to seeing Travis in foul trouble like that. Usually he’s sound. He did what he had to do. Wyatt (Khalif, 26 points, 8-of-19 shooting) kept drawing contact. We might have that problem (in tourney game), somebody aiming at one of our top players to get them out of the game. We’ve got to respond to it. I’m happy they did that to us. We know we can do it now.”

Wow: Johnson hit McLemore with a crowd-pleasing alley-oop for a slam in the second half. “My only concern was, was it going to get over the defender’s fingertips, and it did. I don’t doubt Ben. He’s Superman,” Johnson said.

White plays: Self inserted White for a three-minute stretch the second half (9:52 to 6:52). “We threw Andrew out there. Even though he only played three minutes or so, that was pressure — three minutes for a freshman to play — but we had to rest Ben and Elijah a minute or two. He did fine. He didn’t do much, but didn’t screw up,” Self said. “Kevin (Young, 16 points, 10 rebounds, 6-for-6 from line) and Jeff (Withey, nine blocks, 11 rebounds, eight points) ... if you are going to pick, they had to be the two best players of the game, no question.”

Self will take the victory: “I was mad the first half at our guys. I didn’t think we were ready to play. The ball stuck. We didn’t play smart,” Self said. “That’s not who we are. We played at a fairly high level the past month, and I kind of thought we were due a game like this. To win a game against definitely an NCAA Tournament team where you have to make plays down the stretch, I think was good for all of us.”

Man, I love Relly's game. I hope he never gets in foul trouble again! Talk about stressful!

This game made me realize how important Releford is to this team. Dude's a stud. We're lost without him.

BMac did good on Wyatt down the stretch, but I was extremely concerned that Wyatt was going to run away with it after Releford picked up that fourth foul.

This team is more like a puzzle than any other team I can remember. If you take one piece out, then they are no longer complete.

In my view, McLemore's defense on Wyatt down the stretch was key. I want to say Wyatt had only two (one??) field goals during the 6-7 minutes Ben was on him. Force the opposition to score without benefit of their main scoring threat. Ben's steal was icing on the cake.

KU has won 99 of their last 100 at home; think about that for a second. It's so easy to take it for granted, but that's an absolutely incredible stat.

And the one has a huge asterisk by it. RIP Lisa Robinson.

Classic Self. Demanding wife feminine side!

He is mad at the team for being stale, because he 2-a-dayed them, and had them play a wonky defense where the on ball defender outside is supposed to crowd the trey and give the guy the drive into Withey instead of play the usual Self defense, until 7 minutes to go. Sure, Bill. :-)

Self tears Trav a new one for not being aggressive, when he is told to crowd the trey on a great driver and picks up fouls!

Oh, and by the way guys, its that time of year where I make you labor with dead legs, so you get to learn to walk on your own without so much Daddy.

File this one under the savant just about outsmarted himself. Letting them labor against a hard nosed team with less inside talent (KU was +11 on the glass!) lead to his team nearly cracking wide open with bone head plays, when he finally gave them some "stuff" to run and told them finally to go get'em on defense at 33 minutes in.

But Self is always willing to risk a loss with laboring the last non conference game to make sure they enter conference play blooded but not over confident. Recall the team laboring against UTenn two years back, when UTenn didn't even have its starting team.

Sometimes I think Self is doing this to himself, too. He is trying to see how long HE can wait before intervening tactically to get them in a position to make plays and get a win.

I agree completely with your dead legs comment. It's pretty easy to tell when they've been practiced to death leading up to a game. The only question is whether it was in the days leading up to the game, a spirited "walk through" yesterday morning, or both, that nearly did them in. I also agree with your comment that he's willing to risk a loss in some instances.

Oh well, it's pretty tough to second guess the great and powerful Wizard of Oz...he's proven his methods work.

he definitely was doing that yesterday.

He was clearly being very intentional about giving Perry and Jamari extended minutes with all the pressure on, and also about putting White out there for 3 minutes.

He also was very deliberate about getting the guys to play the new defensive strategies they'd been working on in practice.

It was possibly the first time that I'd really noticed that Self was clearly using the game for player and team development, even to the extent of taking away his advantage and risking a loss.

I felt like Kansas could have blown Temple out had they played free and loose like they did in December, but this is January now, and free and loose will only get a team so far come March.

I think that Coach Self knew all along that as long as he got EJ, BMac, Relly, Young, and Withey back in the game down the stretch and told them to do whatever it takes, that they would go out there and secure the "W".

P.S.: I said it would be close and then spread to 10 at the end. It only spread to 7. I didn't expect the bone heading at the end. Oh, well.

• Changing can lighting bulbs on a vaulted ceiling for his mom.

• Grabbing the feet of hang gliders.

• Grabbing the runners of low flying Apaches out at the I-5 rest area near Pendleton.

• Growing to 7 feet with really long arms and good hops, plus big helpings of practice and toughness.

(Note: all fiction but the last one. No malice.)

Looking at a team each season, you make assumptions as to the level of contribution of each player.

Since I've seen Ben play and know what was he capable of, personally I am not surprised at all, but for the majority of fans, he has far exceeded expectations.

HOWEVER, based on past performances and based on anticipated low expectations one player has blown away his expectation level...and that player is Nadiir.

Granted his defense is still a work in progress, but his ball-handling and decision-making coupled with his speed, as they continue to grow, gives HCBS tremendous backline flexibility that I'm sure none of us anticipated at the start of the season.

Given the condition of Elijah's knees, Nadiir may be the single most valuable albeit somewhat least recognzed surprise so far this season!!

Nailed it, oak. Naadir has come up really big for KU as a backup PG this season and he is certainly contributing more than most of us expected. I know that I've been one of the most vocal Naadir supporters, but even I didn't expect him to be this solid of a contributor this season. I hope he keeps it up!

This column kind of surprised me. I was expecting a similar piece about EJ today. EJ played awful yesterday.