Opinion: Final floor worth it for memories, charity

If one NCAA Tournament team ends with a victory and the other 67 with a loss, does that mean only one team can cherish the memory? 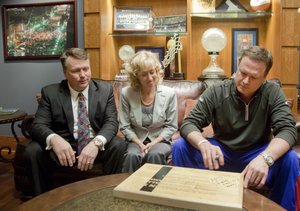 Kansas basketball coach Bill Self signs a piece of the floor from the New Orleans Superdome court used during the 2012 NCAA championship game between KU and Kentucky. Joe and Nancy Jones of Lawrence, left, acquired 50 pieces of the Final Four floor, some of which were then signed by Self on Jan. 23 and will be auctioned off for charity.

Local business owner and former Lawrence High basketball star Joe B. Jones thinks not. He believes he can turn the fresh memory of a favorite team of his into big bucks for charity.

Jones and wife Nancy acquired 50 pieces of last April’s Superdome Final Four floor — each laser-engraved and measuring 18 inches by 12 inches — and he personally will solicit contributions for Douglas County charities in exchange for each of the pieces. The Joneses approached Kansas University coach Bill Self about signing and personalizing each item to enhance the value. The coach already has signed the pieces and agreed to personalize them.

Self’s attention is trained solely on winning a ninth consecutive Big 12 title, so don’t think he’s looking anywhere but straight ahead, but he agreed recently to discuss the 2011-12 team’s appeal because he knew doing so would help raise money for a good cause.

“What was so great about last year’s team was we lost two lottery picks, plus another NBA player, plus Brady Morningstar, plus Tyrel Reed and Mario Little,” Self said. “That was supposed to be the rebuilding year of all rebuilding years that we’ve had here. To see how that particular team led by Tyshawn (Taylor) and Thomas (Robinson) with a bunch of guys who hadn’t had the opportunity to play here yet and really took a magical ride to New Orleans and had a chance to play for it all in a game that featured the two winningest programs of all-time, that was really cool.”

Picked by at least one red-faced sports columnist to finish third in the Big 12, Kansas finished second in the nation.

“I like all our teams,” Self said. “All of them will mean something to me or have a special place with me because we’ve had so much success here, but that team registers differently because the expectations were few and to see kids go from not playing to playing for a national championship just because of their dedication, their hard work and the love they have for this place. That was magical to all of us who had a chance to witness it first-hand.”

More than exceeding low expectations made last year’s team a memorable one for fans. Personal stories played a part too.

“They saw Tyshawn Taylor grow up right in front of their eyes,” Self said. “They saw Thomas Robinson go through things that no young man or woman should ever have to go through in their life. And they’ve seen the maturity and how those guys rallied around the Kansas community to give them the support that they needed to thrive under difficult circumstances and our fans really took great pride in that.”

But how much pride? Enough to make a sizable donation to charity in exchange for a nice addition to a mantle or a man cave? This makes for an interesting case study.

Those interested in exchanging a check for charity for a piece of memorabilia tied to one special Kansas team should contact Jones at his office at 785-856-2136 or on his cell at 913-269-1109.

I know I"m reading this early in the morning, so am I asleep still or did the name of the charity never get mentioned?

My favorite part about the low expectations for the 2011-12 team was the expression "Kansas Math". :-)

Jack Harry, Kansas City sportscaster and Mizzou alum picked us to finish fifth in the conference. He also championed the Mizzou move to the SEC. So...if Jack Harry ever offers you any advice - give him the Costanza treatment and do the opposite.

Great idea by Jones and his wife on the charity. Here's guessing those pieces of memorabilia will be gone by noon today.

Jack Harry isn't even a Mizzery grad. He went to SE Illinois or something.

has jack harry ever been relevant about anything!! lol

Every Tom Dick and Harry has an opinion. Most of them don't know Jack.

I have some guess that these are out of my price range...I bet that they regret giving their cell phone number to the LJW, today is going to be a miserable call day.

Hilariously, the LJW listed the wrong cell number. The poor guy with that number has been getting calls all day - including one from me. Nice fact checking LJW!!

You are dead right, MichaelC, horrible job of fact-checking by me. Joe texted me the number and hit a 0 instead of a 9 in his text. If I've told one young reporter I've told a million: "Whenever publishing a number, call it to make sure it's right." I didn't practice what I preach, a rookie mistake at the age of 53 with more than 30 years in the business. I'm apologizing to the man and Joe said he will do the same and will go beyond that. -- Tom Keegan

Yes, jack has set himself up as a bowling pin for Jayhawk fans. One of those cardboard deer with the bullseye on the side. My personal favorite, the blowup Bozo the clown punching bag, the carnival whack-a-mole or whack-a-a-hole. The list goes on. PLease feel free to pile on.

KSU offers a B.S. in Manure Engineering. They are developing a process for hardening cow chips into building blocks to be used to build the replacement for Shizzlage Coliseum. It has already been named the Shizz Brick House.

Miami Cyber Vice wants to speak with you.

I nominate Frank Haith for the John Calipari Program Imploding in Your Wake Award.

The award is self explanatory.

The statue is a tin pedestal with nano black hole on top.

What are the odds on TCU beating KU.

What were the odds on February 6th ?

In case you missed my earlier reply - Please change the cell number you've listed. It's incorrect. The person with that number has replied to a text and let me know it's not Mr. Jones. LJW - Please post the correct info so those of us interested can help out

It's amazing how far the floor thing has developed........the floor from Dallas Final 4 in 1986 that Danny played in his first final 4 was purchased by University in Vermillion South Dakota is used in the blow up dome for basketball games. Unless they sold it recently.

Are they hundreds or thousands when personalized? That would probably save a few hundred phone calls.

That sure is a handsome looking trophy with some kind of netting draped all over it in the background of the photo.