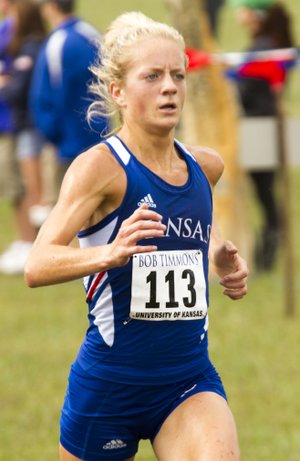 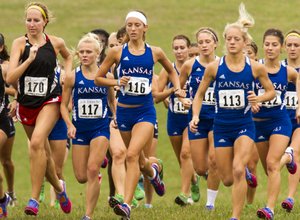 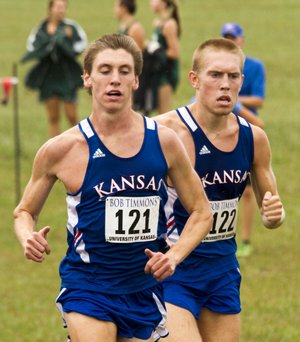 “It really helps. Rim Rock is my baby course. I have been running here since Free State,” Kilwein said of running at home. “I have run this course many times. This (winning) really helps bring up my confidence. I think this KU team is going to have a really great year.

“Our team did a really good job the first mile-and-a-half working together,” Kilwein added. “I think there were at least six or seven KU girls really close together, and that’s what our coach wanted us to do — work together as a team.”

“Really (runners), one through seven we are all right there,” fourth-year KU assistant coach Michael Whittlesey said. “We can literally run as a pack of seven. The pack really isn’t that far apart, and that’s what we really need to focus on the next eight to 10 weeks, getting that pack closer and closer together up top.”

“It was really cool because we worked really well together as a team, and we ran as a pack of four together. I guess because I was the senior they let me go for it,” Baden said of being the first to cross the finish line. “It’s awesome having teammates that would do that for me.”

As far as muddy conditions, he said: “The weather is beautiful. It’s just the course is all sloppy. There were a few spots on the course where it was real muddy and made going down the hills a challenge. You had to watch your step quite a bit.”

Noted Kilwein: “The rain may have affected the race with the times, but it really doesn’t matter because we are here to compete, and we are going to get the job done.”

Of the team’s performance, KU head coach Stanley Redwine said: “It was a great job and a great effort today (by both teams). I thought most of them ran well in a pack together, and it was great that they finished the way they did. They have been working hard, and I’m glad that showed today.”