Jayhawks most disappointed in ‘D’ 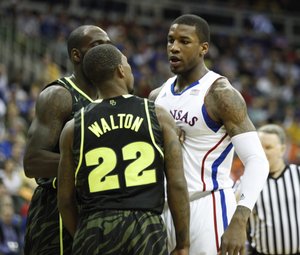 “I guess airheadedness,” the senior said following KU’s 81-72 loss in the Big 12 semifinals. “I know that there were times where people were not knowing what defense we were in or what we were doing — like, ‘Are we trapping the post or not trapping the post?’”

The issues were most evident early, as the Jayhawks allowed 43 first-half points to fall behind by eight at the break. That tied for the second-most points given up by KU in a first half this season.

“We don’t really allow people to shoot like that, and they definitely played great today,” KU center Jeff Withey said. “They got us out of our comfort zone.”

Baylor also was able to snag six first-half offensive rebounds while turning it over just six times in a fast-paced, high-possession half.

“They were getting some pretty easy jumpshots,” Teahan said. “I think we just made a lot of mental errors.”

“It was definitely lackadaisical,” Withey said. “We’ve got to get better at that.

BU’s 81 points were the most scored by a KU opponent this year in regulation.

Missouri scored 86 against KU on Feb. 25, but the Tigers had only 75 points before going to overtime.

“We’ve dug ourselves in some holes, not even in terms of the point deficit, but just the way we were playing defense,” Teahan said. “We just were not doing it the way that we should.”

That must have been one HELL of a halftime speech. They REALLY stepped up the "D" in the second half.

Glad Baylor waited until post season to reveal the new uniforms. That team has talent. Anyone can whup us if we don't have our game on.

Wonder if Omaha has enough security for next weekend, should be a rumble.

I love this team but i am tired of hearing after every loss that they didn't come out with energy, blah, blah, blah. Then dammit, you know you're going to lose if you don't come out energized so get your act together and play like coach wants you to! And as far as TRob goes, Davis has been killing him lately with a lot better play. Lately, he hasn't been playing with desire or energy. He isn't even aggressive! Come on TRob! Pull your head out of wherever it is and carry this team on your back like your mentor did! TT cant do it alone! I just don't understand why guys teams always play so inconsistently and don't win games they are suppose to. Women's teams win the ones they are suppose to and you don't see that many upsets. Just f'n go out there and win these frickin games! You piss me off with you're inconstancy!! Now just win the NCAA. NO excuses!

TRob has definitely had a drop off as of late. Unfortunately, that, in conjunction with injury, fatigue and the limited bench, really reared it's ugly head on a night where there was no obvious leadership on the floor and lapses in team dynamic. Quick, low percentage shots taken, when obviously our shots weren't falling; terrible play from the post where bunnies weren't falling even with 2 or 3 attempts; and a lost look on the faces of the guards that I hadn't seen since early in the season. I do hope that we take the time to gather and use the humiliating end result of our uninspired play (the allowance of a reprehensible Mizzery pillaging of the Big XII Championship) to help lock us in to be a focused, hard ass defending March terror that I know we can be when we set our minds to it.

Has there ever been a more nauseating sound than the tigger fans chanting "SEC" as they were winning the Big XII tournament? In fact, nauseating doesn't begin to cover how sick it made me feel. The sooner they disappear, the better.

Sorry, that word was suppose to be inconsistency but spell check changed!

With the way they apparently played (I say apparently since I didn't get to see the game), perhaps inconstancy is a better choice of words anyway.

"'It was definitely lackadaisical,' Withey said."

I assume he means laxadaisical? At least that's the word according to the ever-brilliant Mr. Knight.