Cornerback Anthony Davis watches as receiver Christian Matthews comes away with a pass for a touchdown during the Kansas Spring Game on Saturday, April 30, 2011 at Kivisto Field. 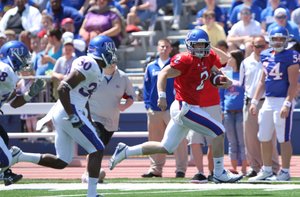 Images from the KU Spring Game

At this point, it’s probably safe to pencil in Christian Matthews for a big play in next year’s spring game, too.

Saturday, in front of 6,000 fans at Memorial Stadium, the Kansas University sophomore followed up last year’s game-winning touchdown grab with a highlight-reel TD haul that helped lead the Blue squad to a 17-6 victory against the White team.

The catch, a 53-yarder in the second quarter that put the Blue team ahead, 17-0, came over two defenders, one of whom actually helped Matthews make the reception.

“I just followed the corner to the ball,” said Matthews of senior cornerback Anthony Davis. “I had no idea where the ball was, but when he made a break on it, I just went with him and went up and got it.”

Matthews, who made just one catch for 41 yards all of last season after switching from quarterback to wide receiver the year before, was plenty pleased with the outcome. Senior quarterback Quinn Mecham, who finished 6-of-11 for 102 yards and a TD, but also was sacked four times, was more than pleased.

“It was fun to throw,” Mecham said of the TD pass. “I kind of threw the ball a bit too far inside, but Christian made a great play. He’s a very explosive player, and he makes some incredible plays. I just told him, ‘Great catch, appreciate it, you saved my butt a little bit.’”

Don’t just take the words of the pitcher and the catcher as explanation of how big the long bomb was on Saturday. Shortly after the scrimmage wrapped, coach Turner Gill huddled with his players and asked them to pick the play of the game. The overwhelming majority lobbied for Matthews’ leaping grab.

Overall, the KU offense was fast, crisp and productive on Saturday, completing 22 of 38 passes for 286 yards and two touchdowns and rushing for 138 yards on 34 carries. Sophomore QB Jordan Webb got the scoring started with a 13-yard touchdown pass to D.J. Beshears on the Blue team’s first drive. And sophomore place kicker Ron Doherty connected on three of four field goals and both extra points.

“I think our tempo today was excellent,” said Webb, who led KU with 108 yards on 8-of-14 passing. “It might have been the best we’ve had this whole spring, and I think that was good especially because it was a spring game. That’s when you want to be your best.”

Added Gill: “I think our offense, particularly when Jordan Webb was in the game, did some good things. I liked the tempo in the huddle, getting out to the line of scrimmage, getting plays called, getting lined up and executing.”

Defensively, the Jayhawks were equally as impressive if only for their ability to keep up with the rapid-fire pace of the offense.

Red-shirt freshman Pat Lewandowski, who received an extended trial run at his new position of defensive tackle, logged the most reps of just about anyone.

“I was tired,” said Lewandowski, who finished with three tackles. “The tempo threw me off, and I was tired, but I played through it, and I thought everyone did a good job with that.”

Junior-college transfer Malcolm Walker led the defense with seven tackles, and 11 other Jayhawks finished with at least three tackles. That included sophomore safety Bradley McDougald, who made a couple of the game’s biggest hits.

Defensive linemen John Williams and D.J. Marshall each tallied a pair of tackles in the backfield, while Toben Opurum, Tyler Patmon and Shane Smith also recorded tackles for losses.

Although Saturday’s stats largely were fun to review, a couple of the team’s veterans cautioned against reading too much into them.

Added Opurum: “It was just another spring scrimmage for us, but it was nice to have the fans out there. While it’s nice for everyone to get a look at what we have been working on, we still have a ways to come. We left (out) a lot of stuff from the playbook. It will be a completely different looking team in the fall.”

For some, Saturday’s spring finale was the reward for a month’s worth of hard work. The day, which some said felt just like any Saturday in the fall, started with position meetings, a gameplan, a pregame speech, headphones and hype. It ended with a lot of grins and a consensus opinion that KU was in much better shape at the end of this spring than it was a year ago.

“There’s no doubt that we’re a better football team than we were last year,” Gill said.

Uh, we sure hope so coach.

If that freshman can't play qb, i wouldn't expect much because from what i saw last year, Webb is not a D1 quarterback.

No clue if there is any improvement on the d line, but that is where the rubber meets the road for this team. If we can't move the line of scrimmage backward and pressure the qb, we can't win football games.

Look forward the watching the freshman rb, but Sims is a nice player as well, so i would assume with the return of the o line the offense will be much improved.

Just don't think we have the horses on the d line to compete in the Big 12.

I disagree with you on webb. If he can get the blocking I think he has the physical tools to get ku in opportunities to win.

Webb was bad, but I agree with the other posters that it's far too early to close the book on the guy!

Was there really only 6,000 fans there? That's awful to drop from around 15,000 last year to 6,000 this year. Anyone else have an idea if that was a reasonable estimate? I unfortunately wasn't able to make it yesterday.

Is that true, last years spring game attendance was 15,000? I was at both games and it is hard to imagine last years crowd being almost three times larger but I really do not know.

The attendance was almost exactly the same between last year and this year for the spring game. Last year's numbers were greatly exaggerated.

We are a better football team because we really couldn't be much worse!

That must mean that you're a better fan...

As with turner, the worst is yet to come!

No just a better troll!

Agree totally. The thing that strikes me the most is that the running game that we apparently have been working so hard on is still, totally, 100%, non-existant.

I don't get it either. First we were going to be a smash mouth running team with a pro style qb. Then we recruit two spread/running qb's and install a wildcat type offense.