KU hires Sheahon Zenger to be next athletic director 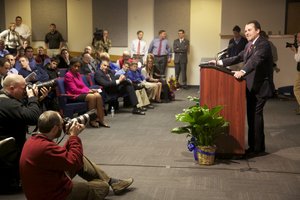 Sheahon Zenger was hired Jan. 3, 2011, as the next athletic director at KU. He succeeds Lew Perkins, who resigned in September. He'll begin work Feb. 1, 2011. 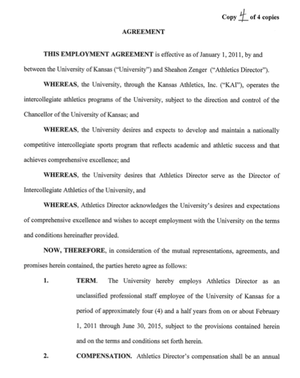 Gill giddy to work with Zenger

Kansas University chose a man with deep local roots to be its next athletic director when it announced Sunday that Illinois State’s Sheahon Zenger has been hired and will be introduced today at a 1:30 p.m. press conference.

Zenger, born in Salina on April 13, 1966, received his undergraduate (1987, English and secondary education) and master’s (1992, journalism and mass communications) degrees from Kansas State and his Ph.D. from KU (1996, educational policy and leadership). Zenger’s father, Weldon, also received a Ph.D. in education from KU while the family lived in Lawrence from 1968 to 1970.

“We lived in the little yellow house on 21st Street Terrace, with a wrought-iron fence on the little porch, and a big, old oak tree in the front,” Zenger said by phone Sunday night. “Those are my earliest memories. The house is still there and it’s still yellow. I drive by it every time I’m in Lawrence.”

Zenger said that he’s wearing a Gale Sayers jersey in his fourth-grade picture and that he wore the No. 10, in honor of Bobby Douglass, “everywhere I went until I got to junior high.”

“The first basketball game I ever saw was at Allen Fieldhouse and the first football game I ever saw, I saw from the hill (at Memorial Stadium),” Zenger said. “My dad and brother got in for a dollar apiece, and my mom (then teaching at South Junior High), my sister and I sat on the hill. My parents were watching their money in those days.”

After that, the family moved to Hays, where the parents taught and Sheahon “listened to Bob Davis calling games on the radio” there.

Zenger was KU’s second choice — Bubba Cunningham was offered the job but turned it down and signed a contract extension to stay at Tulsa — but those who know Zenger best describe him as first-rate.

“I will say that it is a home run for the people of Kansas,” said Illinois State basketball coach Tim Jankovich, a former assistant at KU to Bill Self. “He was a real special A.D. and even a better person.”

Dr. Sheahon (pronounced SHAY-un) Zenger is in his sixth season at Illinois State, the same school from which the late Dr. Bob Frederick came to Kansas to serve as A.D.

“I think he is a perfect fit for KU,” Jankovich said. “When I look at this, I feel he’s been preparing for this position his whole life. Look at him being a football coach on the college level, to having a Ph.D, connecting with faculty, being a fundraiser and athletic director himself already. Every step of the way, he’s marked the box. Everyone will love him there. He is home-grown. He has no ego and has tremendous character.”

Zenger succeeds Lew Perkins, who significantly upgraded the school’s athletic facilities and enhanced fundraising, but resigned in September in the wake of a ticket scandal that resulted in the indictment of five employees of KU Athletics and questions about exercise equipment delivered to his house.

Sean Lester will continue in his role as interim athletic director until Zenger starts his new job Feb. 1, 2011.

Zenger said he had been in contact with the search committee “months ago,” but did not talk with Chancellor Bernadette Gray-Little until after Cunningham turned down the job.

“When I thought about what it was that struck me about the chancellor it was that she’s a warm, gracious and sincere person,” Zenger said.

He said the scandal did not make him think twice about pursuing and accepting the position.

“Nah,” he said. “We’re moving forward. The history and the tradition of KU, to me, just overrides everything.”

Before going to ISU, Zenger was associate athletic director for development at K-State (2002-2005).

Zenger has an extensive football background. He coached the sport at Manhattan High in 1987, then spent a year at Drake University as a graduate assistant and then, at age 23, served as assistant recruiting coordinator and director of football operations for KSU coach Bill Snyder.

From 1993-95, Zenger was editor of American Football Quarterly — a magazine for football coaches. In 1996, he became recruiting coordinator for South Florida before accepting the same position with the University of Wyoming the following year. In 1998, Zenger was promoted to assistant head coach at Wyoming.

At ISU, Zenger served on numerous NCAA committees, including the NCAA Division I Committee on Student-Athlete Reinstatement.

Zenger and his wife, Pam, have three children: Luke, Abby and Jake.

“This is a guy who lived in a house you can see from Allen Fieldhouse when he was a kid,” Jankovich said. “If there’s not beauty in that, I don’t know beauty anymore.”

“He is the kind of man you’d like your son to grow up to be,” Bailey said. “He is smart as hell. He is generous. He remembers his roots. He is respectful.”

Oh well, if dude is going to head us into the MVC come next round of conference realigment maybe we will follow WSU's lead and do what they did to their football program.

Maybe hoping this dude has ties to some ksu assistants that went on to have success to coach us after next season. Mangino, Leach, dude from south florida

Just a history lesson for everyone... Lew Perkins was the one that disbanded the Wichita State Football team

He did the same for us!

Zenger will be a stud. It's not always necessary to go out and hire the prettiest name. Sometimes there's something to be said for a guy that has a good mind and will get KU rolling again.

As I have shared in previous posts. This guy is a winner and will do a tremendous job for us. He has been successful in every position he has held and if we are fortunate this will be his last stop. Welcome home Sheahon and Pam...Rock Chalk!

Does Indiana State have a track around its football field?

Have to say Chancellor BGL gave a less than inspiring interview during yesterday’s game.

I will open up my wallet and hop on Bandwagon Zenger when the stench in the athletic department is cleared out.