Kansas State guard Jacob Pullen drives up the court against North Texas guard Josh White during the second half Thursday, March 18, 2010 at the Ford Center in Oklahoma City. 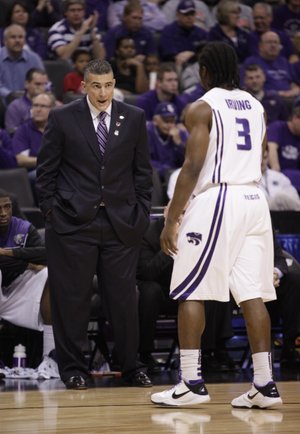 Oklahoma City — Kansas State went over the scouting report and stretched, sat down, then stretched again. As the game before theirs ran into overtime, then a second, the Wildcats weren't sure what to do, the nervousness building with each passing minute.

All those upsets and close calls on TV didn't help, either.

Shaking off a long delay before tip-off and a jittery start, No. 2 Kansas State rolled to an 82-62 rout of North Texas on Thursday to avoid joining the list of opening-day upsets in the NCAA tournament.

"We were getting antsy," Kansas State guard Jacob Pullen said. "We were very excited to get ready to play that game."

Maybe a little too excited.

Shooting poorly and allowing North Texas to beat them on the offensive glass, the Wildcats (27-7) got off to a shaky start, providing hope for the 15th-seeded Mean Green. But Kansas State squashed any thought of an upset with defense, stymieing Josh White's forays into the lane while holding North Texas (24-9) to 31 percent shooting.

Pullen and Curtis Kelly added 15 points each, and Kansas State had a 46-21 advantage inside to reach the second round for the second time in three years.

Next up is No. 7 seed BYU and sharpshooter Jimmer Fredette on Saturday in the West Regional. The Wildcats should have an advantage, too; while they cruised in the first round, BYU needed two overtimes to beat Florida.

But with a shooter like Fredette, who had 37 points against Florida, there's no telling what can happen — and the Wildcats know it.

North Texas gave Kansas State a brief scare, but couldn't answer when the Wildcats punched back.

George Odufuwa kept the Mean Green close early and finished with 10 points and 10 rebounds, and Tristan Thompson was one of the few effective players against Kansas State's pressure, leading North Texas with 28 points.

North Texas' leading scorer had trouble getting to the rim against Kansas State's length and struggled from the perimeter, too, finishing with three points on 1-of-10 shooting.

"They are some pitbulls," said Thompson, who hit all 10 of his free throw attempts. "They kept coming at us and we took some punches. We kept coming back, but they kept throwing them."

The win is the latest step in Kansas State's transformation into the program Martin envisioned when he took over for Bob Huggins three years ago.

The high-decibel coach once considered a babysitter for Michael Beasley has molded the Wildcats in his always-the-underdog image, getting them to play every possession as if it were the last of their careers.

Kansas State set a school record for wins and earned its best seeding ever, nabbing the second-highest of the Big 12's record seven NCAA berths after a season that included five wins over Top 25 teams.

Once hidden by the plains of Kansas, the Wildcats have moved into the national spotlight with their athletic, relentless style. They were even picked to reach the Final Four by President Barack Obama, who said he might tap the fire-breathing Martin to help him push through his health-care bill on Capitol Hill.

The Wildcats have enjoyed the attention, even if it hasn't changed their mindset.

Coming off a disappointing loss to top-ranked Kansas in the Big 12 title game, Kansas State went back to its nobody-believes-in-us mantra, turning practices into battles that left Kelly proudly sporting two cuts on his lip.

Turns out, North Texas was ready, too.

Spinning the Wildcats' game around on them, the Mean Green hounded Kansas State into one miss after another and had seven offensive rebounds in first nine minutes to stay within 18-13.

A surprise, but maybe not shocking.

The Mean Green set a school record for wins, won the Sun Belt Conference tournament and ended the season on an 11-game winning streak. They didn't embarrass themselves in two games against Big 12 teams, either, losing by 14 to Oklahoma State and 10 to Texas A&M.

"There was a sense of toughness and just the level of competitiveness (with) which they play that I got off the (scouting) tape, and that obviously was exactly what took place," Martin said.

The success didn't last against Kansas State, though.

Led by defense, Kansas State got out on the break, hitting three straight layups — two by Pullen — to go up 30-16 with just over 5 minutes left. Clemente took over after that, hitting two late 3-pointers, and Kansas State held North Texas to 5-of-24 shooting to lead 41-25 at halftime.

North Texas made a brief run in the second half, cutting a 26-point lead to 14 with 5½ minutes left, only to see Kansas State score six points in the next 68 seconds.

"I thought we were right back in striking distance, but they came back and ran it back up to 20," North Texas coach Johnny Jones said. "I think that's the sign of a team that was poised. We made our run and they made the plays they needed to."