Kansas quarterback Todd Reesing gets rid of the football as Colorado defenders Marquez Herrod (90) and B.J. Beatty close in during the third quarter Saturday, Oct. 17, 2009 at Folsom Field.

Off the unbeaten path 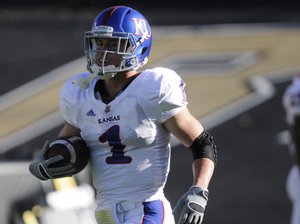 “All these years we’ve been playing him, he’s been beating us. He’s been like a thorn. We couldn’t get him out,” Brown said after CU’s 34-30 victory Saturday night. “This game, it felt great to go out there and be able to finally get a win against him.”

The postgame mood of the Buffaloes after their upset victory over the Jayhawks differed depending on the person talking.

For the players, it was all smiles and laughs and talk of rejuvenated confidence.

“I think we can win out,” CU sophomore running back Rodney Stewart said. “To finally get a win against a great team, that’s all we’ve been lacking. To do that, I think we can beat a lot of great teams.”

For CU coach Dan Hawkins, though, it was no smiles and an emotionless face while talking with reporters. One might have figured that his team had lost the game.

“Again, it’s always, ‘Stay off the mountain. Stay out of the valley,’” Hawkins said. “That’s hard.”

It has been awfully hard for Hawkins to avoid the valleys lately. He has dealt with questions about his job security and also the decision to continue playing his son, Cody, at quarterback.

Many of the coach’s comments afterward seemed to relate to both his team and himself.

Even after facing some of the recent criticism in the community, Hawkins lauded CU’s fans for their help in Saturday’s victory.

“I’ll be honest with you: The fans here have been really great since I’ve been here. I’ve said that from the first year we were here, and there weren’t a lot of wins,” Hawkins said. “If we’re all going to get to where we want to get, we’ve all got to buy in and do this thing together.”

The coach cracked a smile only once in the nine-minute media session, laughing when he was asked if he, personally, needed the victory.

“We needed the win against Colorado State, too,” Hawkins said. “Every coach needs every win.”

Meanwhile, Tyler Hansen — CU’s sophomore quarterback who decided last week to pull his red shirt and play this season — was 14-for-25 for 175 yards with two combined touchdowns against KU.

After the game, he seemed pleased with the choice he’d made.

Which unit deserves the most blame for KU's 34-30 loss to Colorado?

“To finally get a win against a great team, that’s all we’ve been lacking…”

After the game, he seemed pleased with the choice he’d made. “Right now, it’s the best decision,” Hansen said. “We just beat Kansas.”

As tough as it has been to absorb last night’s loss, it is nice to read comments like this from opposing players. While we always hope for and expect more for our program, it helps put into perspective and reassures us as to just how far our program has come in the last seven seasons with Coach Mangino at the helm.