The concessions area on the north side of Allen Fieldhouse. 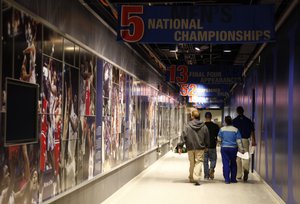 Improving the tradition-rich building, however? That’s a different story. “This facility is going to be here for a long period of time,” Perkins, Kansas University’s seventh-year athletic director, said proudly Wednesday after a media tour of the renovated fieldhouse.

Perkins spearheaded a round of fieldhouse improvements in 2005 that included a cleaning of the exterior, new windows, video board and sound system, as well as the creation of the Booth Family Hall of Athletics.

The 2009 upgrading includes an expansion of the Hall and creation of a donor atrium, as well as improved concessions, wider concourses, restroom upgrades and installation of terrazzo floors throughout the building.

A bridge has been erected connecting the parking garage to the fieldhouse on the north end.

There also are a batch of new amenities for the KU men’s and women’s players, including new locker rooms, training rooms, film rooms and lounges as well as a shared dining hall and cardio room.

“What this has done for our athletic program — obviously our men’s and women’s basketball — it puts us in a whole different league now in terms of our facilities,” Perkins said. “We’ve obviously had great, great, great basketball programs here. Now this will allow us to stay at the highest level and continue to compete with the best of the best.”

The improvements in the fieldhouse came at a cost of $7.8 million. They were part of a $42 million project that also included a men’s and women’s practice facility and new academic center for all student-athletes.

Brian Hanni of Lawrence's KLWN 1320, Rock Chalk Sports Talk, described the upgrades. He said AFH looks incredible and the additions to the Hall of Athletics are great too. This summer he was at the Dean Dome at UNC. Brian said they are worlds apart. The facilities at AFH are without a doubt the best college basketball environment in the country - it isn't even close. This may be Lew's greatest legacy.

anyone know what time you have to get to allen fieldhouse to get good seats? for late night?

RCJ, Unfortunately, most the really good seats are reserved for VIPs. But, if you get in line by 4:30, you should be ok.

You just gave me a very interesting idea by remarking that the VIPs get most really good seats at Late Night these days.

How about having KU stage two late nights: one for VIPs and one for the students.

Late Night in the Phog: Students only. Admission reasonable. Skits, etc. Starts at Midnight just like the old days. Raucous and outrageous. Totally contemporary. Earliest evening allowed by NCAA. No cameras. No ESPNU. Just coach, team and students. Party time. College basketball pre-season the way it was meant to be.

Late Night VIP: Held the first Friday or Saturday night after Late Night in the Phog. No students. Lawrence Welk the music for the oldsters. Champagne wishes and caviar dreams at the refreshment stands. The one for the VIPs can be just an intrasquad game so the VIPs can get an early look at the team. It can be held early in the evening so that the old fogies can get home and get into bed early. 7-9pm

Everyone gets what they need.

Lew gets two sets of admissions and maybe he can drag in even more adults for higher ticket prices with the good student seats available during Late Night VIP. Maybe he can even get it televised locally.

No such thing as a bad seat in the fieldhouse. Pansies.

Do we seriously want to charge admission for Latenight?????? This is Kansas. Not Kentucky.

Latenight is the one time some folks can ever afford to go to Allen Field House and have an experience of a life time, and we suggest to charge admission? I would not go to Latenight if that was the case. I would rather save my ticket money and spend it on an actual game ticket during the season. Everyone who has ever been to Latenight knows that by the start of the second half of the mens practice, most folks are getting pretty restless.

The majority of the VIP seats are for friends and family of the players and staff. Not to mention recruits (both FB and BBall) and their parents and/or friends.

It is not as Jaybate imagines.

KKF - true - there are no bad seats at AFH. But, if someone gets there around 5:30, they are going to be in the upper level near the corners.

Jayhawk86 - The west side lower level is probably 80% reserved for VIPs as are all the chair back seats on west side. There cannot be that many family members and recruits. The VIP list must include a lot of big donors.