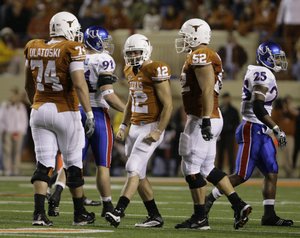 How would you grade the KU football team's performance against Texas?

“What I do know is that Mark’s won a lot of games. I do know that he did a great job when he was at Oklahoma as the offensive coordinator,” Brown said after his team’s 51-20 victory over KU on Saturday night. “And I also know that when you can only play 11 kids, there’s a lot of disgruntled kids on a football team. I do know that for a fact.

“I’m not calling out those kids that have said something, but he’s been there for eight years, and I’ve got a great respect for what he’s done on the field, I know that.”

Brown said he heard all week from people believing that the Jayhawks would come into the game unmotivated.

That’s not what he saw Saturday.

“That team didn’t look like there was anything wrong with it tonight. I thought they fought really hard,” Brown said. “You don’t fight that hard unless you’re fighting for coaches and yourselves. I thought that sent a message that those kids haven’t given up yet.”

One was quarterback Todd Reesing, who grew up in Austin and went to Lake Travis High School.

“What a great career,” Brown said. “I told him, ‘You’ve done for Kansas what Colt’s done for Texas.’”

Reesing completed 25 of 39 passes for 256 yards with an interception.

Brown sought out KU wide receiver Kerry Meier after the game, but couldn’t find him on the field.

Brown admitted part of UT’s game plan was to slow down Meier, and the senior still had seven catches at the intermission.

“He’s been unbelievable, too,” Brown said. “To be a quarterback and go in and lose and be unselfish and be a second-team quarterback ... and he’s such a great receiver.

“They call him a possession (receiver), but he can run. He just makes so many other plays underneath.”

Brown’s praise continued to Dezmon Briscoe, who, like Reesing, also grew up in Texas (Dallas).

“Briscoe’s one of those big, tall fast guys, and what a game he had tonight as well,” Brown said. “I thought he and Todd were probably sending a message to us that we messed up.”

Texas is a class act. Their band played our Alma Mater prior to kickoff and hailed to old KU. Not sure if it was sympathy for the past week's grief, or good old fashioned Texas hospitality, but it was endearing nonetheless.

It's too bad we couldn't have given them a better game, but I'll be rooting for Texas to bring the national title back to the Big 12.

they closed off the north end zone last year and added more seats and a new end zone club. there is some speculation that they might close off the south end zone and go to 125,000+

“I’m not calling out those kids that have said something, but he’s been there for eight years, and I’ve got a great respect for what he’s done on the field, I know that.” Coach Brown

Roastra posted yesterday: There is so much more to this story then anyone knows. Lew wanted to let Mangino go last year .... Lew put Mangino on notice for both his performance and behavior. This year as soon as some players parent approached him with concerns about Mangino, he then went to the team to get more insight. Then he took it to the chancellor and she was aboard based on what he had found out.

Finally, Lew did need to disclose an investigation was under way and he was correct in doing it now and not after the season for several reasons which I am not going to go into here.

Once the final report comes out, all of the Mangino supporters will feel blindsided and disappointed that they supported him.

maybe but why now?

I'm glad Texas did something nice for a change. When we were in TX for the Fort Worth bowl we were insulted and actually cussed at by pretty much every Texas fan we ran ran across. And we were in FORT WORTH playing HOUSTON. Haven't looked kindly at Texas fans since then.

Now, because we have to be prepared to move on and do so quickly. This is a prelude to dismissal. It takes a couple of weeks to line up the ducks. If he had waited until the end of the season, we'd be behind the curve in coach hunting.

Perkins needs to go. What a dirtbag.

All of you Perkins fans, who love guys that can't take a poke in the chest. Wait for the next 3-4 years when 5-7 will look like a trip to the Rose Bowl. We'll be lucky to be Free State HS next year. Hope you happy with your kinder-gentler coach next year.

"Texas is a class act. Their band played our Alma Mater prior to kickoff and hailed to old KU. Not sure if it was sympathy for the past week's grief, or good old fashioned Texas hospitality, but it was endearing nonetheless."

Must suck to be pitied. Mack can afford to be humble after a beatdown like that. Most people thought the bottom would fall out next year with Pick but it comes a year early. Prepare for a complete overhaul. Until then good luck next week because you're gonna need it.

We execute and play like we did in austin and we will whip MU tail.

If they double triple team Meier like T did, they don't have the horses to protect all the other wide outs...we will set a passing record in arrowhead. can't wait, let coach Fam give the in locker room half time pep talk.

It's difficult to know what the top brass at KU thinks about this sordid affair, especially as the media has not been proactive in trying to get them to comment. However, listening to Chancellor Hemingway the past few years, it sounds like there's not a whole lot of admiration on his part for either Mangino or Perkins. It will be interesting to see how this plays out. Stay tuned.

Pacer......if Heminway were still the Chancellor, your comment may have had some value.

lighthawk.....you were the one saying before the game that KU was going to win....over and over and over on every football thread. We're supposed to believe your analysis of KUvMU now? Texas didn't triple team Meier and most of the night they never double teamed him. They have superior athletes that can hang with Meier. I would be more worried about OUR ability to hang with Danario Alexander next week than their ability to cover Meier or Briscoe. All I know is you throw out the records in this rivalry--and it's a good thing for us this year.

Get a win for the Big Man. Thanks for all you've done, Coach.

I hoped we would beat Texas, and posting it didn't make it come true. I was hopeful, yet David vs. Goliath didn't materialize. I was wrong. My attempts at posting a Kansas win in Austin (over and over and over) was to take some attention off the other story & point out the game should have been our prime focus. I was guilty as any for losing my focus, the investigation will play out, the game and beating MU should be our prime goal.

I'd like Mangino to get another year as well but I fear so much damage has been done in the recruiting area that this will ultimately cost him his job.

Hope Texas routs Nebraska and then gets routed in the title game.

jhokfan: unless MU is playing anyone anytime in any sport, I root for any big 12 team, unless they are in March and in an elite 8 game or if KState is playing anyone out of conference, and then not when A&M etc. etc. well, maybe you are right afterall...heck with it.

callihawk= where did you see that 10 recruits have de-committed? Oh and are you saying MM is fat?

Calihawk- That was a despicable post. Where do you get off talking to someone else that way? I agree with you that Mangino should be let go. But the hateful trash spewing from your mouth is not welcome here.

This is a witchhunt... Perkins was just looking for a reason to "open an investigation". This stinks.

To pull Kansas Football out of the toilet required and requires a different and rugged approach. They play a game that has violence, and that violence has to be inflicted rather than absorbed. Who's gonna do it? You? You, Lew Perkins? Coach Mangino has a greater responsibility than you can possibly fathom. You weep for Wright, and you curse the Coaches and coordinators. You have that luxury. You have the luxury of not knowing what Coaches everywhere know -- that Wright's chest poke, while tragic, probably was required; and a coaches job, while grotesque and incomprehensible to you, requires yelling and screaming and chest poking.

We use words like "honor," "tradition," "loyalty." We use these words as the backbone of a life spent turning around a losing football program. You use them as a punch line.

Coach has neither the time nor the inclination to explain himself to a man who rises and sleeps under the blanket of the winning football program that he provides and then questions the manner in which he provides it.

Perhaps Perkins should rather just say "thank you" and go on his way.

Brown said he heard all week from people believing that the Jayhawks would come into the game unmotivated.

“That team didn’t look like there was anything wrong with it tonight. I thought they fought really hard,” Brown said. “You don’t fight that hard unless you’re fighting for coaches and yourselves. I thought that sent a message that those kids haven’t given up yet.”

The fact that Mangino can have this huge distraction over the program yet still prepare and motivate his players for a game that everyone knew KU would be out manned says a lot for his coaching abilities. I certainly hope they can continue and pull together against Missouri.