Kansas forward Marcus Morris watches as a last-second shot by Memphis guard Elliot Williams as it goes up, Tuesday, Nov. 17, 2009 the Scottrade Center in St. Louis. Williams missed the shot and the Jayhawks won, 57-55. 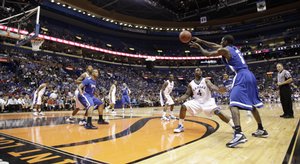 Kansas wasn't playing up to its potential Tuesday as the Jayhawks barely escaped with a two-point victory against the Tigers of Memphis. Cole Aldrich played a solid first half.

St. Louis — Elliot Williams couldn’t have felt better about his three-point shot to win the game in the final seconds.

“It looked perfect, but it just rimmed in and out,” the Memphis guard said after Kansas University’s 57-55 victory Tuesday night at the Scottrade Center. “That’s a tough one. Got to live with it.”

Williams wasn’t necessarily thinking three when he received the ball up top with Memphis trailing by two, but he noticed KU’s Marcus Morris was backing off while expecting a drive to the basket.

“We didn’t really want to go into overtime with them, but at the same time, if I had to drive, it was there,” Williams said. “He was on his heels, so I went ahead and went for everything.”

After the last-second shot hit back iron, Williams collapsed to the court and grabbed his head in disappointment.

The sophomore said only one thought crossed his mind: He and his team had just missed a chance to knock off the No. 1 team in the nation.

“All you can ask for is an opportunity to win the game,” UM coach Josh Pastner said, “and that’s what we had.”

“We got out in passing lanes,” Williams said, “and just did what we had to do defensively.”

The undersized Tigers couldn’t find a way to stop KU center Cole Aldrich, though. The junior finished with 18 points on 7-of-10 shooting to go with 11 rebounds.

“Aldrich, he’s a big guy. What they were doing is throwing over,” Williams said. “The guards ... it’s hard guarding Xavier, because you can’t really sag in that much. He’s a great shooter. And also Sherron Collins. It was a tough situation for us, but, you’ve just got to do the best you can do in certain situations.”

Even after the loss, some of the Tigers believed their effort on national television would help their reputation going forward.

“I really, truly think we proved a point tonight.”

I thought Marcus did a pretty good job staying in the face of Williams at the last shot. Of course Williams flops, looking for the foul, but that's what he's supposed to do - it worked on Kieff earlier in the game. Glad he missed & glad the boys now have a clear picture of what they need to work on.

It was early and it was ugly, but what a great match up to start the season.

The team needed a close game to bring them back to Earth and they got it. I'm just glad they got a wake up call without getting a loss.