Stuck on the bubble

Kansas head coach Bonnie Henrickson hangs her head as time dwindles late in the second half after an Oklahoma bucket Friday, March 13, 2009 at the Cox Convention Center in Oklahoma City.

KU women fall to No. 3 Oklahoma

Danielle McCray scored 22 points against the Sooners, but the Jayhawks couldn't pull a win against Oklahoma. They lost 76-59. 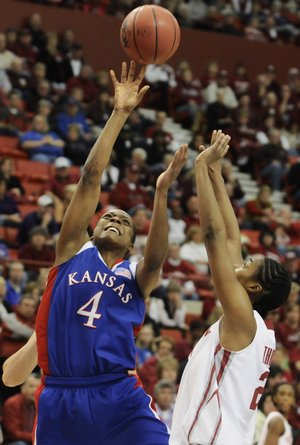 KU coach Bonnie Henrickson talks to reporters after the Jayhawks' 76-59 loss to top-seeded Oklahoma in the Big 12 women's basketball tournament on March 13, 2009.

Will the KU women make the NCAA Tournament?

On Thursday morning/afternoon, Paris showed the stuff that makes her so confident in leading her team to a 76-59 victory against Kansas University to advance to the women’s basketball Big 12 Tournament semifinals at Cox Center.

Even though she sat out the final 11:41, Paris totaled 27 points, 14 rebounds and six blocked shots in bouncing Kansas from the tournament and onto a most precarious spot on the NCAA Tournament bubble.

“The way Kansas has played in the last three weeks of the season, they have given themselves a shot,” Oklahoma coach Sherri Coale said. “They are in the conversation.”

The Jayhawks seem to enter most conversations among women’s basketball bracketologists — yes, they exist — at the point when near misses are discussed.

Coale sat in on a mock tournament selection committee meeting and learned a thing or two about how teams are counted in and out. Kansas (18-13) finished its season winning five of seven with quality victories against nationally ranked Baylor and Iowa State.

“It will be a big part of the discussion, I can promise you that,” Coale said of KU’s strong finish. “How teams play down the stretch is important. Who they are playing, when they are playing well. The committee will look at this game, even though Kansas lost. And they will have the little eye test, you know. Well, this player is pretty good, and this player is pretty good. Now, to back all that up, it’s going have to be an RPI number and the strength of schedule, and there has to be some numerical backing for that.”

KU coach Bonnie Henrickson said she figured after Thursday’s loss that her team would finish “somewhere in the 40s” in RPI.

“I think for us, in a league that is so strong, I think your conference affiliation, but what we have done down the stretch, too, I think gives us an opportunity to be at the table,” Henrickson said.

In the likely event the Jayhawks are excluded from the NCAA Tournament field, they will extend their season in the WNIT.

A shocking upset over the Sooners almost certainly would have been enough to earn an at-large bid for Kansas, and for a while it looked possible.

Danielle McCray, despite getting double-teamed every time she caught the ball on the wing, led Kansas with 22 points, and she also dished five assists. She played all 40 minutes.

“McCray earned every point she got,” Coale said. “I thought she was fantastic, and I told her so after the game. We didn't give her easy baskets.”

KU’s inability to do much scoring near the basket because of Paris’ intimidating presence enabled Oklahoma to apply all that pressure on McCray on the perimeter.

Neither sophomore Krysten Boogaard nor freshman Aishah Sutherland (10 points and five rebounds off the bench) had the bulk to slow down Paris. When a reporter asked McCray what advice she gave Sutherland to try to help her defend Paris, Henrickson interjected with a one-liner: “Gain 80 pounds in a hurry.”

Making either tournament will be a big step forward for the program and something to build upon for next year.

Whichever tournament they make they need to play at their best and, win or lose, finish the season on a high note.

Bonnie better be praying she makes the tournament. To date her results have not been good enough and she has to be considered on a very short leash.

Keithmiles, I understand your logic but I'll bet she gets two more years unless she gets 12 wins or less next year. Bonnie brings in smart girls who represent the university well and she continues to get better talent. The fact that they beat Baylor and Iowa State on the road is a testament to how much the women have improved. Once our point guard comes back next year they will be tough. The big 12 is a tough league and I think it takes longer to build a women's program than a men's. Just a hunch though.

really? With out conference record, does anyone REALLY believe that we will make the NCAA tournament?

Congratulations to the ladies on finishing the regular season strong. But I don't think it's realistic to call us a "bubble team."

She'll be gone after this season unless KU makes it into the NCAA Tourney or is in the finals of the WNIT.

They have a very good chance, considering they have been in all of the conversations regarding the "bubble teams". Don't say anything negative until they have announced the brackets. Thanks, GOOD SEASON LADIES, KEEP THIS UP NEXT YEAR AND WE COULD BE DOING EVEN BETTER!!!!! :)

They didn't make it. Looks like we'll have to wait to see where they land in the WNIT.

As long as they make the WNIT, it's a positive that can be built upon.