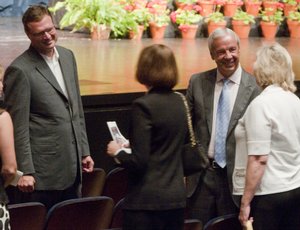 Rarely, if at all, did Bob Frederick appear in public wearing shorts and a T-shirt. Frederick, in fact, may have made Beau Brummell look like a hobo.

“Everybody remembers my dad as a snappy dresser,” said Brian Frederick, oldest son of the former Kansas University athletic director who died tragically last Friday after a bicycling accident.

Brad Frederick, another son and an assistant basketball coach at Vanderbilt University, recalled a couple of months ago when he and his dad were at the NCAA men’s basketball championship game in Detroit.

“I had to talk my dad down from wearing a coat and tie to the game,” Brad said. “So he wore a jacket, an open-neck shirt and a sweater vest.”

Brad’s story brought chuckles to the crowd of perhaps as many as 1,500 who poured into the university concert hall that seats around 2,000.

Other stories about Frederick’s high-end haberdashery also elicited laughter from the throng that gathered to pay tribute to a man considered a colleague, close friend or just plain friend.

Katie Martincich, a KU volleyball player, was enrolled in a couple of the sports management classes Frederick taught in the School of Education.

“When I went into his classes,” Martincich said, “I knew he would always be the best-dressed man in the room with his three-piece suits, ties and handkerchief in the pocket.”

Max Urick, former athletic director at Kansas State, confessed how he hated to sit next to Frederick during Big 12 Conference meetings because he made Urick look sartorially insufficient.

“He would come to those meetings,” Urick said, “and it would be a lesson in fashion for us.”

Then there was Mark Frederick, another son, who told how he came to Lawrence from his home in Denver after the accident. Because he didn’t want to believe he might need it, Mark did not pack a suit.

So he wore one of his dad’s suits to Wednesday’s service.

“You can imagine the fun I had in his closet,” Mark said, grinning.

Interspersed among the lighter moments were recollections of a man almost universally admired and respected among those who knew him or were touched by him.

The Rev. Peter Luckey, pastor of Plymouth Congregational Church where Frederick had served in many layman roles, delivered a eulogy calling Frederick “a true Mensch.”

“A life so well-lived we are still in shock, still stunned this life has been taken from us,” the Rev. Luckey said. “There are no answers, at least none that would satisfy us. There’s no celestial ref that keeps it all fair.”

The pastor related how Frederick, who was 69 when he died, had donated his organs, saying they had already “saved three people, and his skin has helped 50 more.”

David Ambler, a former KU dean of students and a close friend from their days on the university athletic board, spoke on behalf of the faculty.

“If I had to use one adjective to describe him,” Ambler said, “it would be ‘genuine.’”

Martincich, speaking on behalf of the students, said: “I’m blessed to have been influenced by him. I was fortunate to be inspired by this wonderful man.”

KU volleyball coach Ray Bechard, speaking on behalf of the athletic department, marveled at Frederick’s ability to make everyone seem important, saying: “He remembered your name. He personalized every experience.”

Added Urick: “There was absolutely nothing bad about him. He’s a great model for our profession.”

A wide spectrum of people from all walks of life — although mostly from the sports world — were on hand for the 70-minute service.

Roy Williams was there with his wife, Wanda. Williams, of course, was hired by Frederick when he was an obscure assistant coach at North Carolina back in 1988. Prior to the service, Williams gave Frederick’s wife, Margey, a long and warm hug.

Practically the entire current KU athletic department staff attended as well, including AD Lew Perkins and his wife, Gwen; associate AD John Hadl; football coach Mark Mangino; and men’s basketball coach Bill Self and all of his assistants. Also on hand to pay their respects were federal judges John Lungstrum and Deanell Tacha.

Memorial contributions can be sent to the Warren-McElwain Mortuary, 120 West 13th, Lawrence, 66044.

I clicked on the link to see the Frederick boys and had to sit through a Prairie Band Casino commercial. I know your website needs to make money, but to add advertising to sons eulogizing their father? That's really tacky.

Frederick was a class person and this site should have treated his final moments without classless casino advertisements.

Great story, Chuck. You did good for those of us who did not make it to the services.

Sorry, but I have to agree about the casino ad. Tasteless.

I mean why stop with Casinos? Get all the dog track, bail bonds, and maybe even Hooters ads you can. And in the name of a buck you can place them with reports about 15-year-old recruits, NCAA infractions or player misconduct stories.

Seriously, if you have to show the ad, don't even show the eulogy.

""The pastor related how Frederick, who was 69 when he died, had donated his organs, saying they had already “saved three people, and his skin has helped 50 more.”"

Now that is just awesome. One guy saved three lives and helped 50. At 69?