Frustrated Nebraska guard Cookie Miller takes his time getting up after being whistled for a blocking foul on Kansas guard Tyshawn Taylor late in the second half Wednesday, Jan. 28, 2009 at the Devaney Center in Lincoln. 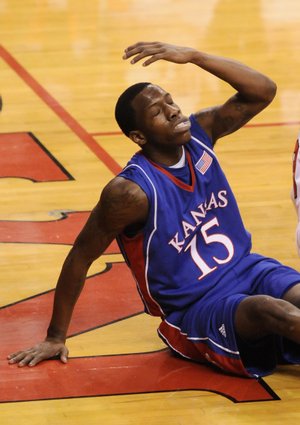 Lincoln, Neb. — With his team down three with 16 seconds remaining, Sek Henry said he was just trying to play it safe.

The inbounds play called for the pass to go to Ade Dagunduro under the basket.

“But the way the guy was defending me, when I was trying to pass the ball to him, I didn’t think it was open,” Henry said after Nebraska’s 68-62 loss to Kansas University on Wednesday. “Cookie (Miller) was my last option.”

Henry’s throw to the backcourt never made it to his teammate.

Instead, KU’s Sherron Collins, doing his best cornerback impression, leaped in the air to come down with the turnover, all but clinching the Jayhawks’ victory.

“I didn’t think he was going to get it, but he jumped up there and got it,” Henry said. “I was really frustrated at that pass after, because I know that was a big play. But there ain’t nothing I can do now about it.”

Though Henry had some regrets, NU coach Doc Sadler said he wasn’t going to criticize his team’s play against KU.

“How can you get mad? The mistakes they are making are effort,” Sadler said. “How many times did we dive on the floor? We dive on the floor and get a tie-up, and we don’t get any of them because the arrow goes the other way. At some point, it has to turn.”

Nebraska’s pressure defense forced 21 turnovers — 13 of those coming in the first 20 minutes.

NU also held KU center Cole Aldrich without a point or a rebound in his 11 first-half minutes.

“We liked the way we played ‘D’ on Aldrich and just defense period,” Henry said. “We were just on top of it.”

Some of that defense slipped in the second half when KU scored 39 points and out-rebounded NU, 26-9.

“We went after them, and they came back,” Sadler said. “They did what they are supposed to do.”

After shooting 50 percent in the first half, NU made just nine of 30 shots in the second half (30 percent).

“They are a team that really defends well,” Sadler said of KU. “They switched everything, and when they switched it, that takes away some of the easy stuff we get. I thought we got some decent looks in there, but we just didn’t finish the play.”

Dagunduro, a senior guard, scored a career-high 24 points on 10-for-16 shooting.

He said his team wasn’t intimidated by KU.

“We’re not scared of anybody,” Dagunduro said. “We feel like we can win any game we play in — we’re going to have a chance to beat any ballclub. We definitely wasn’t scared. They were battling, but we were battling too right down to the finish.”

Dagunduro, after being asked whether he thought Collins was fouled in the final minute, declined to comment — and for good reason. He was reprimanded by the Big 12 last week after questioning a no-call during his team’s 76-74 overtime loss to Oklahoma State.

“We definitely played our tails off,” Dagunduro said. “We deserved to win. We just didn’t.”

I like Doc Sadler — if you haven't, check out his weekly taped show on Fox Sports; it's worth your time — but his quote about the possession arrow is a joke. When a coach turns to making excuses for his team, you see why that team never makes it past the middle tier in their conference.

exactly, and it goes both ways. it is alternating possession. so its not like they gave us the ball 2 to 1 on every tie up. its equal and goes both ways. if he's mad about it and wants to call for making it like the NBA rule where its a jump ball thats one thing, but don't say "We dive on the floor and get a tie-up, and we don’t get any of them because the arrow goes the other way. At some point, it has to turn.” Thats ludacris to say.

TtownHawk, from hearing him previously, I don't think he was making an excuse as much as trying to say his team worked their arses off, and the breaks of the game didn't go their way. That's the way I see it, too. They did play hard enough to win, just not good enough down the stretch. This game should help prepare us for the quick defenses we will face in the next few weeks, beginning in Columbia.

Not the brightest comment for sure. But dust off a KU letter jacket for the official that sent Sherron to the line on his drive down the baseline. Wow! What a bad call. That block was clean. But a win is a win especially on the road.

steve4ku--- did you not see Collins head slap back. The foul wasn't called on the guy who blocked the shot. It was called on Anderson when Collins first started his shot. He gave him a slap to the head. Even the announcers admitted it was a foul after further review. And Sadler wasn't making excuses. He was just saying that it seemed every big jump ball went KUs way, which they did. Although I questions a couple of the jump ball calls:http://kansas.rivals.com/default.asp?type=3

Sherron was fouled before the clean block when he got clocked in the side of his head!

Sadler has them on the right track. They do all of the things that teams with mediorcre talent should do. They play defense, take charges and don't turnover the ball much.

“We deserved to win. We just didn’t.”riiiiightROCK CHALK

Gridiron, I see your point, but he made reference to the possession arrow. As Ttown pointed out, it's an alternating arrow that goes both ways. Say the refs favored one team, or say the big shots didn't fall, but don't blame it on something as equal as the possession arrow. I guess that was my point.

we were down something like, what, 15 points in the first half, and we come back to tie and subsequently take the lead in the second...and Nebraska deserves to win? Is he being serious? Nebraska had plenty of opportunities to try and put that game away, just like we have had opportunities to put games away in the past and haven't. That is not deserving to win. I don't know if anybody truly deserved to win, given the play, but if anyone deserved to win, it's definitely the fighting KU Jayhawks.Rock Chalk!

On another note, I feel like the article "::insert losing team:: lament loss" has been used many times by the LJW, and each time, I find myself thinking the article should instead be titled "::losing team:: expresses excuses"...or something of that nature if they are determined to keep the alliteration intact...Ok, that's all

Hail2olku.....I forgot about all of your players being rocket scientists. How many kids has Sherron fathered? What prison is JR Giddons in? Student athletes are student athletes, no matter where you are. Most of them aren't in school because they are scholars. NU was beaten by a better team. You beat a mediocre, over-achieving team, on the road. Big deal. Anderson's foul on Collins was real. Coulda been a no-call, but it wasn't. That's the way it goes. It was a critical point in the game and the emotions were high. Doc is an excellent coach and will build a nice program here. We'll never have KU's history or tradition in basketball. You'll never have ours in football. Even after last year's one-shot wonders. But we were in it to the end, and I'll bet you were crapping your pants.

To be clear, Sherron was clocked on the head before his shot, and that was a good call. Cookie Miller getting away with his antics AFTER the whistle was absolutely ridiculous- could only have happened in Nebraska. He should have been kicked out of the game and there should have been some technical shots.KU football- one shot wonders? well, it's already a two-shot, thanks.There is a big difference between fathering a kid (one, mind you)- a mistake plenty of kids seem to make, and being able to speak properly. I think it's a good win-- with how badly Kansas played and to still pull that out- way to go.

Husker - Minus your first three sentences, it was a good post. I didn't know it took brains to father children (it doesn't ). JR is in the NBA but not because of his brains, but his body. And this has WHAT to do with bad English? You could have said Dagunduro was speaking a foriegn language (euboncis) being from California and all or maybe not even comment on it. You could have said your team was kicking our a$$ the first half but you didn't. And, yes, I was very worried about losing this one. Your team (except for Cookie) played hard and well. Thanks for being a good sparring partner!

Grin... I like the comment by Doug Gottlieb after the officials ruled a jump ball tie up with Mario Little... after hemming a bit... he said "Miller is a punk".

I hate comments like "we deserved to win. We just didn't." If you blow a lead against a team - a team that isn't even playing that well - because you took horrible shots, got no rebounds, committed fouls at crucial moments and committed turnovers when the game was on the line, you most certainly do not deserve to win.

At that stage of the game? The tap on the head isn't a foul. Anyway, enough of that, I'm reasonably sure none of us were wearing stripes in Lincoln last night. So our opinions don't mean diddly.But Huskersrule, that is to big a softball not to smack. KU releases Gidddens so he can seek other opportunities at that basketball power in the State of New Mexico. As far as KU's football heritage compared to NU? Wins and losses it's pretty lopsided in favor of the corn feds. But rap sheets and arrests is where the Huskers really kick some butt. Andy Christensen charged with assault on a female. Kellen Huston assaults a fan leaving the field in Columbia. Ok, so it was a tiger fan but still... Thunder Collins murder. Christian Peter assault on a woman. And then there is Lawrence Phillips not enough key strokes in my fingers for his rap sheet. That's far from all of the Husker A-list, but it's a start.

Steveku you need to go back and look at the replay. If thats not a foul somethings wrong.

Huskerrules-I guess since our football team was just "one year wonders" in 2007, we dont stand a chance of beating your football team when they come to Lawrence next year, right? How does that feel to know our backup quarterback is better than your starting quarterback? Over the last five years our football team has outscored yours head to head 191-152. To call us "one year wonders" just shows how little you have paid attention the last five years, or how little you know about college football.