Kansas forward Xavier Henry elevates to the bucket past La Salle guard Kimmani Barrett during the first half, Saturday, Dec. 12, 2009 at the Sprint Center in Kansas City, Mo. 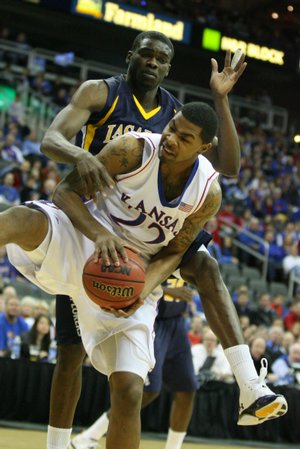 Kansas City, Mo. — If you didn’t know it already, you found out for certain on Saturday afternoon.

Xavier Henry is the best all-around player on Kansas University’s men’s basketball team and arguably the best freshman to play in the Big 12 Conference since Kevin Durant at Texas a couple of years ago.

Henry, a self-effacing 6-foot-6 forward from Oklahoma City, added the punctuation mark against a La Salle team that wasn’t as bad as the Jayhawks made it look during the 90-65 bashing at the Sprint Center.

Henry went into Saturday’s game leading the Jayhawks in scoring, in three-point goals and in steals. Nothing changed Saturday except for one thing — the cat is officially out of the bag.

By exploding for a career-high 31 points while making 10-of-15 shots, including four of five from beyond the arc, Henry skyrocketed into national prominence.

Curiously, before the season, teammates Cole Aldrich and Sherron Collins were named the Big 12’s preseason co-players of the year by league coaches, and Texas guard Avery Bradley was tapped as newcomer of the year.

Now it’s not a reach to say that Henry, if he stays healthy, has a legitimate shot to earn the conference player of the year award AND newcomer-of-the-year honors.

I know one thing. Henry has put me in a bind.

You see, I’ve compiled an All-Southpaw Team culled from all the KU basketball players I’ve seen perform over the last four decades, and right now all five slots are full.

Up front are Raef LaFrentz and Dave Robisch. The wings are Ron Kellogg and Keith Langford, and the point guard is Rex Walters. (Walters wasn’t really a point guard, but he could have played there if Adonis Jordan hadn’t been a teammate).

That’s a heckuva quintet of left-handed shooters. LaFrentz and Robisch are among the school’s all-time leading scorers. Kellogg was the best outside shooter I ever saw in a KU uniform, and Langford ranks sixth on KU’s all-time scoring list.

Walters doesn’t rank as high in scoring because he played his first two years at Northwestern, but the slick lefty could nail the three, and he possessed an uncanny knack of scooting through traffic to reach the basket.

Now along comes the left-handed Henry, and, even though he’ll probably play just one year for the Jayhawks, he may wind up deserving a spot anyway. Or I could, I guess, make him the sixth man.

Anyway, I watched Henry’s dad play for the Jayhawks back in the early ’80s, and Carl Henry’s game, while good, pales compared to his youngest son.

The elder Henry was two inches shorter, not as chiseled and rarely shot from beyond 17 feet. Perhaps Henry would have taken more long-range shots if the three-point goal had been in effect, but he was born three years too soon, so we’ll never know.

Carl Henry’s forte was the offensive rebound. His ability to come up with a loose ball inside and score “garbage” goals was sometimes jaw-dropping.

But Carl Henry played mostly inside, and Xavier Henry doesn’t, as evidenced by the fact he has only eight offensive rebounds in the Jayhawks’ nine games.

But if Xavier Henry had to play inside, I’m sure he could. He’s that good.

If present trends continue then Rex will be your 6th man. I saw all of them also, Robisch unbelievable, and Kellogg was ice.

Carl was 'coached' to not shoot near the unexistant arch as it didn't exist, as you say.

So he is saying X is better than a certain second overall pick in the draft from KSU? I may or may not agree with that at this point in the season.

If we're going strictly on stats, then Beasley would definitely be ahead of X at this point. Of course, KSU didn't have anywhere near as good a team as we do, so that may make X's stat line a little more impressive.

I love X, but Beasley was an incredibly dominant player. That's tough to say who is better. The supporting cast for X is definitely an improvement...

He's definitely on the same level as the Beas though.

Man, I just get more and more excited about this team.

I thought this was a list of KU lefties, what does Beasley have to do with that?

He came after Durant.... Durant beasley Xavier.... he said.... the most impressive players since Durant.

Maybe by "impressive", he means fun to watch. Durant was a very exciting player to watch, but with Beasley - while very dominant - you didn't really see many plays where your mouth just dropped to the floor in awe. X and Durant have that ability.

I agree with Lebowski.

Perhaps if Langford had had another season under RW things would have been different, but he certainly appeared to regress in his senior season.

It's one thing to put 31 on LaSalle versus John wall hanging 25 on North Carolina...

All you have to do is sit Langford & start X.

Langford was great & certainly a Jayhawk fave (2 final 4's) but you can't start six guys. Langford was phenomenal off the dribble, sliding through, hanging & hitting...

Does anyone else remember the "reporter" that called Xavier "ordinary" after watching him at Late Night?

Also, Roy haters will love this

Even if you love Roy I think you will be a little miffed.

I agree with KU1992 and with Lebowski. Can't fail to mention Beasley in a discussion of outstanding Big12 freshman. And I love Langford, but if anyone on the lefty-list should lose their leverage in the top 5, let it be him. He had an awesome KU career, and is one of my favorite Jayhawks, but he had his limitations, and if X continues to progress he will show that he is a better all-around player at the same position.

as much as I love Rex, I'd sit him before Keith just for the simple fact that Keith was here all four years.

I love "X" just as much as the next person; however. he's still a freshman, he's still learning the game, and he really hasn't had a defender make him put the ball on the floor. He scored 31 against La Salle. If we're comparing freshman, John Wall scored 25 against UConn... and has been putting up similar numbers all year long in addition to dishing the ball and causing turnovers. "X" is an awesome scorer, but I'm anxious for him to develop the rest of his game... and actually be tested.

was stallworth a lefty, guess not. no D but shot like Pistol Pete with limited support cast. OMG SC is reincarnation of Aubrey Nash, tough d, aggressive passer and drives the lane, except AN had no shot - passed to Bud.

Durant, Beasley, and Blake Griffin...how can anyone forget him? Because he stayed for a soph year?

He was still just as dominant.

Rush was not a lefty..

I have to agree with you armynut58. While I'll always hold a special place for Rex, I would definitely slide Keith over to the point a put X in there on the wing. Keith was smooth, patient, and clutch. Three pretty good qualities for your point man to have.