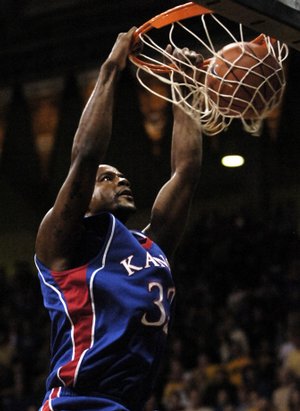 Darnell Jackson (32) throws down a dunk in this Feb. 2 file photo in Boulder, Colo. The Cleveland Cavaliers are expected to announce Jackson's three-year contract today.

So the 6-foot-8, 250-pound former KU power forward cell-phoned the Journal-World from the lobby of the Doral Arrowwood Resort Friday afternoon in Rye Brook, N.Y., as he prepared to sign a three-year guaranteed contract with the Cleveland Cavaliers.

"I want my teammates, coaches and all our fans to know I couldn't have done it without them," the Cavs' second-round draft pick said, asking the J-W to print his open letter to the fans.

"The coaches were my role models for four years. Coach Self ... I consider him my stepdad," Jackson added of sixth-year KU head coach Bill Self. "He always told me hard work would pay off. Coach (Kurtis) Townsend, (Joe) Dooley, (Danny) Manning taught me so much.

"The fans ... I felt them carrying me the whole year," Jackson added, referring to support during KU's 2007-08 national title season. "The student section would stand and clap before the game. It might have seemed to them that I was not listening, but I heard every word they said. If they could have played for the team and given their sweat, they would have, too."

Jackson wouldn't disclose monetary figures, but was willing to read the years "2008-09, 2009-10, 2010-11" from the legal document, sent to him by his agent at the site of the NBA Rookie Transition Program just outside of Manhattan.

Jackson was so giddy Friday he phoned his mom, Shawn, to have her offer her input in a three-way call to the J-W.

"I'm ecstatic. He's come so far. He deserves everything because he's worked for it," Shawn Jackson said from her home in Oklahoma City. "Eight years! He's played the game eight years, and now he's in the NBA.

"After he heard he was getting the guaranteed contract, he called coach Self. Coach Self cried, just like I did."

Self is the man who talked Jackson into persevering two years ago when he considered leaving school to be with his mom, who suffered serious injuries in a May 29, 2005 car wreck - a wreck responsible for the death of Jackson's grandmother, Evon.

"I'm as happy for Darnell as I've ever been for anybody. I'm as proud of Darnell as anybody I've ever coached," Self said Friday night. "He was tough enough to see it through.

"He has fought through adversity and kept a great attitude. He worked his tail off, got better, graduated and certainly has represented all of us well.

"I'm happy for all our guys. I talked to Sasha (Kaun, CSKA Moscow) today, and he's doing great."

Darrell Arthur and Brandon Rush were tapped in the first round of the 2008 NBA Draft; Mario Chalmers went in the second round. All signed guaranteed contracts shortly after the draft ended.

Kaun, also a second-round pick of the Cavaliers, will make over $1 million a year playing in Russia the next two seasons, with an option for a third season. Undrafted Russell Robinson recently signed to play for a team in Turkey.

Self now has coached nine power forwards/centers who advanced to the NBA: Arthur, Jackson, Wayne Simien and Julian Wright of KU; James Augustine, Robert Archibald, Brian Cook and Roger Powell of Illinois; and Michael Ruffin of Tulsa. The latest signee, Jackson, plans to be smart with his newfound riches.

"They are teaching us what you have to deal with in the NBA," Jackson said of lessons at NBA orientation. "They tell us we are not boys anymore. They talk about maintaining, saving money, making good decisions on investments."

Jackson plans to help his family members as much as he can.

"The only negative ... in looking for places to live, I thought about what it would be like if my grandma was still here, feeling the love and enjoying what's happening," Jackson said. "I know one thing - she's watching me right now, looking down on me now, and she's happy."

Note: Daniel Orton, the No. 22-rated prospect in the high school basketball Class of 2009, will visit KU for the Oct. 17 Late Night In the Phog, Rivals.com reports. The 6-10 center from Oklahoma City will visit Kentucky on Oct. 10.

Congratulations Darnell, best of luck to you!

Congrats to Darnell. No one that I've seen in watching 24 years of KU basketball deserved this more than he does.

Well done D Jack! All of the Jayhawk Nation is so very proud.

I know you're reading this Darnell, so congrats from a 42 year old KU fan. You guys keep me young!

Darnell,Congratulations, and thank you for your tremendous letter to the KU fans. I can only hope that your jersey is retired one day in the Phog (where it should be placed). Rock Chalk, super big guy from a KU alum, fan and now a new Cleveland Cavalier's fan.

I'd sign Darnell to a pro deal over the other two knuckleheads any time. Congrats to Cleveland. You got a steal.

Darnell,I have spoken with so many people the last two years especially about how your story needs to get out because it will inspire millions over the next many years. Your class, your drive, your integrity, your toughness and your tenderness are qualities that few people will ever achieve in the balance that you have. In the world of the NBA, Jayhawks across the land will always know how you represented all of us on and off the court.May your blessings abound and in the words of your mentor, may they multiply many times over. You are truly one of the greatest Jayhawks ever!Congratulations and thank you for all you did and how you let all of us into your life, trusting us enough to lean on us when you truly needed it.

CONGRATS DARNELL. YOU HAVE REPRESENTED THE KU NATION EXTREMELY WELL. Best of luck to you always. Thanks for playing at KU!

you are an idiot, njjayhawks. The Chalmers-Arthur thing was breaking news because it happened during the DAYTIME and wasn't expected. Jackson, however, was long-expected to sign this contract...plus, it was posted overnight, hence the no breaking news...moron...

Thanks for being proud of your school and being thankful for the opportunities it helped provide. You represent the values of Kansans very well Mr. Djack.

Congrats to Darnell and thank you so much for representing KU with class!

Darnell, I am so happy for you. You are truly one of my favorite players. I hope you do great in the NBA, it's so great to see you come this far! Congrats again, and come visit Lawrence.

I hope Darnell reads these post's. WE, Jayhawk fans, will always love you pal. YOU are the guy who will always be thought of as a man with a mission, a man with a heart, a man with our hearts. God Bless you. Thanks for 4 years of a true class act.

I never like to say a particular student athlete is my favorite. It seems unfair to all the other players that have done so much for the university. But, Darnell got me to break that self imposed rule many times over the past 4 years. Darnell Jackson has been my favorite player, and I don't know if it's possible to be any prouder of him.

Congrats Darnell. I have a new favorite NBA team now. I can't wait for the Cav's to begin the season and with the year they had last season, we will get to see you on TV many times. You are a super role model for my foster son and a great example of how a man should live his life. Thank you for your years in the crimson and blue, I loved every minute of it.....I'm sure you know the saying."Once a Jayhawk~ Always a Jayhawk!" Rock-Chalk D-Block Go Cavs!

A versatile, tough player to join LeBron in Cleveland. And he's been playing basketball only 8yrs! Kind of like Sasha's story--also a clue that Cleveland sees a big "upside" to DJack. He certainly has not plateaued by any means. You go, Darnell! You deserve all the goodness!

Nobody deserves this more than Darnell. Congrats DJack. You will be missed! I will be rooting for you in the NBA.