24 — Points by which KU outscored the Huskies in the paint

34 — Rebounds by all the Jayhawks 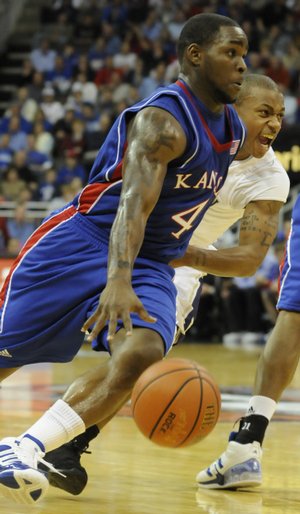 Instead, the Huskies were quick to say the Kansas University defense was the biggest reason for their misfires.

“That’s what a good defensive team does — they force you into bad shots, and they force you into a low shooting percentage,” UW forward Jon Brockman said after his team’s 73-54 loss to Kansas on Monday at the Sprint Center. “Hats off to them. They did a great job defensively.”

Coming in, Washington had made 45 percent of its shots in its first three games.

After going just 9-for-38 in the first half (23.7 percent) against KU, the Huskies ended the game by making just 29 percent of their field-goal attempts.

“We knew going into the game they were holding teams below 30 percent, and I see why now,” Washington coach Lorenzo Romar said. “They did a good job in their man defense, but for the most part, they played the zone. We didn’t handle it very well because we didn’t pass the ball like we should.”

Also struggling offensively was Brockman, the preseason Pac-10 player of the year.

Though he was able to grab 18 rebounds, he made just two of nine shots and finished with seven points. Brockman scored at least 10 points in every game last season.

“They really sat in that zone and kept those two big guys down there in the paint,” Brockman said. “It makes it tough to get work done down there. They did a great job.”

“When you have your feet set, and it’s not a quick shot, you will shoot a higher percentage,” Romar said. “I just don’t think we were taking quality shots. I think we were rushing shots.”

Washington wasn’t able to cut into KU’s lead despite out-rebounding the Jayhawks, 43-34.

Part of the reason was a high number of blocked shots for KU. The Jayhawks finished with 10 swats, with six coming from Cole Aldrich and three others credited to Markieff Morris.

“They made it difficult for us to get anything easy,” Romar said. “We’ll see what happens (today), but I thought (Monday) they kind of came together.”

Brockman came away impressed with the young Jayhawks.

“I think it gives us a great idea of what a high-level basketball team plays like,” Brockman added. “They were just a great example of what a good Div. I, winning basketball program does.”

i think some need to remember not only how well Aldrich played, but also how well some of our boys seem to have already adapted to potent coaching. Taylor is already showing control. They opened with great free throw shooting off fouls incurred driving the lane. There appeared to be greater focus on rebounding on both ends, as well as properly-instructed blocking-out underneath. And let's face it, the refs were quick to call many a-charging fouls early(seemingly, to test their metal, well . . .). This was a good test for us people. (oh yeah, i'm halfway through the first half, snicker)

alright so not-so-much blocking out as i had assumed, yet their defense is intense, in-your-face, constant pressure-stylee. Does anyone else truly grasp what Taylor will bring to this team? And as Collins' wingman, this Maverick has unlimited potential (thank the good for the highest-quality coaching staff, and the relentless practice and preaching the players so smartly adhere to, trust m'man, y'all doin that right thing). ahem, half time

Is anyone else seeing the potential with this team? Yes, we have our youthful flaws. Yes, we're young and have the enticing mal-taught practice of thriving on spring-like adrenaline. And yes again, we are young, both as a team and as athletes. Now let's quit that bewildering be-railment, and stuff that under the rug. We're actually doing something here.This team has an incredible future ahead of it. There are multiple offensive and defensive weapons available, whom only seem to acquire more honed skills by the day. This team, at this time, is starting to show signs of becoming a unit, something within this collegiate atmosphere within which to reckon. Morningstar to Reed for a quick, fastbreak lay-up (that went in). The crowd blankets Aldrich in the loving warmth of a family proud of their kin. You're family, brother, and the love is warm.

Silly mistakes. We're gettin a bit too loose. Nice to know that our well-timed substitutions provide high-quality depth to our interchangeable bench. Again, it is of my contention that the coming together of this, our unit, is of our ultimate goal. yes, we want them to develop as players, but to win games, we must act as one. Throughout this match with Washington, there have been several significant signs that this becoming unit is indeed growing together. Sherron, Sherron, Sherron. Bud, keep on keepin' on. As the undercover brother in Chi-town, i'm lettin ya know, Big 10 country is having a WHOLE lotta interest in Big 12 because of you. They're proud of you, and you too Mario. All knows whats gonna happen when u come back, and we're all very excited. The City says thank you, men.

nope. Nobody else sees it.I think your an idiot savant.Please tell us what else you see, cuz the rest of us are lost.

Offensive rebounds? Would someone go back and chart the rebounding for this game? ESPN reminded us only about 20 times that the offensive rebounding in the first half was 17 - 1 Washington. But the CBS Sportsline halftime box score had Washington's OR's at about 12, and now lists the final box score number at 18. What number is correct? And where is the Journal-World's box score?Bobby Knight had his ups and downs but overall I thought he was a really nice change, a breath of caustic fresh air.Lots of potential for this team. They've got a long way to go, but they'll keep getting better under good coaching. It will be critical for Cole to stay out of foul trouble and stay on the floor.

crazydave: Yeah, I thought that was interesting as well. When I looked at the halftime box score from ESPN it was 14, but that was unofficial at the time. It didn't matter, when you have that many blocks and they throw up that many "Bricks", they will get offensive rebounds. 14, 17, or whatever, but that was still an insane number. The good thing is the Jayhawks cleaned up that department during the second half so I'm not too worried about it.

Can someone please tell me where Tyrone Appleton is, I know he was one of the big recruits but I haven't seen or heard anything about him. Is he hurt or something?

Hey LJW, I know you were going to keep track of the Big XII vs. Pac 10 record this year without me reminding you, but I'm just saying. Have there been any other games already this year or is The XII only 1-0? I should research this myself, but I'm late for work as it is...

I've said many a times that people around the country have been underestimating this team......even KU fans. I think that they have shown that they are going to be making an impact this year. It's still early and they are still making mistakes like a young team will but there are flashes of greatness that have been shown as well. I think tonight will be another good test. I can't wait to see what happens. Rock Chalk!!!!!!!

babygirl2701 - Appleton was not a "big recruit" in terms of ability.. Thomas Robinson, Morris twins, are what you call big recruits. Now size, yes. You could say he's a "big" recruit. Appleton is having to overcome playing better then those other guys you saw on the TV yesterday. Appleton is a guy who has one more year of experience to help these young "big recruits" out. He'll be fine.

Appleton also had the early season injury which put him behind in practice. He's still catching up. Everybody knows what happened to Reed last year when he kept having those ankle injuries. Anytime you have an early season injury, unless the coach has complete faith in you......a player is going to have a tough time coming back and finding a way into the rotation. Appleton is in that "No Mans Land" area right now. It's a shame, but you can't control injuries nor the timing of them. Sometimes it's good timing other times it's terrible timing.

KGphoto my friend and I said the exact same thing the other night.

Thank You for answering my question about Appleton, I really appreciate it.

Appleton played and has played mop up minutes in atleast 2 of the games.It looks as if he's way down the depth chart.He doesnt shoot well enough to play the 2 so he can only play the 1 and he has 3 guys ahead of him in Collins,Taylor,and Reed.Same goes with Releford I guess at the 2 or 3.I figured he would possibly start or atleast get major minutes but thats not the case,and once Mario is healthy,it doesnt help his chances either.Anyone else know anything,or have any input?