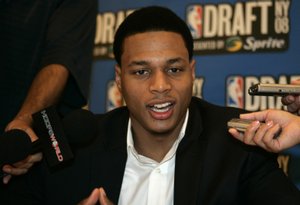 During the course of the past 3 years this young man has become more poised and confident. Best of success!

We, KU alumni, can be proud. They weren't only good players, they were basically good kids. Hope they have all the best.

i'm fairly certain that DA doesn't have a broken leg - he has worked out for teams recently.the kidney thing has some traction - he has complained about his back recently and there was a 5 - 8 day stretch this month where he didn't show up for workouts and nobody could get a hold of him.does anybody else know anything more about this?

JayViking,I agree, its sad that this group has moved on. I felt the same way when the Pierce, Pollard, LaFrentz, Vaughn, Haase group broke up in 97. I felt the same when the Simien, Miles, Lee, Langford group left in 05. College basketball is like that. You get groups that come in together, grow together, win together and then they all leave together (or mostly together). I'm sure in another few years, we will look back at the Morris twins, Tyshawn Taylor, Travis Releford and Quintrell Thomas as they have all departed and reminisce fondly about their time in the Fieldhouse.

DA commented somewhere yesterday (?) that the "back problem" was just the result of repeatedly cramming a big body into a little airplane seat.I guess that could be damage control, but he has had a full workout schedule this week at least.

Justanotherfan, is relating the philosophy "Reloading, not rebuilding"

anyone if know if there are any truths to the injury rumors about DA (broken leg/kidney problems)?

My only problem with the NBA is that I don't have a home team to root for (Chiefs, Royals) and so I just end up rooting for whatever teams have a KU player. The Celtics winning the title and giving Pierce and Pollard a ring was pretty much the most excited I have ever been about an NBA game...ever. Who knows Nocalijayhawk, maybe I'll be rooting for the Kings with you next season.

Is Chalmers getting traded for Jackson? Saw that on the trades on espn.

I'm officially ill. Rush at 13 was real. Arthur and Chalmers between 24 and 30 make me sick. This is brutal for Arthur and for Chalmers. The lesson? The NBA prefers size, regardless of position.It is still good to be a Jayhawk, but it is not good to be Arthur, or Chalmers right now.

CELTIC SUCCESS WITH DEFENSE IMPROVES KU PLAYERS POSITION IN DRAFTWinners are emulated. KU won an NCAA ring with defense. But, the GMs said, that was college ball. Yet now Boston has won an NBA ring with defense, so GMs and coaches are suddenly hot to emulate the Celtics. But what rookies can already play defense? So many college coaches talk about playing D, but almost none of them make it a litmus test to get minutes; they have to keep the blue chippers stroked and most of the blue chippers don't want to pay the price to get their butts down and slide for 40 minutes. Howland just teaches them to slap.Roy's boys play enough D to keep up the pace, but they aren't indoctrinated to win with defense. J Thompson 2.0? He's still playing his father's thug ball; NBA players take guys who try to play Georgetown defense in the L and break their noses until they stop.Huggo-Muggo defense? Same deal. Face rearrangement city by the perma ballers of the NBA.Coach K? He just teachers players how to be three point pussies and then trip people when ever they get behind.Bob Knight could coach defense, but he quit.Right now, there's only one college campus to one stop shop for defense; that's Lawrence on the Kaw.Guys who played for Bill Self at KU play manly defense, or they don't play. They are taught the fundamentals. They are taught the tricks. They are taught how to out rough anybody who tries to maul them. They are taught the Howland hack'n'slap. Their manhoods have been questioned for lack of defensive commitment. They have collected splinters for not playing close enough to inhale atomic balm fumes from their opponents jocks. They are taught to defend everywhere on the court every way there is to defend. They don't just try to stop teams from scoring, they try to wreak havoc.Allen Fieldhouse is the home of the Institute for Advanced Defensive Studies. You want NBA defense now, not later? Draft one of those guys with weird bird decal in the rear window of their rigs.Note: every NBA coach hates teaching millionaires to play team defense. Defense is work. Millionaires don't work--they play. A few coaches, like LB, and now Doc Rivers, who really want to win go ahead and perform the coaching equivalent of a root canal without anesthesia on these millionaires, because they know its the only way.Others like Phil Jackson and Pat Riley refuse to do the procedure themselves, they just limit themselves to picking up old vets who already know how.Coach Self is kind of like a vendor at a ball game with something everybody loves, like frosty malt on the Fourth of July: Hey, get your defensive players here, get'em while they last, hey, get your defensive players before they're gone!Its great to be a Jayhawk right now.

I have the same challenge as you truefan...It was good to see Celtics with 3 all-stars won their first NBA ring. That Garnett was such a factor defensively. Pierce + Allen, offensively.I thought Pierce was the best player we had during his college career, but I didn't think he would be such a dominant player. We knew he could shoot given a little daylight, but his will to go to the basket was not a consistent skill he showed during his college days. He definitely surpassed everyone's expectations. Way to go Pierce.

J. R. Gidden taken #30? Ainge prefers Gidden to Chris Douglas Roberts? What is wrong with this picture? I thought you were the smartest guy in the NBA after the ring. Was it a fluke?Chris Douglas Roberts 40?CDR was significantly better than Mario and he would eat Gidden alive.

As great as Mario was in the college game, surely most of us knew he wasn't a first round NBA pick without another year of college ball. We tried our hardest to let him know for five weeks to not get sucked into the hype with our posts, right? I hope so... Its too bad, but its logical. He's not a first rounder. He'll be fine, but boy he just wasted a year of incredible national hype to sit on the bench with a one year contract. Best of luck Mario, you're a classy Jayhawk. Rock Chalk.

Does anyone know anything about Darrels kidney issue....that kinda threw me for a loop but something obviously wasn't being disclosed with him falling this far!

Patrick Ewing Jr. is now better than Darnell Jackson, or Sasha Kaun.Are they going to start picking Wesley Snipes before Dblock and Kaun?

I am presently applying salt and pepper to my hat and cutting it into bite sized portions. Arthur must really have some baggage we do not know about. Teams interest in Chalmers seems to have been a faint while the teams zeroed in on foreign bigs.

WTF!! KU bias aside...these teams are picking some rediculous dumb picks. Noone will even know who half of these people are in 2 years.

but you're looking at spots on the floor with the NBA game. CDR will get eaten alive at his position. Giddens will be a great NBA 3 man.

As much as I want to say "I told you so" to certain KU players, who really cares, they're still in the league and I wish them the best. As far as Chalmers... WOW. You get to play with D-Wade and Beasley. The need a point guard, way to go. And D. Arthur looks like he'll be playing in Houston at this point? Boy, that kidney thing has got to be pissing him off right now. Apparent bullcrud? Who knows. Looks like it was all a random red herring, though, from what I've read.Rush and T.J. Ford in the backcourt together? Mwahahahaha! Now THAT should be entertaining to watch!Hope Julian gets more playing time next year, too. Man, the league is looking pretty crimson and blue these days.