Bill Self, still a Jayhawk

Coach Bill Self has announced that he plans on staying at the University of Kansas.

KU coach Bill Self met with the media Thursday afternoon, flanked by athletic director Lew Perkins and Chancellor Robert Hemenway, to announce his intentions to remain as the Jayhawks' head coach for years to come. 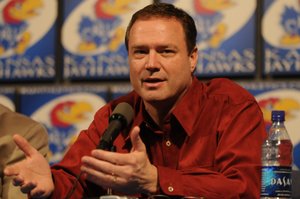 Kansas University basketball coach Bill Self, shown Thursday at a news conference at KU, has no plans to leave after winning the National Championship on Monday.

In the end, for Kansas University basketball coach Bill Self, it came down to a simple decision that there is no place like his new home.

Self rejected a Wednesday night offer from Mike Holder, the athletic director of his alma mater, Oklahoma State, to become its basketball coach.

"Home called, and I love home, but this is home now," Self said at a 4:30 p.m. news conference Thursday.

Self, who coached the Jayhawks to the national title in his fifth year on the job, said he informed OSU of his decision shortly after noon on Thursday.

Self and athletic director Lew Perkins agreed in principal to a new multiyear contract, the details of which were not revealed. Perkins said he expects the deal to be done and signed by Self within two weeks.

KU chancellor Robert Hemenway said that Self will remain the school's men's basketball coach "for a long time to come. He has represented this university with class and grace since he first stepped on campus."

Hemenway called Self, "exactly the right person for Kansas basketball."

Echoed Perkins: "I can't think of another coach I'd rather be sitting next to."

Self, 45, has an .816 winning percentage in five seasons as coach of Kansas. Before that, he served as head basketball coach at Illinois, Tulsa and Oral Roberts.

Self lives in Lawrence with wife Cindy and the couple's children, Lauren and Tyler.

"When your family loves it here, first and foremost, you love the people you work with on a daily basis, love the direction of the program, love the positive steps taken since I have been here to build a foundation that could springboard you to the future," the decision to stay became an easy one, Self indicated.

Thrilled to have Coach Self and his family.I've been as critical of Roy as anybody, but after beating him in the Final Four and then seeing him behind KU's bench rooting for the Jayhawks with a Jayhawk on his shirt I just can't criticize him anymore.Turn the page. It's a new chapter in KU basketball history.

I agree. I've done my fair share of Roy bashing but really what it all comes down to is that we all felt betrayed. UNC winning the championship in 2005 really added fuel to the fire. I think that lots of KU fans sort of felt like that should have been OUR championship.I for one have to say that Roy Williams is a class act and I'm very proud to have had him as our coach for 15 years.I think it spoke great volumes about his character by supporting us and wearing the Jayhawk sticker (I heard that Ryan Robertson gave this to him btw).

Thank you for doing what one classless individual wouldn't! It is great to have you in your new home. It is a shame we are congratulating you for staying, when the focus should be on what you just accomplished. One hellofa year Coach Self. Thank you for that. Now maybe you can enjoy it yourself!

I agree...all the Roy haters just need to STOP!!!!!!!GET THE F*CK OVER IT!!!!!!!Roy showed this weekend just how classy of a person he IS!!!! To wear a BIG Jayhawk sticker right smack-dab in the middle of your chest on national TV after taking an ass-whoopin' from KU...that took guts, my fellow KU fans.From here on out, I WILL root for Roy (and UNC) as long as they are not playing us.

Roy's legacy at KU is undeniably a great chapter in our history, but something to ponder.....When Roy won the Championship at UNC he did it with a team he for the most part inherited, just like Bill when he lost 2 first round games. Now that enough time has passed that both programs has players that are totally their own, we punished UNC and Bill won it all. I believe that speaks volumes about Bill's recruiting and our future !!Rock Chalk ChampionHawk !!!!!

The team that lost to Bradley was Coach Self's - but they were freshman and sophomores. Had they not played so far above expectations for the second half of that year to get a 4 seed, no one would have been that surprised to see that team lose early. I prefer to think of the Big XII titles (season and tourney) that they brought us that year.

This should leave no doubt about the bright future of the basketball program here at KU. I was pretty angry with OSU concerning their timing, but it sounds like they handled this thing with a lot of class. I don't doubt they will find a fine coach and return to being a credit to our conference.

It took me awhile to get over Roy leaving BUT as the old saying goes sometimes things work out for the best.Roy leaves and we get another great coach who has already done something Roy never did here...win a NC.

One last comment from me on Coach Williams, hopefully forever:When I saw him sitting at the championship game with that Jayhawk on his shirt, I realized any ill feelings I might have had over his departure were rooted against UNC for stealing him home, not against the Coach. Now, I got my wish and we played and defeated UNC in a Final 4 game. All is vindicated. We beat UNC. It did not matter who was coaching them, WE BEAT UNC.I don't have any bad feeling for Coach Williams. Maybe I never did, really. It was just against them stealing him away.That's it for me. It's over. Bitterness ... RIP.Roy ... come to my house for dinner anytime. Come to Lawrence to support KU anytime. I'll cheer for your legacy, and KU's proud history under your guideance.Rock Chalk.

Bill Self took "his" team and won the National Championship."His" in the sense of everyone of these players, minus Jeremy Case were his recruits. Roy Williams has never won a National Championship with "his" own players. 2005 UNC was mostly comprised of Dougherty's recruits.Roy is an outstanding coach and a great guy. BUT, Bill is a better a coach and a truly outstanding individual. We all should feel blessed. So, thank you Bill Self for enduring all this slack the past 5 years and now all the focus should be on you and your team's accomplishments and the future of Kansas Basketball.Thank you Kansas Jayhawks for an unbelievable season. Rock Chalk!By the way, what an awesome Sports Illustrated cover.