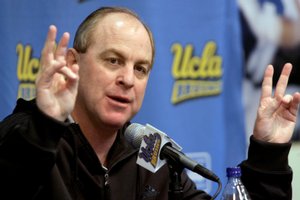 Even on a list of coaches that includes industry greats Roy Williams, John Calipari and, of course, Kansas University's Bill Self, the man of the hour at this Final Four seems to be UCLA coach Ben Howland.

"It's mind-boggling (what he's done)," Williams said of Howland's leading the Bruins to a third straight Final Four appearance. "Our staff was talking on the bus on the way back home about how this is our fourth trip in the last seven years, and I said, 'Guys, this is hard to do.' But Ben Howland has gone to three in a row. I don't have enough vocabulary and adjectives to describe it."

No problem there. Calipari was happy to help.

"I just respect what Ben has done," said Memphis coach Calipari, who will lead his Tigers against UCLA at 5:07 p.m. today. "The thing they've been missing is the Bill Walton, the center, Kareem, and they got one now, Kevin Love. Kevin Love gives them the center they want to have, (point guard Darren) Collison is as good as it gets, and then you have all the rest of the guys chipping in. I'm impressed with their team."

And then there's first-time Final Four participant Self, who broke down the Final Four barrier in his fifth trip to the Elite Eight after losing to Howland's Bruins in last season's regional final. Always quick with a kind word for Howland and his program, Self continually praised the Bruins before and after last season's meeting.

But as the fifth-year UCLA coach's colleagues sang his praises, Howland made sure to emphasize exactly where he thought he stood in the rich history of UCLA basketball, which currently is enjoying its longest stretch of consecutive Final Four appearances since legendary coach John Wooden graced the sidelines in the late 1970s.

"My relationship with Coach (Wooden) obviously has been special for me," Howland said. "Just to get the opportunity to get to know him and be a part of his program and be the actual caretaker at this time of John Wooden's UCLA program, because that's what it is, it's his program. I'm proud of what we've done in the last three years."

Howland came to UCLA after a highly successful four-year run at Pittsburgh in which he was named both Big East and National Coach of the Year in 2002. Prior to that, Howland spent five years at Northern Arizona, leading the Lumberjacks to their first ever NCAA Tournament bid in 1998.

A native of Lebanon, Ore., the West Coast guy who has made his living preaching a tough, defensive-minded brand of basketball, has become one of the most respected - if not feared - coaches in the game. Since the moment he arrived at UCLA, Howland brought the kind of toughness made famous in the Big East to Hollywood. Although he admitted that many on the West Coast might not have believed he was the right man at the time, Howland knew he was ready to coach in Los Angeles because of the time he spent in the Big East.

"(For Pittsburgh) to hire some yokel from way out west that no one back east had ever heard of was probably unexpected," Howland said. "And, had it not been for the opening at UCLA, I'd probably still be at Pitt had they still wanted me. That opportunity allowed me to coach at the highest level. No league is better than the Big East year in year out, and I got to coach against some legendary coaches like (Syracuse's, Jim) Boeheim and (Connecticut's, Jim) Calhoun, and that was a great challenge each year."

Today, Howland's challenges have grown to epic proportions. After finally proving that he belonged among the game's elite by taking a young and talented UCLA team to the 2006 national championship game, Howland's next test came in the form of getting the Bruins back into the Final Four. No problem. Despite being a No. 2 seed in the West, Howland and UCLA rolled through their bracket, ultimately dispatching KU in a hard-fought regional final. However, just as they had done the year before, the Bruins lost to Florida, this time in the national semifinals.

This season, as the top seed in the West, Howland's club might be poised to go one step higher. The Bruins return three starters from last year's Final Four squad and have added Love, a unanimous first-team All-American, to the mix, giving Howland his deepest and most dangerous club yet. In all, Howland's bench includes six players who have been to at least one Final Four.