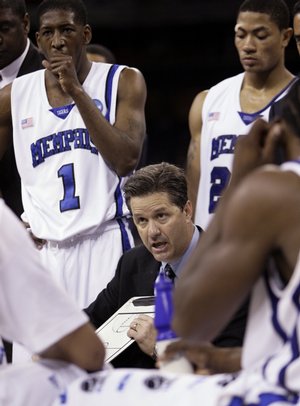 Memphis coach John Calipari talks with his team during a timeout in the second half of the South Regional final against Texas.

Although most coaches will tell you that they don't listen to critics, Memphis coach John Calipari admits that he has heard just about every negative thing uttered about his ballclub this season.

From the imminent doom that the Tigers' free-throw-shooting woes were sure to bring to the problems that the team's cupcake conference schedule would create in March, many pundits across the country shared one thought about the team that lost just once during the regular season: Memphis was not going to reach the Final Four.

But Calipari and the Tigers are still standing. And, looking back, the eight-year veteran of the Memphis sidelines said he was thankful for everything the nay-sayers did to keep his players focused on the task at hand.

"In this information era, (our players) hear and see everything," Calipari said. "The majority of the pundits were picking us to lose every game we played. I laugh about it. And if you want to continue to help us, keep doing it. But I'm not in the locker room talking in those terms. I'm talking about, 'This is our time.' They play on a dream team, and we want to keep this going."

Calipari took over the Memphis program in 2000, after a memorable eight-year run at the University of Massachusetts and a largely forgettable three-year stint with the NBA's New Jersey Nets. Almost immediately, his winning ways surfaced as the Tigers reached the Final Four of the NIT during his first season and won the event the following year. In 2004, Calipari took the Tigers to the Big Dance, where they have wrapped up their season in four of the past five years, including three straight appearances in the Elite Eight.

After coming up short in both 2006 and 2007, Calipari - like Kansas University coach Bill Self - finally erased the Elite Eight jinx that had haunted him at Memphis. Behind a stellar lineup that includes NBA prospects Derrick Rose, Joey Dorsey, Chris Douglas-Roberts, Robert Dozier, Antonio Anderson and Shawn Taggart, the Tigers rolled through the South regional, reaching the Final Four with an average margin of victory of nearly 16 points per game. That includes back-to-back 18-point victories over Michigan State in the Sweet 16 and Texas in the Elite Eight.

"The way we played (last) weekend, we deserve to be in the Final Four," Calipari said. "We were tough-minded, we played well defensively and we executed."

In addition, they opened some eyes in the process.

Memphis will face UCLA in the first of two national semifinals today. Although coach Ben Howland's team boasts the most big-game experience of any of the teams in San Antonio, the Bruins aren't expecting an easy time against Memphis.

"They could easily be 38-0," Howland said of the 37-1 Tigers. "We all saw that the Tennessee game could've gone either way. It's going to be an incredible challenge to try to defend them and to try and score on them because of their athletic ability."

Perhaps taking a page out of the what-not-to-do-prior-to-playing-Memphis handbook, Howland continued to praise Calipari's team.

"He reminds me of Jason Kidd," said Howland, comparing Memphis freshman Rose to the perennial NBA All-Star. "He has a Jason Kidd-type body, he's so strong and physical. He defends like Kidd, and he's a much better shooter at the same stage. I can't think of much higher praise to give a player."

Regardless of who does what or which teams are weak in which areas, Memphis has made it. The Tigers have reached college basketball's promised land. And, if Calipari has anything to say about it, they're not done winning just yet.

"The greatest thing for this team was they were on a mission, and they still are," Calipari said. "I like their focus. I like their concentration and intensity level. People that have watched (them) play, especially last weekend, were stunned at how hard they played and how unselfish they played and with (how) much intelligence they played. They have done it all year. That's why our record is what it is."