Fans have ‘Big Dance’ steps of own

This Saturday, many KU fans will be donning the Crimson and Blue. Face paint will also be in full force, but those signs of support are temporary - we found a couple of Lawrence residents who have made their Jayhawk pride much more permanent. 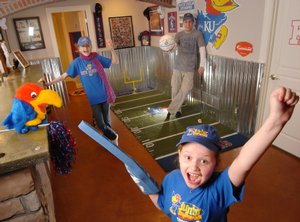 Members of the Sullivan family of Lawrence take great pride in their downstairs room that is a tribute to everything Jayhawk. From left are Bailey, 11, her father, Dan Sullivan, and sister Reagan, 8.

Do you know any KU super-fans?

Do you bleed blue and crimson? We want your Final Four fan photos and stories.

There isn't one Kansas University basketball fan who can precisely predict or control the outcome of Saturday's Final Four match-up against North Carolina. But that doesn't stop every fanatical fan decked out in crimson and blue from trying.

Basketball fans' numerous superstitions seem to be as old as the sports they surround and have become deeply ingrained in the world of athletics.

Whether it's sitting on the same place on the sofa, game after game - or a certain brand of chips, opened the same way, poured into the same "lucky" bowl, round after round - Lawrence psychologist Marciana Vequist tells us that deep down we are all creatures of habit.

"When something happens that we want to happen, we try to figure out what was the connection between our behavior and that outcome and so, I think, it's just kind of a natural thing that we do," she said.

Lawrence resident Todd Chapple has figured it out. After a tour of the Jayhawk lounge in his home, he discussed the importance of being in the right place come game time.

"We have a group of people that come over every week and we even have people that have their special seats," he said. "We have a guy that sits right here. One time he even moved my 9-year-old daughter out of the seat because that's his lucky seat."

Chapple and other KU enthusiasts display natural fan reactions when their superstitious habits are followed up by a negative outcome. They simply ignore the result and carry on with the others, no matter how extreme they may be.

"We all like to think they help, of course, but then we have a few years which I won't mention, like Bucknell and Bradley, that they don't work," Chapple said. '': but Sasha Kaun is a fan favorite around the lounge. My daughter even named our dog two years ago Sasha. Whenever he gets a dunk or a basket, everyone screams out 'white Russian!'"

Chapple is not alone.

For KU graduate Pat Sullivan, it's his house, his rules and he can change them on his Jayhawk putting green anytime he feels the need.

The Jayhawks tip off against North Carolina shortly before 8 p.m. Saturday.

Rest assured that KU players, coaches and fans will join Vequist, Sullivan and Chapple with their own superstitious behaviors on Saturday - all while hoping that maybe, just maybe, their 20-year-old hat or lucky socks will ensure KU plays in Monday's championship game.

6News will have special live coverage Saturday night following the Kansas-North Carolina game. We will have live reports from downtown Lawrence, highlights and analysis of the game, as well as postgame coverage from San Antonio.

i won't be doing anything superstitious but i will be decked out in crimson and blue in a sports bar full of carolina blue with all my friends in charlotte. haha winning his game will be sweet so i don't have to call all of em to tell em because they will all be right there with me. haha

I won't be able to watch. Too much stress.

"few years which I won't mention, like Bucknell and Bradley,"fantasic job not mentioning

Hawk - did you order your "Kansas...Birthplace of North Carolina Basketball" from Joe College yet? I can't wait to get questions from people all day about it.

"White Russian." Wow shocker that their favorite player is the one white guy that gets PT. At least they aren't masking why.

A couple of years ago, a work friend of mine sent Coach Self a tie with a note that said "no KU coach has ever lost wearing this tie". We saw that tie on Coach Self several times. I can't remember if we ever lost when he wore it, though.I do have a "lucky" KU shirt this year. I've worn it every game since the OSU game, and it's worked, so far. I also have a small 7" KU bball that I hold during every game. It's a pacifier, frustration pounder, etc. I wouldn't watch a game without it.I have friends that are KU alumni and big fans that refuse to watch any games on TV because they perceive that KU loses when they watch. So, yeah, I guess I'm one of the many superstitious ones. Somehow, somewhere, I believe that this all helps ... as silly as that might be.Rock Chalk Jayhawk ... Beat UNC!!!

What kind of a fan will not watch a game on TV. Now, if that means they're at the game, that's another story. But if not, I'd just call them idiots.

Do any of you ever sit there watching one game on tv and then see a score of another game scroll across the bottom of the screen and the team you want to win is way ahead, so you turn to that game and start watching it only to have the team you don't want to win go on some kind of 20 to 2 run and end up winning? I hate when that happens. Seems to happen every time I do that. I know what you are going to say, just don't start watching it.

dek9219 - something tells me I have done the same thing at the same time you have. I have found the most logical and effective way to counter this phenomenon is to quickly change the channel back.

okjhok - The article was about superstitions. Maybe you didn't get that. Afterall, down thar in O-K-L-A-H-O-M-A, et's probly nown as sue-par-stay-shuns. Git it now?Or maybe you just get off calling others idiots because of their idiosyncrasies.