Several KU fans waiting for 'Late Night in the Phog' to begin talk about why they love the Jayhawks.

'Late Night in the Phog' officially started the 2007-2008 KU basketball season this evening in front of thousands of Jayhawk fans eagerly anticipating the 'Hawks to hit the hardwood.

In another fun installment of 'Late Night in the Phog' hosted at Allen Fieldhouse, the red team topped the blue team during the scrimmage portion of the evening's events. 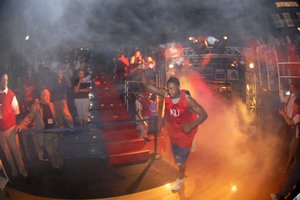 Football sure didn't feel like the slighted stepchild Friday night when John Riggins charmed the Allen Fieldhouse crowd, when Mark Mangino walked to center court and triggered a noise bomb, when, earlier, David Jaynes and a number of other former KU players gathered at Alvamar Country Club to wish ex-coach Don Fambrough, the program's No. 1 fan, a happy 85th birthday.

Football won't feel like the "other" sport this morning, starting at 9:15, when the public is invited to join Fambrough and former players for what Jaynes promises will be a memorable gathering under the Campanile. Be there or you'll wish you had been, Jaynes advises.

Everybody loves a winner, and the football team will try to move to 6-0 today against Baylor and cure the hangover from last season's collapse. KU led by 18 with less than 10 minutes remaining in the game in Waco, Texas.

Mangino, after praising the crowd and coaches Bill Self and Bonnie Henrickson, in his parting comments said: "Now, I want you to have a good time tonight, cheer loud, and have fun, but I want you to save a little bit for tomorrow at Memorial Stadium."

Self, a hardcore KU football fan, opened his remarks with a nod to football: "The best thing that can happen for our school is that the football team be good, but isn't it about time the basketball season started?"

OK, but unlike in dreary years, the beginning of the basketball season doesn't signal the end of football.

Late Night was a nice way to spend Friday evening. The basketball portion of it was an entertaining preliminary to the weekend's main bout: Baylor vs. Kansas on Tom Kivisto Field.

The evening gave no hints as to the overriding question that hangs over a basketball season packed with so much promise: How soon will Brandon Rush be back? And when he returns, how much of his athleticism will he bring with him? Not all of it, Self acknowledged, noting that typically it takes an athlete 12 months to get it all back.

The next question then becomes, can he improve enough as a basketball player to compensate for whatever he lacks in explosiveness? Watch for how often he goes left to partially answer that.

The next key involves Darrell Arthur, named by Self as the most improved player from last season. A scary athlete of a man who stands 6-foot-10, Arthur has filled out, looks more muscular, even carries himself with more outward confidence. Can he turn himself into the rebounder his size, hands, quickness and explosiveness suggest he should be? With Julian Wright gone, Arthur's rebounding production becomes more important.

Wright's interior passing also will be missed. Arthur said he has improved his, which is a good thing because there was only one way to go.

As much as it's needed for Arthur to become a better rebounder and passer, it's as a scorer that he has a chance to really emerge, especially before Rush's return. Arthur averaged 16.3 points in the first six games, 8.6 in the final 32.

Look for Arthur to score a lot this season, but don't expect as many points from him as his school's football team will score in today's 45-10 payback against Baylor.

Fantastic. I loved this article, Keegan, nicely done. For the first time in a long time, the football team is still the #1 priority on campus in October. I sense a general feel around Lawrence, and that feel is a lesser excitement about 'late night' this year. This year it's like "oh yeah, late night IS tonight, isn't it? cool." then "how many TDs is Reesing gonna throw for against Baylor?" and the conversation shifts to 'hawk football.

I should have prefaced my first paragraph with the fact that by no means am I a KU Basketball hater, but I am a football guy first and last and as a football guy it's great to see two things: 1) our football team still undefeated in October and gracing the pages of SI, and 2) in Keegan, a columnist who appears to be of the same 'football first' mindset as myself and as happy as I am to see 'hawk football become relevant again. ROCK CHALK gonna be a wet one today, better pack your rain gear!!

I thought this article was going to be about football. Then, he started with a little MM and decided to talk about basketball for 60% of the time.

actorman, your wish is granted!