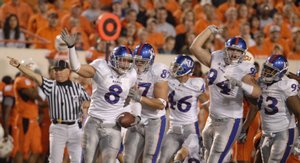 Stillwater, Okla. — The college football waters are anything but still. The giants continue to drop, one by one, and the basketball giant is the lone football school from a BCS conference without a loss.

The landscape is so different that Kansas University even has one of those classic tall, long-armed, high-jumping, fast Big 12 receivers playing on its side, pulling a big victory out of the sky, instead of having to watch one on the other side.

Marcus Henry did Saturday night to Oklahoma State what Adarius Bowman did to KU a year ago. In helping Kansas to a 43-28 victory against the Cowboys, Henry caught eight passes for 199 yards and three touchdowns.

He looked like one of those classic Texas Longhorns receivers through the years while he entertained a big turnout of KU supporters that included his mother, father and a dozen or so other family members and friends who came to watch the receiver who played his high school ball in Lawton, Okla.

Henry's story is one shared by many teammates on this band of football misfits that has blended into a bona fide national title contender. The rest of the Big 12 schools found a reason not to like him. He was too skinny. Todd Reesing was too short. Brandon McAnderson was too slow. Mark Mangino didn't look like a head coach.

They came to KU with perceived flaws and sweated them away, day by day, one stroke of the saw at a time.

The coaching staff spotted Henry at a summer state all-star game, and he joined the program shortly before workouts started.

"He just wanted an opportunity to play Division I football," Mangino said. "We gave it to him, and he's made the most of it."

They all seem to have hit stride at the same time, and the schedule has unfolded perfectly - not one of the 10 victories came against a team that even will make the "others receiving votes" portion of the national polls. Each week, the team's confidence has grown. That can be attributed in part to fortunate scheduling. The mistake-free football the Jayhawks make a habit of playing has nothing to do with the opposition and everything to do with how they think, how they practice, and how they avoid panic.

Henry, like McAnderson, is doing things in this his senior season he didn't come close to achieving in years past. Henry had three touchdown receptions last season. He has seven this year. The 67 yards in receptions he had against Toledo in 2006 was a season-high. He did better than that on one play Saturday, turning a well placed Reesing pass on a slant pattern and a downfield Dezmon Briscoe block into an 82-yard touchdown. Henry has surpassed 100 yards in receiving five times this season and has averaged 19.2 yards on his 46 receptions.

Henry's done a lot for a program that could win a national title by winning four more games in a row. The road gets far, far tougher in coming weeks. Kansas still is a longshot. Then again, so was a 10-0 start to the season.

Maybe Henry can start to get some NFL looks now. Brandon Rideau had a similar body type and probably not quite as good talent wise, and while he didn't get drafted he did get a shot. Henry could get invited to some workouts and if he does well end up in a free agency situation where he could work his way on to a team. It's a tough in road, but lots of great NFL players have had to make it the same way.

10 - 0 with a bunch of players nobody wanted. No matter what happens from this point on, Mangino should get coach of the year.

Too bad they cancelled NFL Europe. Henry might be one of those border line players who if given the opportunity to develop his skills could make an NFL roster. The NFL needs a D league, the CFL and AFL play a style of football that is too different from NFL.