Keegan: Rush vs. Afflalo a treat

San Jose, Calif. — He pondered jumping to the NBA and decided to return to school. He is the go-to scorer and shut-down defender on a balanced, deep team. He made his college decision based largely on a desire to remain close to family.

And his name is Brandon Rush, Kansas University's 6-6 sophomore.

They will be matched up against each other in tonight's NCAA Tournament West Regional final inside HP Pavilion.

It's a rare treat in basketball to see stars guarding each other. So often, coaches juggle assignments to protect the stars from foul trouble and fatigue. These guys don't need such protection.

How well Russell Robinson and Sherron Collins fare in keeping UCLA point guard Darren Collison out of the paint will be a huge factor, as will Collins' ability to penetrate. The most intriguing matchup is Afflalo and Rush.

"We're two of the more experienced guys on our teams," Afflalo said. "We're around the same size. We're different, but he's good, and I'd like to say I'm good at times."

Rush did a better job of capturing their differences.

"I think he's been more aggressive than me this whole year," Rush said. "He's a great player, a great shooter like I am. He has better ballhandling skills than I do. I think I'm more athletic." 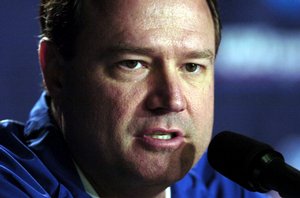 Afflalo said his decision to bypass the NBA draft "didn't come from others. It was more about how I felt within." Rush said it was his mother, grandmother and brothers who convinced him to return to Kansas for a second year.

Rush was branded Friday by UCLA coach Ben Howland as KU's go-to guy, which he certainly was in the great escape against Southern Illinois. The label came much earlier for Afflalo.

"Since age 8, I've been the go-to guy, or whatever you want to call it, at the end of games," Afflalo said. "At that point in time, the game becomes more relaxing for me. It's an important quality, and I don't know where it came from."

At various stages of games the past two years, Rush was put on and shut down Oklahoma's 6-3 Terrell Everett and Florida's 6-11 Joakim Noah. He slowed 6-9 Kevin Durant of Texas. Rush completely took USC's Nick Young out of the game.

One of the appealing qualities not quite fully grasped about Rush by many is how deeply he cares about performing well and winning. Consider how Rush feels about not stopping Acie Law's three-point shot from the right corner in Allen Fieldhouse.

"I see it every day on CBS," Rush said. "It's still kind of tough to get over. You have to look past that. They're out of the tournament, and we're still in. I'm pretty proud of that. He's probably the best clutch player I've ever played against. To hit that three right in my face ... I'm 6-6, he's 6-3, and he shot it right in my face. It's going to stick in my mind for the rest of my life that he hit that shot to beat us in our house."

Or not. If Kansas marches to Atlanta, too many other memories should erase it.

Rush, you put this game in the bag and thats the first step in erasing that memory

They always talk about his scoring, but he is the man on D for Kansas. Heard him compared to Bruce Bowen of the Spurs with the way he can lock somebody down. Way to go Brandon, keep up the strong D and your pints will come when they come.

Hey, save the pints until after KU wins the title! We don't want Brandon getting drunk.

Brandon may be gone after this season. Over on the CBS website, Brandon says he's gone to the NBA if he's expected to be drafted in the top 20.