Rush again gets his stop 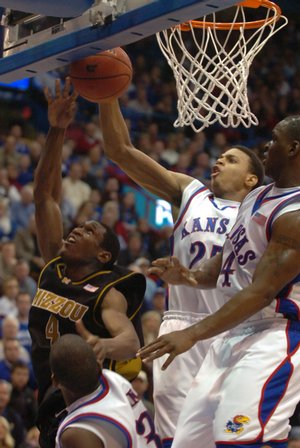 During a postgame media session, Kansas University sophomore Brandon Rush displayed exactly what he did to stop Missouri sophomore Matt Lawrence from hitting a three that would have tied Monday's contest in the final seconds.

Even though the handful of reporters was within breathing distance of Rush, no one was in harm's way.

The defense was that simple, as he again came through in the clutch defensively to secure an 80-77 Jayhawk win at Allen Fieldhouse.

"Yeah, like that," Rush said with his hands held high over his head and a grin on his face. "Coach said in the timeout, 'Don't jump, just wall up, put your arms over your ears.'"

Rush, who locked down Iowa State's Mike Taylor in the final 11 minutes Saturday in a 68-64 overtime victory on the road, was defending a different type of player Monday, and it threw him for a loop.

Covering Lawrence, a 6-foot-7 sharpshooter, was nothing like sticking to a shifty, 6-foot-2 guard who liked to attack the rim and create on his own.

"It was kinda hard, because he comes around a lot of screens, they screen a lot for him, so he was catching and having open threes. And then he's tall, too, so that really helps him a lot," Rush said. "He was lighting me up the whole game, so they figured they'd pick on me for the last shot, and I think I played pretty good defense at the end."

Lawrence led the Tigers with 19 points, 12 of which came off three-pointers. He lost Rush on those screens multiple times during the course of the game, creating just enough space to get shots off.

But his teammates agreed there was no one better to guard the last shot, especially coming from someone with Lawrence's skills, than the lengthy and athletic Rush.

"I think Brandon's one of our best one-on-one defenders on the team," said KU freshman Darrell Arthur, who had a pair of key blocks down the stretch. "We just put him on (Lawrence) so he could get that long arm up and contest the shot."

While Rush didn't necessarily need to try to swat away Lawrence's final attempt - a fadeaway from well beyond the arc on the left wing - he led the Jayhawks with three blocked shots on the night. It was the fourth time this season he has knocked away at least three opposing field-goal attempts in a game, a feat most guards can't claim.

And by cleanly executing defense - which, as he literally showed off to the media, was as simple of an approach as possible - he solidified his reputation as KU's late-game defensive stopper.

"I'm really liking it," Rush said of his role. "But sometimes their best players get off, like Lawrence got off on me today, and make some big shots.

"That last play was me just buckling down, because we knew who the ball was going to."

I give Rush credit for the last play, but Lawrence left Rush's underware on the floor a couple of times last night. Lawrence is a one-dimensional player, but IMHO he was more the MVP than Rush last night and kept the Tigers in the game especially when KU was going to run them out of the building at the beginning of the game (first 10 minutes). KU almost put them away but Lawrence kept them in it!

Actually, neither of them was the MVP. It was clearly Collins.