MADISON, WIS. — Cruising to what was shaping up as a surprisingly easy victory over Ohio State, Wisconsin took its foot off the gas and nearly contributed to the growing legend of Greg Oden.

After taking control midway through the second half, the third-ranked Badgers blew a double-digit lead to the fifth-ranked Buckeyes, then held on for a 72-69 victory despite two dunks by Ohio State's already-heralded freshman center in the game's final 37 seconds.

Ohio State's Jamar Butler missed a potential game tying three-point shot at the buzzer, and the Badgers (16-1, 2-0 Big Ten) managed to hold on in an early matchup of conference favorites.

"We know we have a chance to be a great team," Wisconsin senior forward Alando Tucker said.

"We were in this situation a couple weeks ago at Florida and we couldn't respond," Matta said. "I like the fact that our guys fought back and put us in the position to have a chance to win the game. But we've got to find ways and be more consistent with our play and understand the value of every possession, and I think we can do that."

Still, Matta wants to see his team "toughen up."

"This team's been great with what we ask of them, and we've just got to keep finding ways to get better," Matta said.

"I don't know how many bumps they're going to get, but I don't think it's going to be very many," he said.

Kammron Taylor scored 25 points for Wisconsin, but made only five of eight free throws in the final 1:04 to leave the door open for Ohio State. 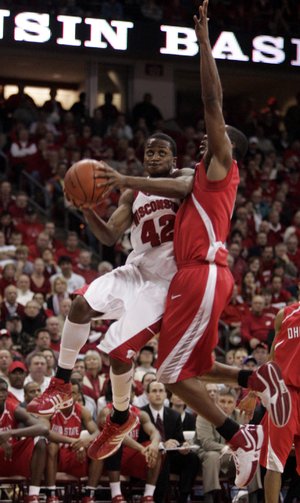 "It was something new, trying to keep the lead at the free throw line instead of having to make a big shot," Taylor said.

The Badgers used a 14-0 run to take control midway through the second half. But the Buckeyes rallied to close within 69-64 on a dunk by Oden with 37 seconds remaining.

Taylor then made one of two free throws on the other end, and the Buckeyes' Ron Lewis hit a three-pointer to cut the lead to three with 25 seconds left.

Joe Krabbenhoft hit one of two free throws for Wisconsin, and Oden dunked with 8.9 seconds left to cut the lead to 71-69.

Until the final minute, Wisconsin's front line had played effective defense against the 7-foot Oden, who finished with 10 points, seven rebounds and six blocked shots.

"Most guys like him will get better, so I'm glad this happened early," Ryan said.

Matta said he's still "living for the day" when Oden can get the cast removed from his right wrist after having surgery in the offseason.

Tucker added 17 points for the Badgers, who are 13-2 against ranked teams and 40-2 in conference home games under Ryan.

"I'm glad we can check this one off of places we have to go," Matta said. "Right now, we're sitting at 2-1 in the Big Ten and we've played in two pretty tough environments."

Ivan Harris had 17 points for Ohio State, which won at Illinois.

It was a breakout performance for Wisconsin sophomore forward Marcus Landry, who had 10 points and four blocked shots.

The Badgers led 43-41 after a three-pointer by Butler, but Krabbenhoft scored inside to start Wisconsin's 14-0 run that featured several key plays by Landry, who sat out part of last season after being ruled academically ineligible.

A block by Landry led to an end-to-end layup by Michael Flowers that put Wisconsin ahead 47-41. Landry rebounded his own miss and scored on a putback to put the Badgers up 55-41.

Oden blocked Landry on the Badgers' next possession, but he got the ball back and got it to Flowers, who drove the lane and scored to put Wisconsin ahead 57-41 with 9:20 remaining.

Landry, who has taken only 10 three-point shots all season, hit a 3 with 8:04 remaining that made it 60-47. He also helped guard Oden down the stretch.

"I was giving away height and weight playing against Greg Oden," Landry said. "I just did what I could to take things away from him. I hit some big shots and hit some threes. It just gave the team a little boost and helped everybody out."

Ryan said his team suddenly became tentative on defense down the stretch. Ohio State went on a 17-9 run as Wisconsin's shaky free throw shooting kept the Buckeyes in the game.

At halftime, the sellout crowd at the O'Connell Center welcomed the Gators football team, which beat Ohio State, 41-14, on Monday night in the BCS championship game. That made Florida the first school to hold the national championships in Division I football and basketball at the same time.

The Gators (15-2, 2-0 Southeastern Conference) built an early 12-point lead, then spent the rest of the night holding off the Razorbacks (12-4, 1-1), who briefly took the lead before faltering over the last 10 minutes.

Rebounding from a 27-point loss at Arkansas, the Crimson Tide (14-2, 1-1 Southeastern Conference) held the Tigers to just 35 percent shooting and led by nine points at halftime.

Raleigh, N.C. - Vernon Hamilton scored 21 points, and Clemson beat North Carolina State to match the best start in school history and remain the only unbeaten team in Division I.

Air Force Academy, Colo. - Dan Nwaelele scored 22 points, and Air Force rallied from a 15-point halftime deficit for its 12th straight victory. Mat McCraw had a career-high 21 points for the Falcons (16-1, 3-0 Mountain West), who trailed as many as 21 points in the first half, then opened the second half with a 21-2 run to take a 45-41 lead.

South Bend, Ind. - Russell Carter scored 19 points and kept West Virginia's Frank Young from getting off a shot at the buzzer as Notre Dame defeated West Virginia. The Mountaineers (13-2, 3-1 Big East), who trailed by as many as 14 points early in the second half, closed to 55-53 when Darris Nichols hit a three-pointer with 1:53 left.