Las Vegas — Joakim Noah and Al Horford are to college basketball what Tim Duncan and David Robinson used to be to the NBA: a tall, skilled, athletic tandem nobody in the game can match.

Except that late Saturday night in Orleans Arena, Kansas University had an answer for the twin towers from the defending national champion Florida Gators.

Noah and Horford were good, all right. It's just that the emotional Julian Wright and his stoic sidekick Darrell Arthur, set up nicely by the guards, were even better.

Wright's 17 first-half points, high energy and fancy passing carried KU to a six-point lead at the half.

"Julian in the first half was as good as a guy can be in college," appreciative KU coach Bill Self said.

Arthur, repeatedly demanding the ball in the stretch runs of regulation and overtime, catching nearly everything thrown his way, drawing foul after foul, and generally showing a great feel for the game, looked like anything but a freshman.

You might never again read this sentence about Billy Donovan's defending national champion Gators: Their starting guards outscored the other starting guards by 16 points and they still lost the game.

Also fueled by Brandon Rush's clutch, aggressive work on defense and on the defensive boards, Kansas made the champs taste defeat for the first time in a long time, 82-80, in overtime in front of a loud, proud KU crowd, part of which spilled onto the court after Corey Brewer's three-point attempt at the buzzer clanged off the rim.

Arthur, limited to three minutes in the first half because he had two quick fouls, finished with 19 points and nine rebounds in 16 minutes. Wright, the MVP of the Las Vegas Invitational, contributed 21 points and 10 rebounds. Combined, that's 40 points and 19 rebounds, compared to 26 and 12 for Noah and Horford.

"We've been waiting for this game ever since summertime," Arthur said. "It was like the talk of the town, us and Florida. We just went to see who was going to be the best tonight." 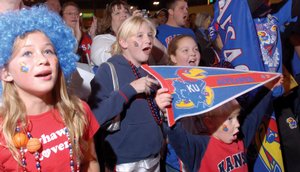 The players met in the team hotel after a lackluster effort Friday night against Ball State.

"We were just saying how we need to come closer as a team," Arthur said. "The Oral Roberts game : we're always going to remember that. It was a slow start for us. Hopefully, tonight's game gave us some confidence and we can just keep feeding off of it."

While Arthur and Noah got into early foul trouble, Wright made sure to stay on the floor, and that's why KU was able to take a 37-31 lead over the defending national champions into the locker room.

On those nights when his mind, which forever travels at a million miles an hour, and his body move at the same pace, Wright sprinkles energy up and down the roster and into the stands. He's a blast to watch play at such times and an absolute terror to play against.

He can't match Florida's players in either bulk or big-game experience, but even as nimble as the Gators are, they can't match Wright for quickness.

Driving off of shot fakes and throwing down a variety of slams, Wright made Orleans Arena sound an awful lot like Allen Fieldhouse and the Jayhawks played up to that Sports Illustrated cover projection.

There are a few of things that happened in this game we should not overlook, or in Keegan's case gloss over.

The KU team played well and at a high intensity. I believe Florida may have had a "ORU" experience. The next thing I believe happened is that BS "coached" extremely well for most of the 2nd half. "The giving the game away in the last 30 seconds of regulation did remind me very much of the K-State loss last year at home.

And last, and I believe KU can build on; this is a game this KU team should not have won. BS said the same in his "post game "interview". To win a game like this on a national stage indicates to me how much potential this team has.

This is a good team and maybe even a great team. However, it will take one heck of a coaching job to make this team finish as a National Champion.

Good words hppychieffan! Was a great win, but it is November too! KU was not as deep as FU tonight and was lucky it did not matter. A rematch will be far different and their is a lot of water to gounder the dam before this will happen. It is a long seaon and Self has to coach this team for the long haul! Need more from Collins who was out of his element inthis game. Looked like a Frosh to me!

We can agree and perhaps disagree...

KU is young and has lots of room to grow and Bill Self will have to use great coaching ability this year to take us to the final win of the season - just as any coach and any team would. However.

For Donovan to indicate in so many words that KU got lucky. Or for others to suggest a comparison to ORU for our Jayhawks insults our KU tradition and our current players.

Florida is the upstart and lets not forget it.

Which leads to one other point...

KU fans do NOT storm the court in basketball - period. We are never surprised to win or honored to have a win against any team so there is no need for giving the other team the idea that we are just glad to get away with a win.

They weren't your regular fans. They were fans from everywhere. We just beat the #1 ranked team/defending national champion. It was a huge win for us. No one expected us to win so let the fans have fun on the court. Not to mention no one made any big deal about the fans on the court. There were only a few fans that actually ran out there and they didn't group together to celebrate so no one really noticed. We are the powerhouse, but last time I checked, our last championship was in '88 and we were underdogs then too. Florida may be an upstart but they sure play like a powerhouse.

How can no one have really noticed it if I could notice it on tv? I thought it was embarrassing and I hope to God that they were not actual KU students or alumni. I also thought it was embarrassing when Witherspoon (pretty sure it was him, but not possitive) ran around the court holding up the 'Kansas' on his warmup. I don't care if you have fulfilled your dream of getting on the KU basketball team, if that's how you are going to act we don't need you.

I would have to agree with hakwer00, that was pretty bad of Witherspoon. Everyone knew who won the game, no need to flaunt it. That's not Kansas basketball. We win with class. I woould probably get carried away as well, but I hope that doesn't happen again. Rock Chalk Jayhawk!!

Kansas outplayed Florida and has more talent. 'nuff said. They are young, and have a tremendous upside. Florida will spend the rest of the year trying to prove to themselves they were not a fluke last year--but the truth is, to win the national championship you have to get lucky--early pairings against teams on the way down or who you match up well against, a few calls, and venues that inspire a team rather than demoralize. Florida had the perfect run, just like Kansas did in 1988.

Last night, Kansas played like they did against Texas last year in the Championship game. They must find that fire every time, even against lesser talents--it is like jazz music, you play some bad clubs, but you must pick up your horn and inspire.

KU is very, very young. If they can beat Florida in November then they should beat them in March. If you think those kids were good last night wait until five months from now! As far as the fans go there might have been a few clowns that ran on the court but over all the KU fans there were amazing! The announcers were comparing that place to Allen Fieldhouse and to see so much support so far from Kansas got me so fired up and proud to be a Jayhawk! My hats are off to you guys-way to go!

KU was just as deep as Florida. Our bench outscored theirs 4-2.