Las Vegas — Florida's Gators taught all of college basketball a valuable lesson last year: Sophomores, despite their youth and inexperience, can win it all.

"I think it encourages everybody going into their sophomore year," KU sophomore Brandon Rush said of the Billy Donovan-led Gators, who rode a batch of second-year players to a six-game winning streak in the NCAAs that resulted in the 2006 national championship.

"We are our own team, our own personality," Rush added of a KU squad that includes other highly regarded sophomores in Mario Chalmers and Julian Wright. "They did their own thing. Now it's somebody else's turn or their turn to do it again."

All those players flirted with heading to the NBA, but came back this season after dismantling George Mason by 15 points in the national semifinals and UCLA by 16 in the finals.

"I watched some of the UCLA game. They blew UCLA out, and they have everybody back," Rush said.

The Gators, who opened the 2005-06 season with a 17-game win streak and concluded with an 11-gamer, may seem invincible, but don't believe they are, and it keeps the players working hard, Donovan says.

"This is a different group of kids. They realize they are fighting a lot of the human elements of what happens to a team when you win a national championship and have so much returning," Donovan noted. 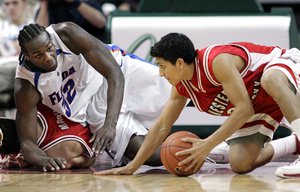 "Our guys heard all offseason how hard this season will be. They guarded about being complacent and selfish and not working hard. To their credit, they are focused, prepared and ready to play and realize every team will be at their best against us."

Donovan, whose team went 10-6 in Southeastern Conference play a year ago only to storm to the postseason crown, realizes he could have lost three or four players to the pros.

"Forget their talent level. I feel fortunate I got a chance to coach them again because of what they represent and are all about. Their makeup and the way they approach the game is a different level maturity-wise than most," Donovan said. "I don't know where that will lead us this year. I do feel fortunate being around them every single day. It'll be very disappointing whenever they choose to leave."

The Jayhawks don't plan to back down against an ultra-talented Florida team.

"I look at it : we have a lot more pieces than they do," junior Russell Robinson said. "It'll come down to who is tougher and wants it more."

Donovan's Gators are definitely the darlings of college basketball, picked by many pundits to repeat as national champs.

"Florida can do so many things. They can play to their big guys, press, slow you in transition," Self said. "With Horford and Noah, it's obviously the best front line in college basketball. The impressive thing is they are basketball players, not just postmen. It's a very skilled, talented group. Their guards are as impressive. The game will be a great measuring stick for us."

It's almost a relief the game is finally here.

"I've been thinking about it ever since I heard we were going to play," Rush said. "It should be a lot of fun."