Tennessee State had a double whammy Tuesday in Allen Fieldhouse - the Tigers were playing against No. 10 Kansas University, and they were playing short-handed.

"It's very difficult right now (because) we are undermanned because we have two potential starters that won't be eligible until Dec. 19," TSU coach Cy Alexander said following the Tigers' 89-54 loss to KU. "So when Clarence Matthews and Larry Turner aren't on the floor, we're just not that good. : I think we're going to be a very good basketball team when we get all of our pieces of the puzzle put together.

"Kansas is a top-five team in the country, talent-wise, and as they continue to play into the season, they're going to be one of the top teams in the country. So it's no embarrassment to lose to Kansas. : They were the more talented team, and they showed it in every aspect."

With 6-foot-7 Matthews and 6-11 Turner getting into early foul trouble, the post opened up for Kansas both offensively and defensively.

"When Turner and Matthews got in foul trouble and we had to take them out, then you're going against second-line post players," Alexander said. "You're going against a freshman, Rashad Armstrong, and Courtney Bohannon, who's really not a true post guy : so that's why they dominated. 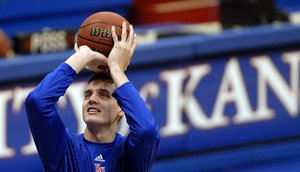 "I think Matthews and Turner can compete with those guys (Kansas' post players). So again, it all comes back to right now we're limited with personnel, and we're playing second-line players way too many minutes."

Though Matthews - who led the Ohio Valley Conference in offensive and defensive rebounding a year ago - played 30 minutes, he had to play more conservatively in the paint and only came away with six rebounds.

"Every game is physical inside - I've never come upon a game that wasn't physical," said Matthews, who picked up five of his rebounds in the second half before fouling out.

The Tigers were powered down low by Bohannon, who had seven boards, as Tennessee State finished with only three fewer rebounds than Kansas in the second half.

"We did not rebound the ball in the second half like I think we are capable of doing," KU coach Bill Self said. "We lost interest, unfortunately, and that should never happen, but our guys are human."

TSU's poor post play wasn't the only result from early foul trouble, as Alexander's squad gave up 28 points off of turnovers and 17 fast-break points because of the lack of starting talent.

"That was our No. 1 key - transition defense," TSU's coach said. "We didn't do a good job, and Kansas is one of the best teams in the country. We tried to slow them up with a three-quarter press. It worked for a little bit, but then when we had to substitute and go from front-line players to second-line players, it's just a big drop off.

"Again, I'm not going to get down on these kids, because it's only November, and we've got a long way to go."