Paris had 23 points and 11 rebounds for her school-record 34th double-double, and Chelsi Welch matched her career-high with 23 points to lead No. 3 Oklahoma past No. 20 DePaul, 105-71, Sunday.

It was Oklahoma's most lopsided victory against a ranked opponent in school history.

"I think what a win like this does is, it doesn't have anything to do with the number of points that we scored or the margin of victory even," OU coach Sherri Coale said. "It's that we understand we can beat the No. (20) team in the country and still have all these things that we need to improve upon."

Coale said the Sooners (1-0) struggled to box out on rebounds, but they corrected that to beat the Blue Demons (0-1) on the boards 34-13 in the second half. Oklahoma surpassed 100 points for the second time in the past six years.

"I think this win was huge for us. You talk about statements and things like that, but just for us to score that many points and know how much improvement we have to make is really encouraging," Welch said.

DePaul lost starters Erin Carney and Caprice Smith to foul trouble during a 9-0 Oklahoma run early in the second half. Ashley Paris capped the initial run with a layup to make it 57-40, and the Sooners started a 10-1 spurt soon after. 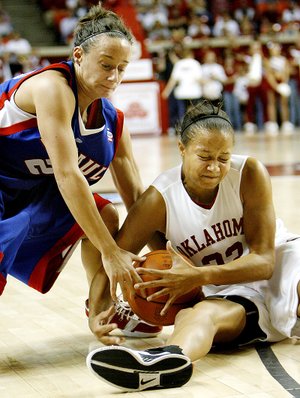 Oklahoma guard Britany Brown (33) and DePaul guard Missy Mitidiero (22) fight for the ball in the first half of the State Farm Tip-Off Classic. Oklahoma routed DePaul, 105-71, Sunday in Norman, Okla.

Leah Rush's jumper from the left corner stretched the lead to 69-43, and the Blue Demons were never got closer than 19 as the Sooners closed the game on a 12-2 run.

The double-double was the 29th in a row for Paris, a preseason All-American. Ashley Paris, Courtney's twin, added 16 points, and Rush scored 11 for Oklahoma, which won its ninth straight home opener.

"We couldn't have beaten the Sooner Stilettos the way we competed," DePaul coach Doug Bruno said, referring to Oklahoma's club for female community and business leaders.

Boulder, Colo. - Caroline Williams scored 21 points, including a clutch three-pointer, and Carla Thomas had 26 points and seven rebounds to help Vanderbilt survive the upset bid. Christina Wirth added 14 points for Vanderbilt (1-0), which is unbeaten in four games against Colorado.

Waco, Texas - Bernice Mosby had 20 points, 17 rebounds and three blocked shots to lead Baylor to victory in the second round of the Preseason WNIT. Mosby had 15 points and 12 rebounds in the first half, and Baylor (2-0) jumped to a 41-18 lead. The Bears led by as many as 29 points before Hofstra (1-1) rallied.

Austin, Texas - Tiffany Jackson scored 24 points to lead Texas to a victory in the Basketball Travelers Classic. Jackson was 8-for-14 from the field and the free-throw line.