It might not be best, but it's among most flexible

Such a gifted communicator is Bill Self that with one answer to one question he can efficiently kill what could have been months worth of hype.

How, he was asked, does this year's team compared to the 1996-97 team that went 34-2 and lost in the Sweet 16 to eventual national champion Arizona?

"We don't on paper," Self said. "If I'm not mistaken, (Paul) Pierce was arguably the best player in the country. Raef (LaFrentz) was third or fourth pick (third in NBA draft). Jacque (Vaughn) was a first-round pick, and Scot (Pollard) a first-round pick. The same team had Billy Thomas, an NBA player, and Ryan Robertson, an NBA player. To say our talent level is there would be misleading as of today."

He didn't dispute there is potential for that many NBA players, just that not all of them are as close to being ready as the players from that team were.

"To think where certain guys could be when they finish their careers : we have multiple guys who have an opportunity to make money at this game," he said. "To have all of them together on that one team close to being ready (for NBA), I don't think it'd be the case with this team." 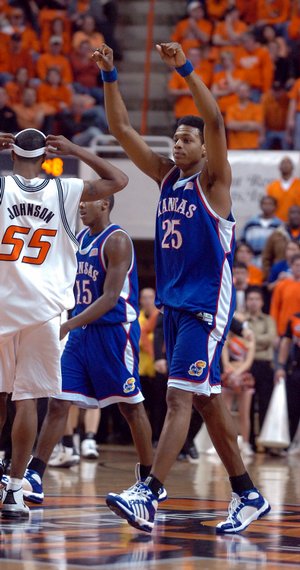 Brandon Rush reportedly has improved his ballhandling, making him - and KU - even more dangerous than last season.

Where this team could have the edge on any team in the country this year and maybe even any team in KU history is in the roster's versatility.

Consider the point-guard position, where Russell Robinson is the returning starter, and Sherron Collins, the second-ranked high school point guard in the nation, will get plenty of minutes.

Collins had by far the flashiest dunk at the McDonald's All-American game. Robinson's next tricked-up slam will be his first. Collins is a gifted scorer, Robinson more of a facilitator. Robinson makes the pass that gets the offense going at the right time. Collins swings for the fences with fancy feeds. Robinson is the team's best perimeter defender, Collins the most in need of fundamental improvement in that area.

And then there is Mario Chalmers, sort of a combination of the two guards, a far better defender than Collins, a better three-point shooter than either one, and not yet in the table-setting mindset shared by Collins and Robinson.

"You could see times where all three are on the court at the same time," Self said. "That would have a chance to happen some. You could also see a lineup in there with Julian at the 3 and Brandon at the 2. You could still play that way some. That could be a direction we go in."

College basketball coaches, as opposed to most NBA bench bosses, have the ability to serve the role of the general manager as well. It's no accident that Self has a roster stocked with versatile, athletic players.

"Ideally, you want to have a position-less perimeter," Self said. "Give us three point guards, as long as two of them can shoot and one can defend the 3. That's a great world. You have great decision-makers, ballhandlers and passers in the game for the majority of minutes, if that's the case. I would love to play that way, where you don't have to have the same guy initiate the offense every time. Whoever has it, goes." 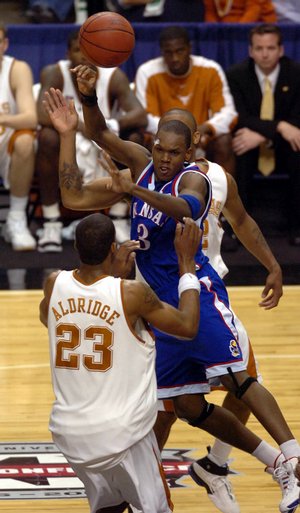 Russell Robinson is another of KU's interchangeable players. His strength is igniting the offense.

Self left behind that sort of backcourt trio at Illinois, where Deron Williams, Dee Brown and Luther Head led the Illini to the NCAA title game, only to lose to North Carolina.

If, as advertised, Brandon Rush and Julian Wright have become tidier with the basketball, Self can pick and choose his perimeter options, causing matchup nightmares for opposing coaches.

"Once we get into the offense, the positions are interchangeable anyway," Self said. "That's why we work hard on Brandon and others really being guys who can handle the ball in the open court. Those are the hardest teams to defend."

The coach, in his fourth season at KU, said that he anticipates freshman Darrell Arthur playing the 3, 4, and 5 positions during his KU career, once he polishes his ballhandling skills.

With C.J. Giles out of the picture, the deep and versatile roster won't be so deep that it should create chemistry problems.

Self prefers an eight-man rotation, and it's easy to determine which eight players will get the majority of the minutes. Figure on Wright playing inside and on the perimeter. Robinson, Chalmers, Collins, and Rush will get the majority of the perimeter playing time. Sasha Kaun, Darnell Jackson and Arthur will fill the inside minutes not taken by Wright.