Robinson vows to raise his voice

When a Kansas guard is looking for inspiration to become more vocal, one name comes to mind for junior Russell Robinson.

"One of the things he told me is that I have to become more vocal," Robinson said of what he had learned from the Kansas and Big 12 career assists leader. "I am taking strides in the right direction. I am more of a lead-by-example kind of guy, but lately I have been more vocal."

Sophomore Mario Chalmers has seen that Robinson's work with Miles has helped him become a better leader and a better player.

"When Aaron used to come back and play pickup with us, they used to just go out of it," Chalmers said. "I think he is taking a little bit of Aaron and adding it into his game and trying to be more of a vocal leader for us."

With no seniors on the current roster, Robinson has taken it upon himself to be the leader of the team, both on and off the court.

"We look at Russell as the pulse of our team. Without him we are just not flowing together like we normally do with him," Chalmers said. 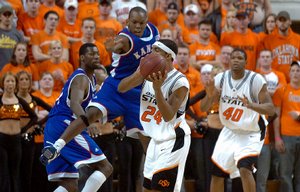 Junior Russell Robinson, center, has taken it upon himself to be a leader on a team without seniors.

Robinson put up numbers in nearly every category last year, leading the teams in assists, third in the Big 12 in steals, and third on the team in points per game. They were nothing overly spectacular on an individual scale, but Robinson did it in so many areas, that it was difficult to miss.

Despite his success last season, he is looking to improve more this year.

"I just want to get better and improve," Robinson said. "I'm going to try to work on my shot. I need to get that as consistent as I can. I've put a lot of emphasis on that."

His toughness is unmatched on the team, and his teammates look to him because of it. That was evident in the Big 12 tournament last season, when he caught an elbow to his face, which caused blood to flow. Robinson waited until after the game to get stitches, instead electing to be taped up and help Kansas win.

"Knowing that he is going to give his all every day in practice, when it seems like no one wants to go as hard, he is there to fire you up," sophomore forward Julian Wright said. "He does the little things necessary to help the team, and we always look up to him."