Kleinmann dedicated on, off court

After a late-night return to Lawrence from a Madison Square Garden road trip last season, Matt Kleinmann quickly realized his night wasn't over.

"Around 3 in the morning, I realized I had a project due in a couple of days," the Kansas University sophomore forward said. "It was one of those days that it was so cold, my head hurt from just walking outside. I had two to three jackets on."

Kleinmann walked up the hill toward the library in an attempt to survive every college student's worst academic nightmare - the all-nighter.

On his walk up the hill, the Overland Park native spotted a familiar face.

"Coach (Bill Self) drove by. His story is that he looked out and saw one of his players walking by and was like, 'Is that Kleinmann?' so he gave me a ride about halfway up the hill," Kleinmann said.

Aside from being on the KU basketball team, Kleinmann is an architecture major. He said all-nighters were commonplace.

If you're unaware of the dedication it takes for Kleinmann to balance academics with athletics, this should put it in perspective.

"When I'm busy, I'll put in about eight to 10 hours a day just in studio or working on projects in my room," Kleinmann said. "And that's outside of class and outside of basketball."

Kleinmann took a red shirt during the 2004-2005 season, so this will be his third season in Lawrence. 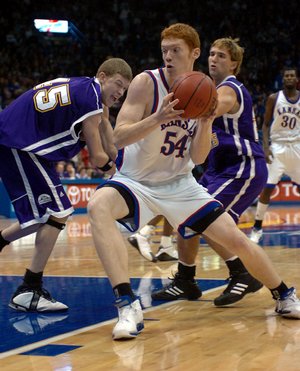 He saw only 41 total minutes as a freshman last season. He was 7-of-11 from the floor.

He said he expected those numbers to increase this season. He justified that expectation by bulking up in the offseason.

"I think I came in to KU about 230," Kleinmann said. "I've fluctuated for the first couple years here, but right now I'm close to 250. A lot of that's muscle, but a lot of that's eating right and getting in the rhythm of playing basketball every day."

Kleinmann's teammates have noticed a difference in his game as well.

"I remember him just being this red-headed guy who was a walk-on," junior center Sasha Kaun said jokingly. "I think he's improved just as much as anyone else on this team."

Kleinmann said he wanted to make his game more physical this season. Kaun said he noticed in practice.

"I think he's become more confident getting the ball and trying to score," Kaun said. "Before, I think he was kind of scared and didn't have it. Now, he makes a move and finishes it."

Kleinmann wanted to play basketball at KU from his days in high school at Blue Valley West. The University of Pacific offered him a basketball scholarship, which Kleinmann turned down. Instead, he went to Kansas as an invited walk-on.

"I remember thinking beforehand, if KU said something, I'd do it," Kleinmann said. "It was a perfect match for me because I wanted to go here academically anyway."

Kleinmann said even though he was guaranteed a spot on the team, there was still added pressure when he first arrived on campus.

"You never feel like you're going to live up to the expectation of a Kansas Jayhawk, especially when you're a walk-on," he said. "There's a lot of pressure in wearing the uniform. There's a high level of excellence here."

One of Kleinmann's most vivid memories about coming to Kansas as a red-shirt freshman was practicing against guys he used to watch on TV.

"It was very intimidating being in the same locker room as Wayne Simien, Keith Langford, Aaron Miles, Mike Lee," he said. "I had seen these guys for the last three or four years, and I was just awe-struck for my first couple months here."

It would be nice if he could step up at the center position while Kaun is out so as to not alter our team outlook. A big guy with 5 fouls to give and, so far anyway, a soft touch will the ball down low.