Some locks, some shocks

Indianapolis — The madness was on before the first tipoff. This year's NCAA Tournament draw was a mix of power and unpredictability, with the top seeds surprising no one - and the rest of the field stirring all the debate.

The No. 1 seeds went as expected Sunday, with Duke first overall, followed by Connecticut, Villanova and Memphis. Beyond that, the 65-team lineup was one big bracket of questions and curious omissions.

¢ The Big East landed a record eight teams in the field, but what's shocking is that it didn't get a ninth, with Cincinnati among the notables who were passed over. Meanwhile, the "mid-major" Missouri Valley got four bids, as many as the traditionally powerful Atlantic Coast Conference.

¢ Air Force, 38th according to RPI rankings for record and strength of schedule, got in. By comparison, among the left-out teams were 21st-RPI-ranked Missouri State; Hofstra, which finished 30th; and 32nd-ranked Cincinnati.

¢ Tennessee, which lost four of its last six games, was rewarded with a No. 2 seed, higher than both Southeastern Conference tournament winner Florida and SEC regular-season champion Louisiana State. 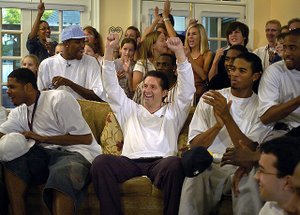 Memphis coach John Calipari, center, celebrates with his team. The Tigers watched Sunday in Memphis, Tenn., as they were tapped as a No. 1 seed in the NCAA Tournament.

¢ George Washington, with the best record in the tournament at 26-2 and ranked sixth in the Associated Press poll, was dropped to an eighth seed.

Selection committee chairman Craig Littlepage explained that the reasons were as varied as the process itself.

In George Washington's case, he cited the Colonials' nonconference record. In the case of Missouri State, he cited a weak record against the other MVC schools under consideration.

And in the case of Air Force, it seemed the committee almost went on a gut feeling.

"We had a discussion and the questions that asked were similar to, 'Who is tough?' or, 'Who is another team you wouldn't want to play?"' Littlepage said. "Air Force provided us with some unique things."

Littlepage defended the committee's decisions on everything from selections to seedings to placements - even how injuries factored.

At one point, the committee had to consider changing the rules. Had Cincinnati (19-12) become the ninth Big East team in the field, it would have broken a policy of not allowing conference teams to meet before the regional finals.

But Cincinnati went from a virtual lock to outside-looking-in after losing to Syracuse in the Big East tournament, an outcome that stunned interim coach Andy Kennedy.

"I'm open to anyone telling me a justifiable reason as to why this team did not get to the NCAA Tournament other than, 'Andy, we can't let nine teams from one league get in, it sends the wrong message,"' Kennedy said.

Villanova star Allan Ray's eye injury was another consideration. The committee has been known to dock teams that lose key players, and the committee was discussing that possibility Sunday morning. But it got some help when Texas and Ohio State both lost in their conference tournament finals.

There was a more decipherable method to much of the madness.

Duke, which tied North Carolina for the most ever No. 1 seeds at 10, was the bracket's top team overall. UConn, the only team other than Duke to be ranked No. 1 this year, is a top seed for the fourth time. Memphis and Villanova both earned their first appearances at the top of the bracket - right where they figured to be.

And, of course, the biggest conferences secured the vast majority of the 34 at-large bids. The Big Ten and Southeastern each had six teams selected, while the ACC, Big 12 and Pac-10 all had four.

Among the new multi-bid leagues were the Missouri Valley (four) and the Colonial Athletic Association (two), although both commissioners were hoping for more.

"I thought it was a good day, but we had hoped for a better day," said Colonial commissioner Thomas Yeager, who saw Hofstra left out.

Duke (30-3) opens the tournament Thursday in nearby Greensboro, N.C., against Southern University. Texas, the No. 2, plays Pennsylvania in Dallas.

Memphis (30-3), which lost one game in Conference USA this season, leads the Oakland Regional and plays Oral Roberts, which was last in the tournament in 1984, in Dallas.

Connecticut is the top seed in the Washington Regional. The Huskies (27-3), who were beaten by Syracuse in the Big East quarterfinals, play Albany, which is making its first appearance, in Philadelphia.

Villanova (24-4) is the top seed in the Minneapolis Regional. The Wildcats will open in their home city of Philadelphia against the winner of Tuesday night's opening-round game between Monmouth and Hampton. The other game in that doubleheader has eighth-seeded Arizona against No. 9 Wisconsin.

This will be the 27th tournament for Arizona coach Lute Olson, tying him with Dean Smith and Bob Knight for the most in NCAA history. It is Olson's 22nd straight appearance with Arizona, moving him within one of Smith's record set at North Carolina from 1975 to '97.

Ohio State is the second seed; the Buckeyes play No. 15 Davidson in Dayton. Third-seeded Florida, which repeated as Southeastern Conference tournament champions Sunday, plays in Jacksonville against No. 14 South Alabama.

The Final Four is April 1 and 3 in Indianapolis.