"He said that looks like an Oklahoma State basketball team," said his son - and the Cowboys' interim coach - Sean Sutton. "That was probably the best compliment he could have given me."

Indeed, the Cowboys played like a team inspired, rather than distracted, by the recent chaos surrounding Eddie Sutton as they rode a 22-point, nine-rebound outing from JamesOn Curry to an 81-60 rout of No. 6 Texas.

Many of the 9,053 fans - a season low for Oklahoma State, due in part to icy road conditions - stormed the court after the victory, Oklahoma State's second this season against a ranked opponent. The Cowboys (14-12, 4-8 Big 12) had lost seven of their previous eight games, but gave Sutton his 795th career win in a most unlikely fashion, dominating a team in the running for a No. 1 seed in the NCAA Tournament.

"I kept telling them all week long that if they would work hard and listen, then good things would happen, and they would be rewarded. Everything we asked them to do, and told them what it would take to win this basketball game, they did." 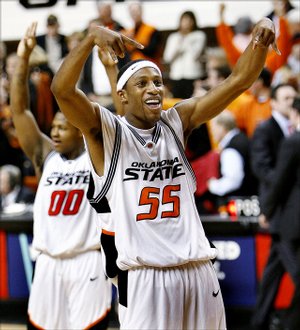 Oklahoma State's Torre Johnson (55) and Byron Eaton celebrate after beating Texas, 81-60. The Cowboys' victory Sunday in Stillwater, Okla., knocked Texas from the No. 1 spot in the Big 12 men's basketball standings into a tie with Kansas University for the league lead.

The emotion was evident in Sean Sutton's voice and his actions. As the clock wound down, he worked his way down the bench, hugging his players.

It was the third game that Sean Sutton guided the team. Oklahoma State officials have said that even though Eddie Sutton is on a medical leave of absence, any Cowboys victories will go on his record.

Eddie Sutton was injured in an accident Feb. 10 and subsequently charged with drunk driving. He took the medical leave three days after the accident and admitted Wednesday that he had an alcohol problem.

Sutton, who underwent treatment for alcoholism in 1987 when he was the coach at Kentucky, has said he'll seek further treatment for his drinking problem starting later this week.

There were many signs of support for Sutton at Gallagher-Iba Arena, where the court is named for Sutton. One prominent banner read, "Eddie, we love you ... We're behind you All The Way Coach!!!" Numerous fans wore orange shirts with Sutton's face on them.

Oklahoma State kept the game at a slower pace in the first half and limited Texas to 29.2 percent shooting, a combination that a resulted in a 31-20 halftime lead for the Cowboys.

Conference leader Texas (22-4, 10-2) struggled against the physical defense and couldn't overcome early foul trouble to guard Daniel Gibson. The Longhorns led only twice, the last time at 9-8, and never came closer than 10 points in the final 11:48.

"We came into a place where we knew they would play tough and play hard," said Texas forward P.J. Tucker, who scored 12 points. "We knew it was going to be real tough. They came out with more fire and desire and they did it."

The closest Texas came in the second half was at 40-33 with 12:53 left. David Monds scored seven points and Curry hit two three-pointers in a subsequent 15-4 run by the Cowboys that ended with Oklahoma State up 57-39 with 7:19 left.

"We hustled. We trusted each other and we were unified," Curry said. "There is no such thing as a man-to-man defense. It is a team defense." 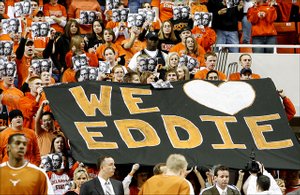 Oklahoma State fans show their support for coach Eddie Sutton, who was injured in an accident Feb. 10 and subsequently charged with drunk driving. On medical leave for the rest of the season, Sutton called to congratulate the Cowboys after Sunday's 81-60 victory over No. 6-ranked Texas in Stillwater, Okla.

Oklahoma State lost 80-46 to Texas on Jan. 23 in the teams' previous meeting, but in the rematch, the Cowboys committed only 10 turnovers, their second-lowest total of the season.

"I'm not going to take anything away from them because I thought they beat us in every way you could be beaten today," Texas coach Rick Barnes said. "From looking at my team out there, I thought they acted like it was going to be (like the first game) again."

"We're a team with great confidence and swagger," Gibson said. "I know that we've lost a game, but we've got guys on this team that's going to take on that challenge knowing that we've lost and come out and prove that we're still a great team."